We use a Builder Extreme printer which has a large bed (700mm square) and uses large nozzles (0.8mm - 1.2mm) for big prints. We've found that the support generation in S3D often can't handle large parts with complex details:

At fine resolution generation (default 2mm) it creates lots of small individual pillars which due to the nozzle diameter either don't come out in the gcode at all or are made of broken lines that presumably wouldn't come out in a print (see attached screenshot 2mm supports).

It would be good if there was some way to be able to generate support for complex prints like this, either by improving the generation of low resolution supports so they fully support the part or by allowing additional "outlines" of supports for fine resolution supports. For example you could choose to add a 3x3 or 5x5 outline of additional 2mm pillars around every generated 2mm pillar. 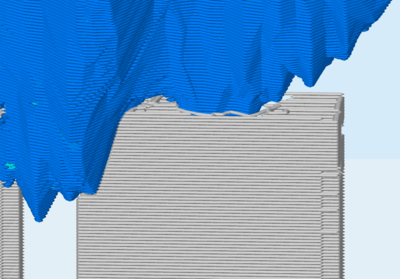