Could we get some more optional settings on solid fill parameters? There are two big ones I'd like to see:

-Solid fill at a certain minimum area threshold. This is pretty basic and its absence in Simplify3D is puzzling. Even better, allow this option to include unfilled areas that are surrounded by solid fill, not just limited to areas inside perimeters. The first attached picture shows an example of this with all the unfilled dots underneath a set of rivet cosmetic features. Those should really just be filled in, leaving them blank is a waste of time and weakens the part without saving much of any material.

-Solid fill when the area would have a certain threshold percentage already filled normally. For example, an area is going to be 80% solid fill because of the top solid layers but isn't filled all the way due to some raised feature. If the 80% was what you had set as your threshold then that entire area would be solid filled. This would help a lot to prevent gaps on prints with lower infill density or when your filament has poor bridging characteristics. In many cases it will probably also be faster to just to fill the whole area instead of picking out some small complex shape to leave blank. The second attached picture shows a layer that absolutely would be better off solid filled instead of having small missing slots. 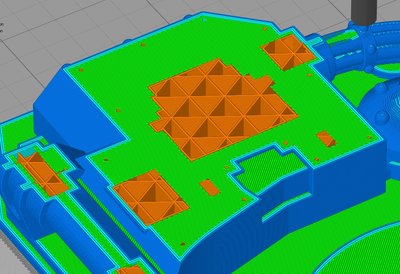 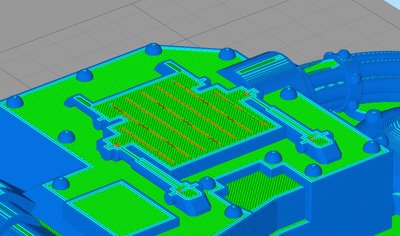