I have two problems with that process that I wish were easily solved without having to do a bunch of hack work.

1) Stop-> Retract
At this step, the hot nozzle is positioned wherever the print stopped. Depending on the tool change retraction height and speed, it can be enough time to damage the underlying plastic since the nozzle isn't moving.

2) move to prime pillar -> purge
At this point, the purge location at the corner of the prime pillar starts building up extra plastic because it's difficult to tune the toolchange retraction height to be just right and usually you get a bit of extra filament after you've been printing with the other nozzle for a while.

Results of problems are
1) print blemishes and 2) extra plastic purged onto the prime pillar directly causes nozzle interference and as the pillar becomes higher, it can actually knock it off the print bed.
You can make the prime pillar wider but as other threads have noted, that can waste a LOT of filament. For me, it significantly increases the build time.

Pic of prime pillar that got bumped over.

I know there are workarounds to these issues with toolchange scripts, parameter tuning etc, but the point of this post is to make it a lot easier and hassle free. 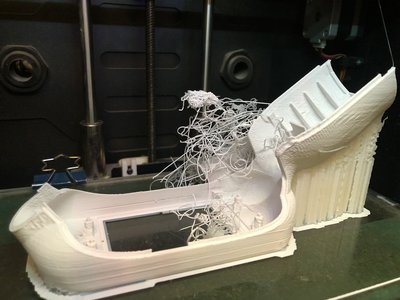 Both problems could be solved and be much much easier to work around if the prime pillar was controlled by a number of perimeter shells, where the width was the inside portion instead of a solid portion,. Like the brim.
Prime Pillar Width: 5 // 5mm of inside portion of the box
Prime Pillar Shells: 5 // 5 shells

The new process at toolchange would be:
* Move to prime pillar center // solves problem one of not stopping the hot nozzle on the printed part.
* Purge into center // solves the 2nd problem of purging onto the pillar itself and possibly creating bumps
* Move to perimeter of pillar and print N number of shells
* Layer print.
Post Reply
1 post • Page 1 of 1