When printing using translucent materials, the infill pattern can add beauty to the printed object as well as strength.

Using the current system, there's not much options when it comes to printing translucent material where you want the infill to look beautiful. There's only so much you can do by specifying the angle of straight lines used to infill different layers. With "Use random infill placement" turned off, a pattern of 0, 60, -60 looks nice, like a bunch of triangles. -45,45 or 0,90 looks nice, like boxes. But these are all still straight lines on a layer basis, not actually shapes being drawn on each layer.

There's been some discussion in another thread about having honeycomb infill, because of its strength, and it was brought up that this infill pattern might be patented (really?). If so, I can see the reason for not including it. But to get around this, Simplify3D could allow users to define their own custom patterns.

There are many different ways of implementing this. A simple way would be to allow users to enter the pattern using a series of X/Y "move to" and "line to" coordinates in a text editor. The coordinate boundaries could be a simple 100x100 grid.

If I wanted a hexagon to make a honeycomb structure (the strongest connecting regular polygon shape) I could define that using a different set of coordinates.

This system of coordinates is pretty basic. Something a little more complex and flexible could be used instead, such as points and angles, or freehand drawing, etc.

For the ultimate in infill control, I would love to be able to define the infill pattern as a 3D object. Maybe an STL file that could be loaded, that Simplify3D simply repeats inside your printed object as infill. For example, lets say that I wanted to beautify my translucent print using pyramids as an infill structure. I would load an STL file of a 3D pyramid structure, set the infill percent, and then Simplify3D would scale it accordingly and repeat it throughout my 3D print.

This might not be all that simple to do, but it would be fantastic for transparent prints.

If it was possible to create custom infill, where we design our own line patterns, then I could create an almost true honeycomb infill. A true one is not really possible on an FFF printer (it can't draw a complete hexagon without a weak bond point somewhere in one of the connecting points, but it can get really close). Most slicers don't bother trying to make a bunch of hexagons and just use a bunch of "zig-zag" lines to simulate a honeycomb.

Here's the infill pattern I would like to have as infill. Note the lighter area is a full extruded line, while the darker area shows the weak bonds between the extruded lines. Note that in my infill pattern, we have almost complete hexagons. This will be very strong. It will take a long time to draw because of all the moves needed, but sometimes you just want strong infill. 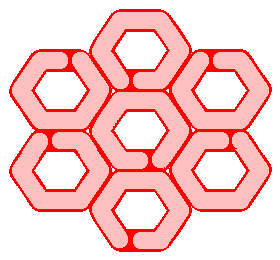 Here's the typical "zig-zag" style "honeycomb" infill some slicers have. There are several variations on this type of "honeycomb". This is quicker to make, but it is structurally inferior. 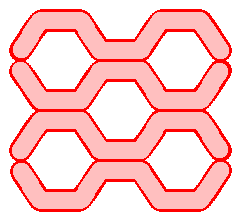 Here I highlighted in yellow all the horizontal (or vertical) weak bonds the "zig-zag" style "honeycomb" infills usually have. Notice all the weak bonds that run in the same direction horizontally across the pattern. It will tear apart vertically because of these horizontal weak bonds. The weak bonds don't form all the way across from left to right. There are huge gaps between the bonds. My infill doesn't have that problem at all. It's equally strong horizontally and vertically. It's still not a true honeycomb, but it's a heck of a lot closer to a real one than this "zig-zag" style is. This is bad. This can be alternated layer by layer to fix this problem, by alternating between horizontal and vertical weak points. But it still won't be as strong as my infill because the diagonal lines in the pattern are single wall lines. In my pattern all walls in the honeycomb are two walls thick. 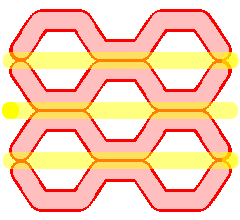 I like this alot!
Nice way to get around any patent.
/Michael, Denmark 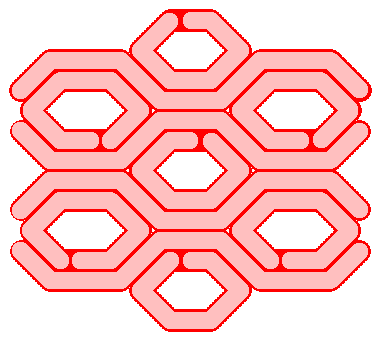 I would love to be able to test the various different infill ideas I have. Making an STL file with infill already in it is pretty difficult to do. Is there a slicer program that allows custom infill patterns?