The external infill pattern can really affect the beauty of your 3D print's top surfaces.

I would like the ability to make custom external infill patterns. I'm not sure what the proper way to do this is.

If the pattern could be totally customized by the user, that would be fantastic. You could provide a few defaults built-in, but allow the user to really go crazy with the patterns.

I've often thought that it would be nice to have an external infill pattern that mimics wood grain. Another nice one would be a cloth-like stitched pattern. Maybe some concentric cubes. A triangle pattern maybe. I'm sure lots of people will have very interesting ideas for custom infill patterns.

The difficult thing I see in this is how to allow these patterns to be defined. That will really take some thought. Maybe there already exists a file format that has such patterns defined that could be used? The patterns need to be 100% infill, so they can't have empty spots in them. Maybe someone else has a good idea on how to specify the custom pattern? 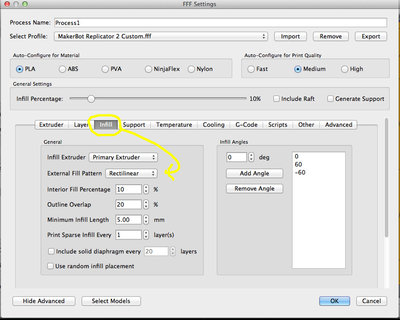 KeyboardWarrior, in the image above you can see that in Simplify3D there is indeed EXTERNAL INFILL. In the attached image, on the Infill properties page, the EXTERNAL INFILL is specified by the External Fill Pattern option. You can select two options, either rectilinear or concentric. Concentric makes a circular pattern, while the other simply uses the INTERNAL INFILL pattern set at 100%.

Note that it is possible to make an object that's 100% shells, without infill, but this is very slow and takes a lot of plastic, so most people use internal and external infill and just a few shells.

You cannot call the external infill a shell unless its drawn using shells. The external fill patterns is not a shell. Shells are outlines of a layer and are typically the outermost portion of a layer and are typically drawn without patterns, just outlines. Infill is typically drawn with patterns, whether external or not. However, you can have an object drawn without EXTERNAL INFILL, and just shells, like I said above, it's slow and wastes plastic.

Yea, thanks for the clarification

I'll just chime in and mention that it'd be fantastic if we could have alternating external infill - IE, bottommost layer is concentric, next is rectilinear, then rectilinear, then concentric, etc etc. I tend to print with 4 bottom/top layers - and while Concentric is great for bridging and other such things, it tends to get a little ribbony in spots (especially near edges)

I definitely see the usefulness of having alternating external infill patterns available. Certain patterns are great for some things. There's no perfect infill pattern that works best for all parts of a print.

I think the infill is a weak point in Simplify3D, and it shouldn't be. Infill is very important both structurally and aesthetically.

Essentially, I would like like an "Outermost External Infill" option that's independent of all other infill patterns used for internal and external infill.

I wonder if the technique of using multiple settings within one model would help you?
http://www.simplify3d.com/support/tutor ... f-a-model/

For example, I build the Colonel model with 4 settings: http://www.thingiverse.com/thing:108867
I changed the external infill in each section - not with any real purpose, but just to see if I could vary the settings easily. I'll attach my Factory File.

I might not have figured out everything you wanted to achieve, but I wanted to pass along the idea.

Tri-lite, you give a good example of one of the great features of Simplify3D. No doubt, that's one of it's strong points. That layer profile trick does some of what we're talking about for sure.

With that trick I can even insert custom G-code at the start of a specific layer, and only have the custom code happen 1 time. It's a great feature.

The same holds true for G-code. All G-code should be customizable.

The more stuff you allow users to control, the better the software will be.

Give more customization to the user. Don't have so many rigid things. The main reason I don't like other slicers is because they are so rigid. It's the flexibility of Simplify3D that makes it so great.

It has been mentioned in previous posts. I would like to see a tool that allows the ability to create or edit infill patterns.
Last edited by S3D-Jake on Mon Aug 26, 2019 10:51 am, edited 1 time in total.
Reason: merged with existing thread
Post Reply
9 posts • Page 1 of 1