sometimes slowing down a print doesn't really help when printing a single object.
Take this one for example (Ieyo Bust, https://www.thingiverse.com/thing:297846): 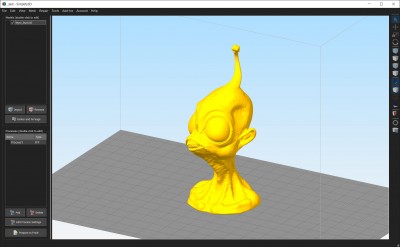 Depending on size/model there's sometimes very fine features along Z which need a certain amount of time to cool
down. Slowing down the print using "Speed Overrides" on the Speeds tab doesn't really help here - because it will
keep the extruder above the object even longer, making matters worse.

In cases like this I ended up using a simple thin walled box, scaled to a height to fit the object. While this does work it does
come with some drawbacks. How long it will take to print that tower depends on various settings (perimeter speed). And unless
you're into modelling a specific "cool tower" for certain objects you end up with more material and time wasted during the
print than necessary.

So what if instead of slowing down the print there would be some kind of "cooling tower" option inside the speed overrides?

It could generate some kind of "U"-shaped single wall feature which adds/removes print time depending on the set layer duration/threshold.
So instead of slowing down 30% because of reaching the limit -> add the difference (actual vs. threshold layer time) to the "cooling tower".

A solid base for adhesion would be a good idea. And I'm suggesting the "U" shape because thin objects (box, 1mm x 10mm x z height)
tend to wobble a bit after reaching a certain height on printers using a moving bed as y axis. A simple cylinder would probably also
work for this.

Trying to explain this: 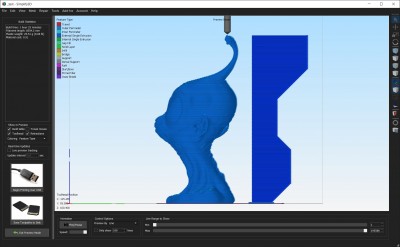 Instead of slowing down the print, print time is added to the "cooling tower". 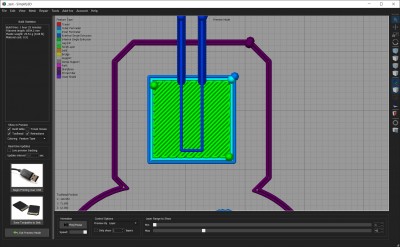 Simple base for adhesion and single extrusions (current or minimum extrusion width to save material) at a given speed.

Example:
"Cooling Tower" is printed at 5mm/s -> each second below the speed overrides threshold adds another 5mm to the "U"-shape (maybe including necessary travel times).

I've used multiple processes on the skinny bits of a print like that to control speed, temperature, and cooling. Takes a fair bit of trial and error to get into something like that. I've added a part to the print for cooling purposes, similar to what you are describing.

zemlin wrote: ↑
Sun Aug 30, 2020 9:43 pm
I've used multiple processes on the skinny bits of a print like that to control speed, temperature, and cooling.

Exactly what I was using, yes. 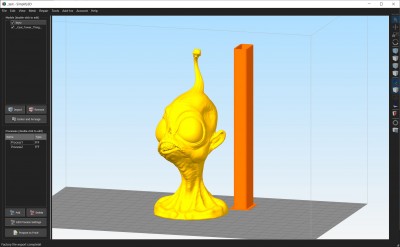 Process2 is only there for the "tower thing" at a slow speed to get the hotend away from small features.

But S3D v4.1.2 doesn't behave as before and always prints 2 layers of each process before switching. So
in the end it's not only a bit cumbersome to set up - on some details this can mess up things pretty fast...