I've found when there is a feature on top of a surface, a top layer of one surface only goes under a feature by one perimeter, even verified in the g code simulator, and even if I've specified more perimeters. This weakens parts, and sometimes I've experienced some curl back too, leaving gaps.

At the very least, I think top layers should reach the innermost perimeter of the layer that's above it. I'd actually like an option to go even further, stitch to the previous layer's next infill line if it's a flat surface, for me, meaning the same Z height across. That way the material laid down is less likely to peel back up while trying to build a boss on it. If I had an ability to place solid infill diaphragms at specific layers, rather than a fixed interval, that would help a lot on many parts as well. 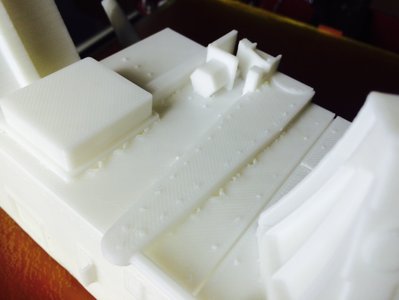 nothing wrong with your request however you really should not be seeing that happen. i have only gotten this a small handful of times if the infill is extremely low and i dont put enough top layers on it.

If my profile is correct, the setting was 10% infill, 5 top layers. This doesn't happen a lot, but this one part took 300g of filament and a 15 hour run. Now I'm evaluating my options, such as switching slicers. Switching slicers is a long haul because of how much work it takes to dial in the settings just right, but if this issue isn't resolved soon, I might need to, at least for parts like this. I like this software a lot, I hope this adjustment can be made.

I contend it would happen a lot less if the top layers were extended enough to overlap better. I've been bitten by weak boss joints before, and it took me a some work to understand what was going on, because it really is a very weak point.

I've seen that exact thing when I was tuning some large prints.
You can help the effect by using more infill directions. I use 0, 45, 90, -45. Then with 5 top layers you're guaranteed to have at least one run parallel to the next edge that will continue printing vertically. The empty triangles come from having 45,-45 and they just don't have enough solid layers to build up over the empty infill spaces. Random infill placement can help but it isn't always a great solution.

This is one of the reasons I've requested better infill options though. If you do 0,45,90,-45 now your infill is only 25% as solid as if you had just one direction. You can of course increase the infill width but you can't realistically increase it to 300% of original. I love the new solid top layers for support but I was really wishing they had the solid top layers for infill too. The way I'd like to to work is something like 3% infill in one direction, not randomly placed. Then go to about 25% infill for 3-5 solid layers but have the direction change, then finally print the solid layers. This I think would help your big prints save plastic but still have a more robust part.

And yes, better stitching of the small parts would be great. I had a couple prints that were over 20 hours and I ended up razoring off the features, reprinting them and then sanding/gluing to fit because I didn't want to do an entire reprint again.

I am having a similar issue where when you are stacking one shape on top of another, only the outside loop is conncected to the solid part of the model. This makes it very easy to just crack off the shape sitting on top...its not really held on by anything but one single loop and some infill...which the infill only has a few connection points itself. I have used Kisslicer quite a bit and it will put solid infill under parts that are going to be built up on top of infill. The only way to currently get s3d to do what I want is to make another process...and create 100% infill for that layer. This if fine if you only have one spot you need to do this too...but a build plate with many parts or a more complex model would make it way too much work. Please fix this...and while you are in there...and some type of stacking infill...PLEASE!!!:) 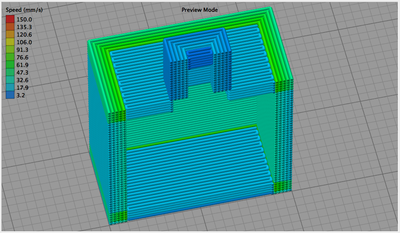 jimmybuckets wrote:I am having a similar issue where when you are stacking one shape on top of another, only the outside loop is conncected to the solid part of the model.

The picture above shows this very obvious slicing bug you're talking about in Simplify3D 2.2.2 which has been there for ages. It happens with all objects that have the features of the above object, even with single STL models, which the above was made from. Here's the STL that makes that difficult to print object:

My picture shows a cross section view. This is a small box on top of a large box. It's 1 STL file, and should print as a single object, and it does, but very poorly. I told the slicer to use 5 shells for all parts of the print. I used NO INFILL to help illustrate the bug. Normally you would print such an object with infill. You can very clearly see that Simplify3D only connects all 5 shells on the outer corners of the print. On the corners where the top box and bottom box meet Simplify3D only makes 1 of the 5 shells connect. All 5 should connect!

This produces an EXTREMELY WEAK POINT.

This is clearly a bug that's been in Simplify3D which keeps getting overlooked by the developers.

I think a lot of people don't realize that the slicer has this bug, and wonder why certain shapes are so weak, and attempt to fix them with lots of infill.

We should not have to use infill or diaphragms to get around this bug.

This should be considered a TOP PRIORITY BUG to fix. In my opinion it's THE NUMBER ONE BUG in the slicer. And yet it gets neglected over and over again. We need to bring this to the attention of the engineers. 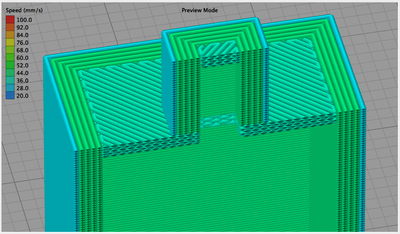 This is again showing the problem in Simplify3D, but this time the top box is slanted. Notice how the right side of the top box is attached correctly, but the left side is not. Strange. 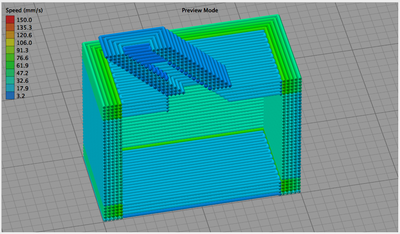 Yes this is is exactly what I'm talking about! When I mean stacking infill I'm talking about infill that has no gaps layer to layer. Like honeycomb or the triangular pattern Craftware uses. These are important enough flaws that I may have to bite the bullet and go back to something else. I would hate to though.
Locked
44 posts