Many of my parts have holes in them for screws, with a hex shaped socket at the end to capture a nut. Many times I'd like the walls of these bolt holes to be 4-5 perimeters thick to give it extra compressive strength in that region. I can change the global perimeter count to 5, but then I end up with 5 perimeters on the entire model, which is massive overkill in virtually all of my models.

In Slic3r you can apparently specify a modifier mesh to make some sections behave differently than others. That's a better solution, but it's still a pain as I have to make a second model just for modifier meshes.

It would be great if we could click surfaces to which we could specify extra perimeters similar to the way supports are specified.

(apologies if this is already a request)

This is a feature I'd use as well. Good idea.

How do people increase the amount of material near holes for strength while maintaining a reasonably small infill for the rest of the print? In particular, I would like to use heat-set threaded inserts, but this requires a decent amount of material around the hole. One way that might work is if one can say "slices between X and x+50 should be 100% filled." Ideally, one would select the hole, specify a diameter and have that that volume be 100% fill. I hope the question makes sense.

I personally do it by using a lot of perimeters for that print ... not ideal solution but works for inserts ok for me
gcodestat integrates with Simplify3D and allow you to
Calculate print time accurately (acceleration, max speed, junction deviation all taken into consideration)
Embed M117 codes into G-Code
Upload your G-Code directly to Octoprint
open source and unlicence

For sections of model that you want extra perimeters you can do this by splitting up the model a bit. Create a shell with the inner dimensions that you want and a thickness of what you want minus the perimeters in the print. Subtract that from the main model, then align the two models in the software. You can then control the volume around the hole or cavity separately.

It's not exactly perfect in some cases, as the perimeters of the two models are printed separately, so you can end up with a seam between the two models like you would in a dual extrusion print, but it works well in most cases.

Doing it as separate parts (solids, not shells) with individual processes work well. It's the only way I'm able to do it.
As an example: Using Solidworks to model the complete part, then cutting the boss out and making two individual parts.
Then, process one with 2 shells, the other (the boss) with 6 shells (to yield 6 outside and 6 inside shells around the boss... No witness lines.
Images attached. 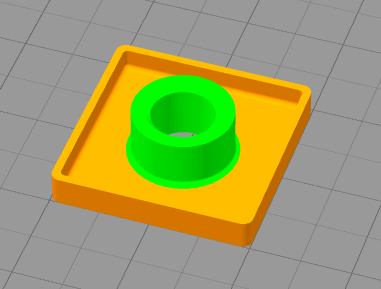 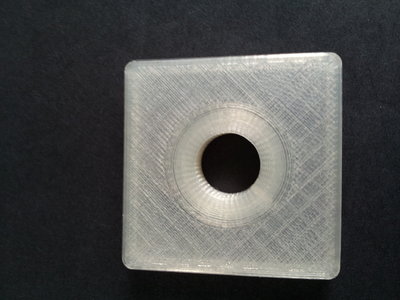 I too, would like to know if there is a mesh modifier option so that I can print variable density - particularly around location features on parts.

It would be a time saver to include this as a feature, however you can do this by importing the hole/wall geometry as a separate mesh, creating two separate processes with different perimeter settings, and printing with the "Continuous printing: layer-by-layer" option selected.

I would love this feature as well, but I think it could be expanded to more general things and just made process-specific.

I'm picturing 2 different 3d selection tools. A cylinder and a cube. Maybe a sphere too. All adjustable with widgets. Using these tools you could select various areas of the mesh and just assign a process. So you could use the cylinder tool and select a hole and add 5 perimeters only to that hole and have the rest get whatever is otherwise set. You could also select a cubic area and assign a different infill percentage (or any other things that could normally could do in a process). Or combine them and have a beefed up perimeter around the hole with a more dense infill to strengthen only that area instead of the whole layer.

So basically, be able to assign a process to a selected area within the model with new tools.

I think this would be huge and useful in many areas!
Post Reply
11 posts