I've been thinking for some time that it would be really helpful to have a feature to print an internal perimeter so that the top layer has something to connect to at the end of each line without increasing the infill or number of top layers unnecessarily.

This would be more efficient in terms of material usage, and would make life a little easier in getting nice top layer surface.

I've added an image in here trying to explain what exactly I'm asking for.
If it's not descriptive enough let me know and I'll have another go at it. 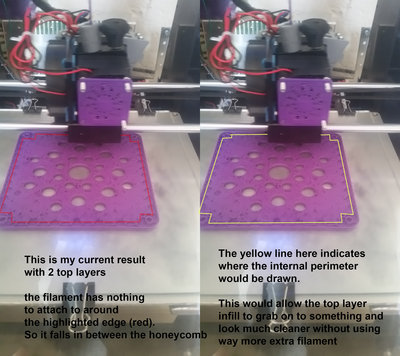 S3D also already has a field that allows you to overlap your infill on top of your perimeters. In the infill tab, look for "Outline overlap." Set to anything but 0, your infill will overlap your innermost outline (perimeter). Of course, the higher the number, the more overlap.

by dkightley
I think I understand what you're asking for....but agree with sstantz that the infill overlap can be used to get a good grip between the inner perimeter and the top infill.

If you insist on wanting to have an extra perimeter (or two ) on the top layer (or top two layers) then it is possible to do that within the current software functionality for flat topped objects by using the Variable Settings feature introduced in v4. Simply introduce a split at one or two layer thicknesses down from the top surface....and increase the number of perimeters for the upper process.

by gearsawe
Actually you would set the lower layer to lets say 2 walls then the upper to 1 wall at the split. This way the top layer would sit on the edge of a wall.

by VibroAxe
I know this is an old thread, but was a resolution to this ever implemented / found. The existing functionality works well but not when dealing with vertical walls stacked onto an infill. I find that I am having to drastically increase the top layer count or the infill percentage to get a decent bond between two parts


When the top section of the lower is printed the top layers are drapped accross the infil at 45o as expected, however without an "internal" perimeter the edges are rough as they are floating in space. When the first perimeter is laid for the upper wall it's laid on top of the new infil section, with only a single overlap of the outer perimeter between the two layers. This seems to generate holes where as if the "internal" infill had perimeters then there would be a solid edge to bond with