Is Simplify3D worth the cost?

Is Simplify3D worth the cost?

Honest question, though it may seem a bit snarky. I'm just tired of companies not being straight forward with their customers and hiding behind language, guilting or ransom tactics.

I've been using a few different slicers and have seen Simplify3D mentioned a few times in various locations as a recommendation. I'm looking at their website and am thinking about purchasing.

I am a bit reticent, however, they have a ton of weasel/marketing terms, such as: "the most powerful 3D printing software available" and "industry-leading". And it looks like the $150 "purchase" price is actually an annual license, as the site implies that you'll only get updates for a year. They don't list any renewal fees, so my assumption is that they will spring that on you a couple of months before your license expires via emails proclaiming "detrimental loss of security and functionality, renew now!".

Am I off the reservation here? Would you recommend it?

no, dont buy it. they are a dead company, check the forum posts about it. It 'IS' a decent slicer, but once the company goes belly up you wont be able to use it anymore since it relies on internet authentication.

Even though the software has not been updated in 2 years, it still works fine. None of the bugs that the software still has bothers me. Biggest concern is their licensing/activation model. They require online license checks every time you start the software and if their server is not reachable, you are done.

For requiring a company that is pretty much out of business, this is a high risk and I would not bet a penny on them being around - or providing the activation server - for another year.

So, software is decent, but not worth the risk of losing your investment. Oh, but it is buy once software, not s subscription.

airscapes wrote: ↑
Thu Jul 29, 2021 4:55 pm
I would suggest if this is your first slicer to go with Prusa slicer and learn that as it will continue to evolve unlike S3D

Just be aware that Prusa slicer does not include coast or wipe, so it is only suitable for controllers with pressure advance.

And be aware of roughly 50% of things said on the internet being wrong... 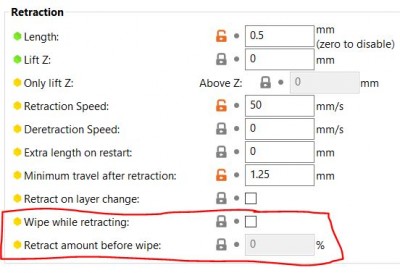 (from PrusaSlicer 2.3.0)
Yes, it does work a bit different - but Slic3r/PrusaSlicer does have a wipe option.

On various direct drive machines using materials like PLA/PETG I've never missed coasting. This might be different for some
machine/material/bowden/extrusion width combinations.... but saying it's only suitable if something like pressure/linear advance
is used is wrong. Also you can't really compare them, coasting doesn't have any effect on extrusion except the small section before
retracting.
I do know a few people who disable LA when print times matter and they can live with the minor decrease in (corner) quality. But
none of them suddenly gets massive stringing or anything like that just because LA isn't used. Even on pretty cheap and CR-appy
machines.

I will take that correction, and give it a try again. In an instance like this, it's nice to be wrong...probably outdated info on my part.

I tried Prusa slicer over a year ago, and could not find coast or wipe, so I searched...IIRC, I found a forum thread where Prusa themselves said they would not add it because their controllers did not need it due to havingi pressure advance. Apparently, demand for the feature for other controllers superceded that.

These settings mostly comes in handy when you are trying to print fast. At slower speeds, it is not necessary.

Edit: This is just one more example of how S3d is falling behind by standing still. It was once the best, but now it's difficult to find any features that it excels at over o/s options.

@parallyze, I looked into it again, and Prusa Slicer still does not have coast. The screenshot you showed does not do the same thing. The request for it is being +1'd regularly:
https://github.com/prusa3d/PrusaSlicer/issues/246

(In that link, somebody shows a screengrab of the same setting you posted, and it is followed up with an explanation of how it is not coast. That setting does not stop e moves before the travel is completed--but that is what coast does.)

tenaja wrote: ↑
Sun Aug 01, 2021 9:34 am
@parallyze, I looked into it again, and Prusa Slicer still does not have coast.
The screenshot you showed does not do the same thing.

And I've never said that Wipe equals Coast... I do know the difference.


parallyze wrote: Yes, it does work a bit different - but Slic3r/PrusaSlicer does have a wipe option.

Could you point out where I supposedly said Slic3r/PS do offer coasting?!

I'm not using PS or Slic3r very often. But Wipe was included in Slic3r years ago, although working a bit different than
in the current release of PS (there was no option to retract before the wipe movement, only "wipe while retract").

Maybe this was a bit misleading:

parallyze wrote: Also you can't really compare them, coasting doesn't have any effect on extrusion except the small section before
retracting.

I was talking about LA vs Coasting there, not Wipe vs. Coasting.


tenaja wrote: Edit: This is just one more example of how S3d is falling behind by standing still. It was once the best, but now it's difficult to find any features that it excels at over o/s options.

I'm not trying to defend S3D here. It is very disappointing what's happening with S3D. And I feel sorry for the people
who I talked into buying it up until ~18 months ago.

But:
So far it still is my favorite slicer. In my opinion the user interface is much better than what the competition has to offer. And
many of the often requested features are things I've personally never really missed, like gyroid infill. Or variable layer height. Or Ironing.

Also S3D is still the fastest slicer from the ones I'm using. Not really that noticable on smaller every day prints, but slicing something
at ~0.1mm layer height using supports and a z height of 200mm+?

Still I'm trying to get prints done using anything BUT S3D by now. As often mentioned the activation thing might be some kind
of "sudden death" one day. So I have different slicers up and running for my printers. Just in case.

Vase mode in S3D is also one of my favourite implementations. And while PS does offer modifiers you can't set up mixed
prints with vase mode enabled/disabled along Z as easily as in S3D.

I also prefer the hotkeys/configuration options in S3D, but that's covered by "user interface", I think. Regarding feature requests:
Isn't it amazing how many years neither Cura nor Slic3r did implement a custom mouse button configuration? Configurable hotkeys?

Another thing I don't like about S3D: It's profile handling. I think others do have a major advantage in many situations, but this may
also be dependent on ones specific needs.

Retraction placement is much better in PS (especially since the introduction of paint-on supports).

There's so many things different between all those slicers, I think it's really hard to recommend "the ultimate solution" before somebody
did gather some experience in 3d printing. Also things might be different if you're printing customer/own designs or stuff from thingiverse.

Sometimes I'm using the infill angles to achieve certain looks/surface finishes. Imagine how surprised I was to find out you can do so just
fine in S3D, Cura but not in PS.... S3D/Cura offer a list of angles like 0°, 90°, 135°, 45°. PS only allows you to enter a single value which
will be printed at +90° every other layer, that's it.

Anyways, back to topic:

I just wanted to correct your wrong statement(s):

tenaja wrote: Just be aware that Prusa slicer does not include coast or wipe, so it is only suitable for controllers with pressure advance.

Which are simply wrong. Slic3r/PS does have a wipe option. And you can use PS very well on machines without PA/LA. If
I didn't miss it the OP didn't tell us about his printer(s)... so missing coasting might be completely irrelevant to him.

I'm not trying to attack you or something, so I'm sorry if it did feel that way. I'm just a bit tired of so many one liners these
days that aren't really accurate.


DavidMalan wrote: I'm just tired of companies not being straight forward with their customers

As much as I like the product I can't really recommend it at this point then.

I think you should not buy it because it is not updated often. there will be many errors when using them
https://chedodinhduong.xyz/
Post Reply
16 posts