I'm using an Alfawise U30 with Simplify 3D.

My printer doesn't respond to the T0 command generated into the GCODE file.
That command is after the GCODE start script. I have to delete it to be able to start printing.

I tried with Cura and Octoprint : i don't have any problem with the same GCODE file.

Is that a firmware problem, or a conflicting between my printer and Simplify 3D?

The Alfawise U 30 is a single extruder machine.
Therefore you dont need "T0" in the starting script; deactivate the line by typing a ";" in front of T0 or delete it.
Nevertheless T0 must be definited as the First temperature identifier in Tab Temperature of the settings window.
And also the extruder motor and the temp-sensor must be connected to their T0-pins on the mainboard.


T0 ist the name of the first Temperature Identifier what is identical with "First Extruder" , when a machine is equiped with two extruders (dual-extruder) the 2nd one is named T1

Have a look to the attached picture. This refers to a similar Anet A 8 machine. 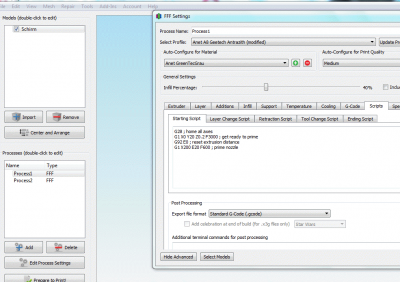