Making objects as solid as possible

Making objects as solid as possible

I was reading a tutorial to make objects more solid by increasing overlap, slowing speed, and increasing extrusion by 150%. When I am doing rapid prototyping, especially with water involved, I want a 3D print to behave more like a solid injection molded part than a honeycomb-filled dainty art piece.

Has anyone tried to do this in Simplify3D, the whole SOLID BLOCK OF PLASTIC print settings? I was impressed with the Instructable for making airtight prints. I'm not sure if there are any features specific to Simplify3D that would help me eliminate gaps within the print.

I've been a long-time Simplify 3D user, I love the simplicity of the slicer and how hard it is to screw it up when you are new to 3D printing but how flexible and powerful the software is when you want to dial in a specific change or test a setting.

Why not use 100% infill this is like making it solide

I use this script frequently - tweaking the M221 value when needed. I run single extrusion fill at 50% speed because it can be a lot heaver than the rest of the print (I allow 200%)

Hi, folks. Just starting to work with 3D printing, and of _course_ my first actual application needs to be watertight. (And light-tight; it's a piece of photographic equipment).

I saw Zemlin's script, but I'm not sure how one provides this to Simplify3D. Tried blindly appending it to the startup script in the process, and I can't see that it had much effect, so I'm presuming that was the Wrong Place. Could someone provide a bit more guidance?

If it matters, I'm using one of Monoprint's "Select Mini" cartesian printers -- just barely large enough for this first part, *IF* I can get the surfaces to seal.


For what it's worth, I've also considered rotating the part 90 degrees and printing it "on its ear", so the surfaces where a seal is most essential would be edges of the print, which do seem to seal pretty reliably since they're face-to-face. Of course that also puts the weak direction in an orientation where it's more likely to get stresses that could break it,, and it does leave some other surfaces as potentially leaky (though at least some of them are curved, so there might be enough inherent overlap to get a reasonably solid surface). An improvement over what I have now, and I'll do it if I must, but there has to be a better answer.

(Also for what it's worth, suggestions in the Facebook group for this printer have been limited to "Apply a sealant after printing." I don't really like that answer since I don't want to raise further questions about interaction of chemistries.)

To add a post-processing script to Simplify, go to the SCRIPTS tab and in the window labeled "additional terminal commands for post processing" - the script code goes there. 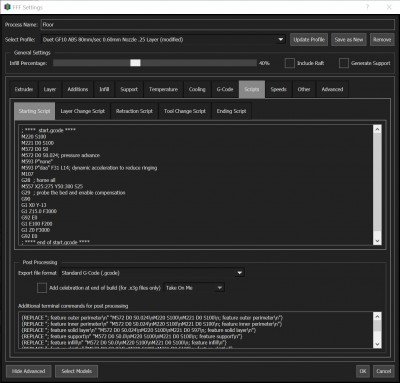 Thanks! I'll give that a spin after getting some of the other projects a step forward...
Post Reply
6 posts • Page 1 of 1