If you're intimidated by G-Code, it's actually a lot easier than it looks, a great way of learning and testing is to use the Communications tab over USB connection and send your printer a line of G-Code at a time to see the responses. One thing to keep in mind is that different printers will accept different commands to accomplish the same task. This is just something you should keep in mind if your wondering why a certain G-Code command does not work with your printer.

G-Code is read line by line, the printer will accomplish one line of G-Code, then move on to the next. Always capitalize the letters in G-Code, spacing is important, and anything that comes after a semi-colon will not be read on that line. The two lines below are for home-all, and then move to 100, 100, 100 at a certain speed. The printer will home all 3 axis, then once that is done, move to the next line of G-Code.


The link below is extremely useful, a glossary of G-Code commands for RepRap style printers
http://reprap.org/wiki/G-code 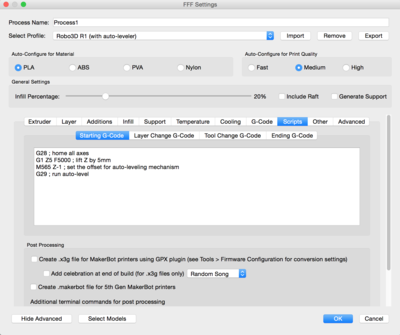 This is the G-Code that will be ran after heating up but before your print. Traditionally, this will consist of homing the printer, potentially purging the nozzle, wiping the nozzle and running an auto-leveling function if the printer supports it. In addition, you can add PID values, or set toolhead offsets here if you'd like to.

Layer Change G-Code:
I personally haven't had to use this, but I'm sure that there are some excellent reasons/ideas to use for this. If you'd like for a G-Code script to be inserted in-between each layer, than you can simply place it in this tab. One interesting use of this, is for the FlashForge Dreamer, to have the lights blink in between each layer, however that can be a bit too much at times! The placeholders that are available for this tab are below:

This tab will insert G-Code on tool change commands. These commands can help do a ton of things for multiple extruder prints, especially if using the IF command functionality. For instance, if you wanted to change the temperature of your extruders (T0, and T1) for each tool change switch:

If you were using one process (printed part with one extruder, support with the other), you would only need this script in your one process. However, if using multiple processes, you would need to copy+paste this into each process.

{IF OLDTOOL=0}G1 E-10 F1800 - this will only include the line that follows the {IF} brackets if the old tool (the one that was active prior to the tool change) is tool 0. You could use scripts like this to have different tool change retract distances for different tools
{IF NEWTOOL=0}G1 E10 F1800 - similar to the above command, however it checks the new tool (the one that will be active after the tool change)
[old_tool]
[new_tool]
[current_position_z]

Usually the Ending G-Code's purpose will be to get the nozzle off of the part and then turn off the heaters/motors. The Ending G-Code below is taken from the RoBo 3D profile:

The placeholders available for the Ending G-Code:
[current_Z_position]

Create X3G file for MakerBot printers using GPX plugin: This is enabled for all of the MakerBot(Not 5th Gen MakerBot)/Sailfish style printers. The conversion will take your Machine Profile from the X3G tab of the Firmware Configuration and use that to convert your G-Code file to X3G. When you click Save Toolpaths to disk after slicing, the X3G file is automatically created when you save a .Gcode file.

If you are using a custom GPX ini file, this a very important section, as you will need to reference GPX in this section rather than use the built-in functionality. There's also a ton of post-processing commands below that help for those who are working with custom firmwares, or doing projects with their printers that require more functionality.

Using the Post Processing box would be if using a MakerBot/Sailfish style printer that doesn't have traditional steps-per-mm values, you would need to do the following:

1) Use the Machine ini example to set a text document ini with your machine information: https://github.com/whpthomas/GPX/blob/m ... achine.ini
2)Save the file as GPX.ini, place it in the Simplify3D installation folder
3)Place the following in the post-processing box: GPX [output_filepath]

{REPLACE "E" "A"} - search and replace for the text within quotes, in this example every "E" character would be replaced with an "A" character
{PREPEND "G92 E0\n"} - prepends the specified text at the very beginning of the gcode file, note that the \n is converted into a true newline character, not two separate "\" and "n" characters
{APPEND "G28 X0 Y0\n"} - appends the specified text to the very end of the gcode file
{DELETE "M82\n"} - deletes every occurrence of the specified text from the gcode file, note that it will not automatically delete a line if it is suddenly empty after the deletion, so that is why you might want to include the \n at the end (so that the empty line is also removed)
{STRIP ";"} - completely deletes every line in the gcode file that begins with the specified text
{TOOL0REPLACE "E" "A"} and {TOOL1REPLACE "E" "B"} - these special TOOL#REPLACE commands will do a search and replace, very similar to the {REPLACE} command, however, the replace only occurs if the specified tool is active. For example, when using TOOL1REPLACE, the replacement will only occur if tool 1 was currently active at that line of the gcode file
Last edited by S3D-Jake on Mon Jul 23, 2018 11:37 am, edited 1 time in total.
Reason: current_Z_position updated to current_position_z

Hello, my goal is to mix color.
My idea is to change the tool at every layer.
By this way, when your are not to close of the printerd object , it's seems colors mixed from the 2 colors.

Layer change g-code tab is onbly able to add a line between previous and current Z position.
so i managed to do my effect like this :

In the layer change g-code tab i put this code
[previous_Z_position]
T1
[current_Z_position]
then, in a text editor ( windows notpad ) i'm searching all the T1 ( at layer change ) and replace T1 by T0 one time in 2.
It's a big job to do it by hand in notpad when you have a lot of layers .

did you know a text editor wich beeing able to automate a replace one time in two ?
Because it's works ! One layer on two are differents colors !

thanks for your help

This is an awesome post! I did have a couple questions though:

The reason for doing this is to have different temperatures at different layers that are controlled by the temperature tab in the settings... It didnt seem to work for me when i tried it so i was curious if there is another way to reference the temperature/layer tables defined?

Also, there seems to be a slight pause when switching tools prior to the move "G1" code in the tool change script. is there a way to minimize this/eliminate this? Normally its not so bad but if you have a small feature you are trying to print the dwell tends to screw up the finish.

thanks for the input. Hopefully someone figured this out already.

I want post too the LCD "(current layer) of (layers)" on every layer change, is that possible?

This really should be a new topic.

Great post but he never asked about time measurement. The single biggest reason to display the layer height on the LCD screen is in the case of failed print so you know where to resume by LAYER #. Yes, you could do it by z height too, but visually seeing the layer number is easier to remember and find in the gCode file that S3D creates. S3D inserts the layer# and z height in the gcode for every layer printed but it puts inserts them as comments.

After reading the post, I was really intrigued by the terminal post processing window and was able to display both the layer # and the Z height on the LCD screen during the print for every layer printed. See attached pictures.

Place the following code in the post processing window and you will get layer number printed on your LCD screen along with the z height. The replace command simply removes the comment and replaces it with the M117 command. The second line is for formatting only it is not needed but tightens things up. 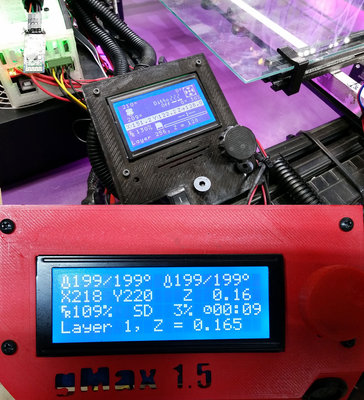 Can I do calculation, like something like this to raise the nozzle 10mm at the end of a print?

nka wrote:Can I do calculation, like something like this to raise the nozzle 10mm at the end of a print?


Just use relative mode. See below.