by jimc
thanks dale, i will definately give the g2/g3 a try and let you know what i find out. i only played with the one roll of pla that came with my m2. it was far easier to print with than abs. not that abs is really bad to print with, its just different. the pla just doesnt work for me because it distorts with warm temps. the differences in your coast and retract settings compared to mine can all be due to the different materials. when you goto try abs here are a couple things i found.... all the tricks to keep the parts bonded to the bed dont work except one. kapton with the abs juice works fantastic. i tried hairspray and many other things and none of them did a darn thing. if you need a jumpstart on it i am more than willing to post my fff file.

by jimc
dale, i turned on the g2/g3 and tried it out. i really didnt notice any difference in the output. it already was really smooth so i dont think it could get any better and it didnt get worse. any flaws i have at thins point in my print are only where the extruder starts and stops. its really small but you can see where it happens and still leaves a spec in the print surface. with random start off it list leaves a tiny line. not too bad and nothing to complain about.

i downloaded the torture test to give it a shot. first try the thing printed out perfectly except the arch. i did it in abs. the 9 cylinders came out flawless. the arch mad it to dead center on top then the little piece attached to the bed got knocked off.

Exactly. I think until 1.1.6 comes out (Clayton says they fixed the layer-to-layer z-index-then-fast-move sequence), I'll probably have that problem unless I define manual supports. When I use auto support generation, the supports are too far from the small end of the arch to prevent it from being knocked over before reaching the support. But auto supoort does NICELY support the platform that hangs in space near the OTHER end of the arch.

I'm sure with the arcs, it's just something I have set wrong somewhere else that doesn't come into play when I use G2/G3. But it's nice to know that with the FFF I'm using now I can get nice rounded corners on my next project without them being jagged. Can't wait for the "reference manual" that goes over the settings in detail. I really want to know what I messed up so badly.

Even further off-topic: we'd been talking about lighting for the M2 ---- go check out my latest post on the MG Google Group! But you'd better wear sunglasses!
Dale

by jimc
When i did the torture test i didnt use any support. I figured when they did the actual test they would not have used support to see how the printer handled that. If i use support i might be able to get it done. The one part of the arch didnt get knocked off until almost reaching the center point. Hmmm maybe ill try again. Btw i saw your lights and they look fantastic!!

Thanks guys. I've been watching this thread and have made some of your suggested changes. The .88 multiplier and 2.8 coast produced some flawless parts in white abs. I did however turn on arc detection and ran some black abs parts. Still got the random "nubbies", even with random start turned off. I'll try that same part again with arc detection turned off and see what I get. Also, I'll run it in white to just to see if that makes a difference.

I also wanted to chime in on abs printing. THE ONLY way that I have been able to print with abs is with Kapton tape and abs juice. I actually find it challenging sometimes to get parts to un-adhere from the bed!

My latest juice mix is approximately 2 grams cut up abs to 4 oz of acetone. Printing at 190c for extruder and 90c for heated bed. I also put a large cardboard box around the printer to keep drafts away from the part.

by jimc
dave i'm with you, kapton and abs glue is the only thing that works for me too. 190 is a bit low for abs, or was that temp for pla? so far with makergear and reprapper abs i have found 225-230 to be the sweetspot. i have some from makergeeks that really needs to be run way hotter for good interlayer adhesion. my bed is set to 96.

on another note, here are some pictures of that part i was printing. i had to do 14 of them plus 14 of the mounting brackets. these are the led post lights for my deck. i put them in my spray booth today, primed, sanded them smooth then did a dark bronze finish on them.the mounting bracket get screwed to the post and holds the led bar then the front cover snaps on. 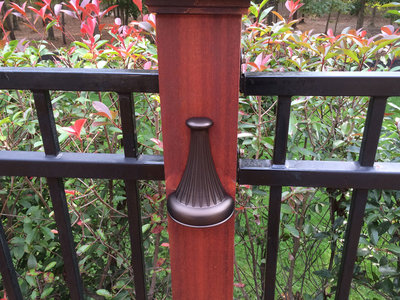 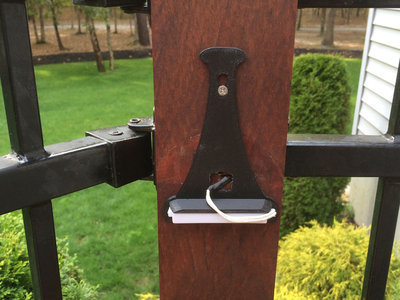 by Chemicalcorrosion
Jimc,
Your parts look great! Yes, I have been printing abs at 190c. I know that sounds low, but I have been getting really good layer adhesion. I am going to slowly raise the temp and see how the results vary. I'm a little leary on setting it at 220. The last time I did that, I burned out a MG hot end.

I have purchased a "MG Plus " heater block with the 40 watt cartridge heater from eBay. I would like to find out more info on hooking that up to my M2(ie do I need to make any firm ware changes or can I wire it directly into the rambo boards current hot end connection.)

Your parts look great, I must say!

It really looks like you've managed to find proper settings for getting the blob bug out of the system!

I'm still struggling myself, printing a part now that is all arcs as well, but I still get the small blobs.

I've also noted that some fine details gets lost in the Creator slicing, that is still there with slic3r.
I stopped slicing with Creator for a while, and handled all that with slic3r, but I like the faster speed with Creator and the luxury of having it all done in one program!

Any chance of you posting the FFF file you made to have a look at and see if it takes me further?

In any other case, I'd be happy to post what I have, for suggestions

by jimc
thanks. i havent gotten the blob thing corrected 100%. they are still there but now they are super small and contained to one area. i might try messing with the coasting some more to see what happens. here is my fff file for you or anyone else that wants to use it. in this file i have the g2/g3 turned on. you can mess around with the detect circular segments a bit and turn that on or off. i have had luck both ways. oh i just looked at the file and the multiplier is at 94. i brought that back down to 90. 88-90 was working nicely.

by askernas
Thank you for sharing.

In the preview of the Creator software, I still see the anomalies, but not as small blobs, rather longer small streaks. Unsure if they are actually smaller, but I suppose a test print is the best way to find out

Thanks, will keep you posted on the progress.

I modified the temperatures on the file as I print with PLA currently, but PLA or ABS, the anomalies still show up after slicing