Prelude:
The creatbot can be a fantastic printer, however it is let down by the profiles. It has a maximum resolution of 0.04mm however the simplify profiles only go to 0.1mm. The following information will help others get the best from the printer and hopefully help me improve mine. For $250 AUD, I would expect snappier response from S3D support

The problems - inherent machine and the easy fix
Lets face it the printer is a Ultimaker clone. Now we can admit that lets treat it like one and fix it. I will copy the thread I made in 3D hubs and expand here.
Original thread on 3D Hubs

As before, these steps need to be done ASAP or you are just wasting your time. Like the two weeks I have just wasted before writing this. I want to thank Mark Langlais who quite literally lives on the other side of the world to me, and who helped me get mine printing effectivly.

Here are the defaults and the rough fix numbers

Nightrams defaults (aka what it should be from factory):

Basic Extrusion calibrate and so forth
Start at the extruder then work your way around. I disconnected the hose at the top of the bowden, fed in some filament and chopped it off exactly 120mm from the bottom of extruder. Becasue lets face it you wont re-use it (or you will as slurry). Use the controls and feed 100mm of filament through, measure the distance remaining. It should be 20mm, if not its maths time!

Put the setting in and do another filament draw. I bet your bottom dollar it is better. Keep this process in mind and you are armed with the knowledge to calibrate X/Y/Z, although I found X and Y to be close enough.

Here is a video of the process (not mine)Youtube clip


How do I stop the acceleration greater than a jet plane?
Someone in the company thought it would be a good idea to have the accelerations maxed out, Quite literally faster than a supersonic jet plane. To fix this you need a program called matter control. It is one of the few programs that can adjust the firmware in the printer without destroying it.

Put the settings in as such: 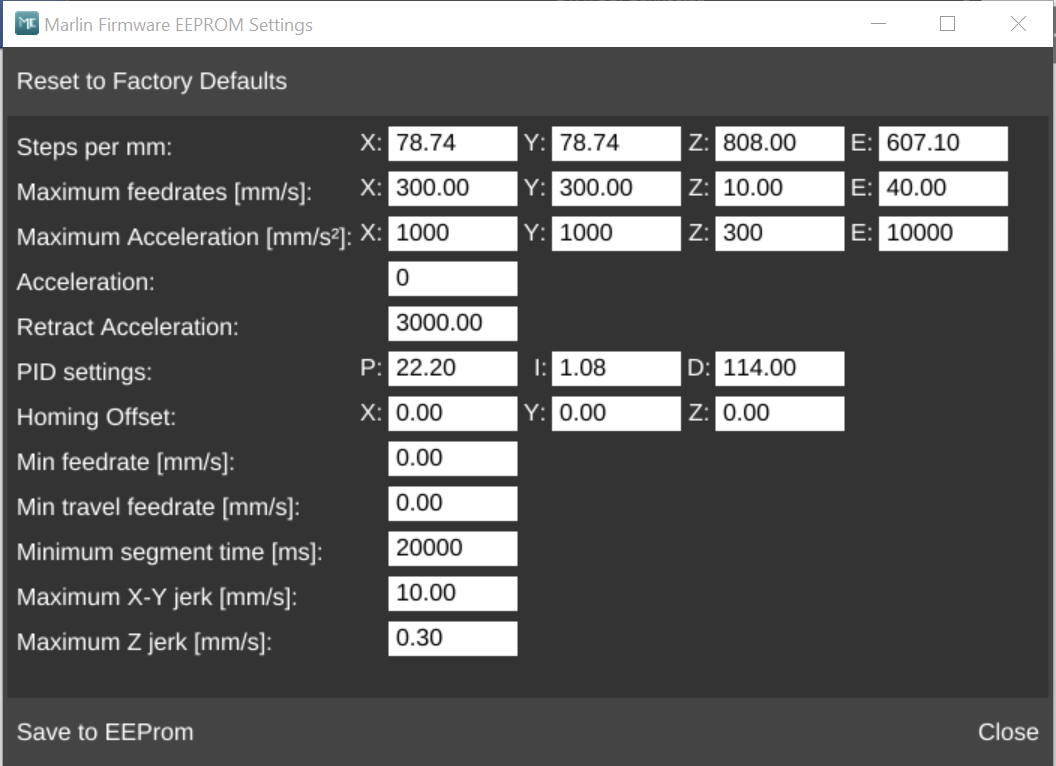 Lastly, the plug. What software to use?
You probably have realised it by now that the Creatware is just a sucky version of Cura.even then it is second best to Simplify3D. You have saved a few pennies on the printer so I urge you to buy the software. Here is a basic FFF file for the Creatbot DX03. With the settings within I have been able to reliably get down to 0.04mm successfully. Just lower the speed to 1800mm/m.
Nightrams FFF file


Software tweeks
I like the start and end code in Creatware, so here is my modified version for you to add.


Hardware fixes
This area is not as large but should be noted. Some things can be software compensated for and others not so.
*** Updates to come ***

I want to change te settings:

But I dont't know how to do it.
I can change te Extruder to 607.1 s/mm in the setting -> motion on my Creatbot DX 3.0 triple extruder.
But don't know how to change the rest.
Would love it if someone could help me...

You have to edit the EEPROM settings. You can do it by manually sending commands in the Machine Control Panel. This lists what commands to use: http://reprap.org/wiki/G-code

hello can you repost the fff profile

Any chance anyone has figured out how to disable the auto-shutoff "feature"? I can't express how frustrating it is to start a print with octoprint and have shut off because the screen has not been touched in 5 minutes.