Now I might be pushing the boundaries of fff printing here.......but I thought I'd share a photo of a couple of models I have in prototype stage at the moment: 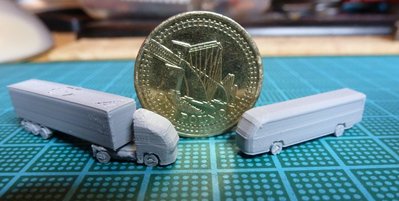 The size is self-explanatory. These models are printed in PLA with a 0.2 mm nozzle with layer thickness of 0.05mm. The coach was printed in 5 parts and the artic in 12 pieces.

Is there anyone else here who is printing such small models who I can exchange ideas/advice, etc??

btw The coin shows the Forth Rail Bridge....which I'm in the process of creating a model of in 1:450th scale, the scale of the above two models.
Doug Kightley
Volunteer at the National Tramway Museum http://www.tramway.co.uk
Railway modeller and webmaster at http://www.talkingtgauge.net

I don't print small models but I do use a 0.2mm nozzle. this is to get the detail I need for some of my parts.

my printer can't get the 0.05mm resolution. which is something I wouldn't mind getting.

what printer do you use?

what printer do you use?

I use a Makerbot Replicator 2, which I've had since early 2013....which so far must have clocked up well over 2000 hours printing.
Doug Kightley
Volunteer at the National Tramway Museum http://www.tramway.co.uk
Railway modeller and webmaster at http://www.talkingtgauge.net

Cool prints. They'd really stand out if you paint them

Did your printer come with 0.2 mm nozzles?

If not, what size were the originals?

The standard nozzle was 0.4 mm.

I've only been using 0.2 mm nozzles for a couple of months as the parts I'd been printing up until then were okay using the standard 0.4 mm nozzle. I was starting to get to some smaller parts (of the Forth Rail Bridge) that had vertical parts that were less than 0.4 mm wide.

I was worried about translating settings from a profile with a 0.4 mm nozzle to one using a 0.2 mm nozzle.....but actually very little adjustments were needed. Since I've downsized the nozzle, I've been waiting for the opportunity to try some small prints.....and took the plunge in the last day! And so far, I'm pleasantly surprised....
Doug Kightley
Volunteer at the National Tramway Museum http://www.tramway.co.uk
Railway modeller and webmaster at http://www.talkingtgauge.net

I've been busy expanding on the range.....

dkightley wrote:These models are printed in PLA with a 0.2 mm nozzle with layer thickness of 0.05mm.

Just curious where you got a 0.2 nozzle for your rep2. Also is it mostly a stock machine are do you have some of the various available upgrades?

Regarding upgrades, the most important one I've done is the extruder upgrade. The silly plunger backed by an o ring was never going to give consistent results. Other than that, I've upgraded the firmware to Sailfish v7.5, and I now always use PTFE lined barrels in the extruder.....they really help with retractions. I also use a Buildtak sheet on the standard acrylic build plate.

Both the barrels and Buildtak sheet do tend to have a life expectancy shorter than what you might expect, but they're not worth being without!

In just under three years....and at least a couple of thousand printing hours, I've had to replace the thermocouple once, the hot end insulation three or four times, and have had to change nozzles probably around 10 times. I've also had to replace the hot-end cooling fan twice...once because I accidentally put a screwdriver into the blades and broke a couple off, and the other time because a wire came off the other cooling fan, causing the whole extruder to overheat and the plastic casing melted!

I've recently acquired a second-hand but totally unused Replicator 2 to supplement by existing machine, and I'm in the process of upgrading that to the same level of enhancement. The only difference I'll probably end up with is one with a 0.2mm nozzle, and the other with a 0.4mm nozzle.
Doug Kightley
Volunteer at the National Tramway Museum http://www.tramway.co.uk
Railway modeller and webmaster at http://www.talkingtgauge.net

I'm using a makerbot clone with an all metal hotend (micro-swiss), modified cooling and a .2mm nozzle for detailed work.

If you are looking for a more lasting print bed solution, i use a sheet of PEI. It's difficult to get , i got it from amazon, but works perfect. I use it for about 6 months now and my printer is running non-stop, but no sign of wear. The hull parts (PLA or ABS) stick like glue with the right temperature and come off easy when the bed cools to about 30-40 degrees.

I have trouble finding a good filament (PLA or ABS) with a consistent diameter. What do you use?

Here you can find some examples of my work https://drive.google.com/open?id=0B5bku ... jAwdzdDTEU.
Post Reply
11 posts