by swmand4
I'm printing some parts on my Flashforge Creator Pro 2016 and keep seeing this weird banding issue around any walls that have holes in them. It also seems to happen when the outline of an object changes, where detail either sticks out further or cuts inward. It only lasts from the bottom of the hole to the top, and stretches almost all the way around the part. Photos attached. This is not the only part this happens on, any with a change in outline with respect to Z axis result in this defect.

Other details:
Filament is Hatchbox PLA
Glass bed heated to 60C with hairspray applied (but was still present when using the stock tape that came with the printer)
Micro Swiss hardened nozzle (not all metal hotend, the version for PTFE tubing)
Simplify3D (obviously)
Printer is located in my garage (but defect is still present when printer is in my house)
Printing at 0.2mm layer height
0.4mm nozzle with 0.4mm extrusion width set
Side cooling fan is set to turn on at layer 3
I took a look at the Gcode output in an online viewer and it looks to be doing what it is supposed to

Nothing seems to reduce or eliminate the defect. Any help is greatly appreciated.

by JasonA
I have a FFCP (same year/make) and I have LOTS of post on this forum regarding the same thing or very similar. I came from the old "woody" FF and another self built printer and had no issues but when I bought my FFCP I had nothing but banding and weird lines and other issues!

I posted here and also on the FF Google forum and had tons of good suggestions but the problem ended up being loose and poorly built X/Y molded rod holders for the gantry. There was a small amount of slop in the molded black pieces that the chrome rods go into that hold the main head assy and that slop was causing the issue!

But before I found this out, I changed out TONS of stuff, bought 10ft of GT2 belt from Amazon, bought new NEMA 17 steppers, bought new drivers for the main board, swapped out the main board from a buddy's FFCP (after I convinced him).. bought a new Z stepper with the rod (because the Google group said it was prob slightly bent- another $99)... tore the whole machine apart and rebuilt it top to bottom and used locktite... still had the issue.

In the end it was the rails, and there was just enough slop to cause issues. I ended up using 30min epoxy and put everything nice and tight! It's never coming apart or loose and I get amazing prints close to my Mark Forge because everything is rock solid!

One thing to note, if you're using USB, do a test print using the card first! some of the boards had a bad interface and you could be getting lag.

by swmand4
Thank you, JasonA, for your reply. In all my Google searching I couldn't turn up a single instance of someone else with this issue. Good to know I'm not the only one.

I have only ever printed from SD card, never from USB, because of the lag issue, potential interruptions, and the fact that my computer is in a different room.

I did a test print in ABS using the right nozzle (as opposed to PLA from the left) and saw that the defect was still there, but less pronounced. I have also tried other slicers and see the problem to some degree or another so I think it's a good bet the issue is mechanical.

Whatever detail you can provide would be great! Photos, descriptions, etc. I think I understand the general concept of what you're saying, but maybe not the finer details... I'll also see what I can turn up now that I have a new slop/variance clue to follow.

by JasonA
Here's some of my posts.... and please take time to read thoroughly through some of them. There's some great info in there! It took me many months to figure this out!!

One thing to note!! The FFCP can be made or shipped with the gantry out of square or like a parallelogram (aka not square to the frame).. pull it close to the front and see if the rails look square to the top (just eyeball it- you can tell right away!) If it's off or not sqaure grab each side and push/pull and you'll make the belts jump a tooth until you square it up. That can cause big issues if you're not square.

Also check the back stepper driving the tension with the short belt--- HAS TO BE NICE AND TIGHT!!--

Here are my posts.. and some vids..

by swmand4
JasonA - I've read through the material you posted and I think we have different issues. I only have quality problems around certain details - it's actually predictable where the banding will occur (anywhere there is a hole or recessed area in the outline). The rest of the print is very good looking, with the exception of some very minor Z wobble. If I remove the holes from the model, the problem goes away (but then I don't have the holes).

In addition to what I listed before, I have done the following:
After these items, I have managed to reduce the problem but not completely fix it. If it would help, I could post the Factory file here.

A random thought as I was about to press submit: I noticed an issue with the cooling fan shutting off during process changes for a different part. This issue was causing banding at the process change height, and it went away once I corrected the fan issue. Note the model in question here uses a single process. However, I wonder if, due to the model geometry, the model itself is blocking the cooling fan when printing on that side (fan blows mostly on the plastic infill, not on the side.) This might explain why the defect is most prominent on the right side and fades as it follows the cylinder. It would not, however, explain why the defect can sometimes be seen on the other side. I suppose I could try rotating the model 180 degrees, print again, and see if the defect moves to the other side...

Attached is another example of the issue on a couple other parts. Notice the areas circled in red - the effect is present only at heights where there are holes in the wall. And some effect in the area in blue, though not as bad as on the part in previous posts. In fact, the other side of the blue area is raised instead of recessed, almost like a layer shift but only at the heights where the details are. Everything returns to normal once getting past the holes/recesses.

Any ideas, anyone at all?

by horst.w
I think, it is not a problem of your printer, I have the same occurrence with my Mankati Full XT.

I can not avoid it but minimize when reducing the speed. But the band seems than like an area what is more compressed and more glossing than the rest of the object.
At the moment I print a lot of small objects with reduced acceleration and only 40 mm/s in a really pretty quality and no bands at all. The edges are all accurate and knife-sharp. Maybe I have changed from a 0.40 nozzle to a 0.30 nozzle, perhaps the problem is caused by the (old) nozzle.


Attached a picture of my test- bloc for bridging and hole; in the worst case, a band ist as large as the hole wide. Theoretically the bridge has similiar conditions as the hole, but I have never seen a band there! 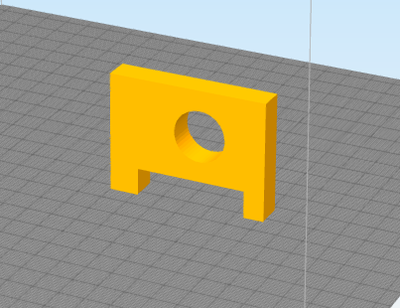 by swmand4
Backing off the speed never seemed to reduce the problem for me. The only thing that helped was switching to a different filament brand. I almost exclusively use MakerGeeks PLA now. Barely, if ever, see this problem anymore. Maybe it's the higher temps their PLA prints at, or maybe I tweaked some other setting. At this point I may never know.
All times are UTC-04:00
Page 1 of 1
Powered by phpBB® Forum Software © phpBB Limited
https://www.phpbb.com/