Which Will Rule? Upper Vertical Separation vs. Horizontal Offset

Which Will Rule? Upper Vertical Separation vs. Horizontal Offset

I had originally posed this question here viewtopic.php?f=8&t=2135&p=40939#p40939 under Tip of the Day, Support Analysis, but after not receiving any responses, I thought it might be better to create a new topic.

I've had this question nagging at me for a while: Which has higher priority, the Upper Vertical Separator or the Horizontal Offset from Part? See my diagram:

When the part has a curved bottom, will the Upper Vertical Separation Layer (UVSL) supercede the Horizontal Offset (HO), or is it the other way around? If the Horizontal Offset is given the higher priority, then the vertical distance between the object and supports is almost doubled at the steeper parts of the object (if the horizontal offset is set a recommended parameters).

I would expect the S3D Devs to give the UVSL the greater priority over the HO, but I recently had a print where I had a large HO (about 1.5mm) and the supports were nowhere close to touching the bottom of the object at the steeper inclines.

Yes, when the part has an incline high enough, it will no longer need supports. But if the HO is increased for easier part separation (esp. for materials that are stringy), it can affect contact for even the less inclined points of the part's base.

Re: Which Will Rule? Upper Vertical Separation vs. Horizontal Offset

It's been my understanding that both are used in every situation. If you're printing an area that get's solid bottom layers it will use the upper separation layers and the horizontal offset if there is part below the supported area that will interfere with a support pillar's area.

This mesh ball is a good example. I manually placed supports filling up one of the holes in the ball. The pillars I placed left no area untouched between the top of that holed section and the bottom of the holed section. The software realizes where the pillars overlap with the part and create a horizontal offset from that section of the part. The software also notices where the pillar meets the top and bottom areas of the part and then either starts or stops the pillar the specified number of layers after the top of a part or before the bottom of a part. 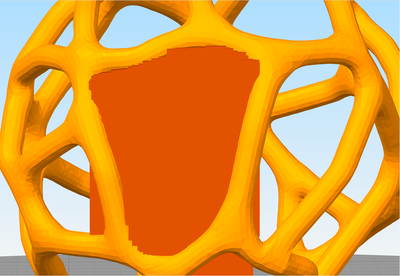 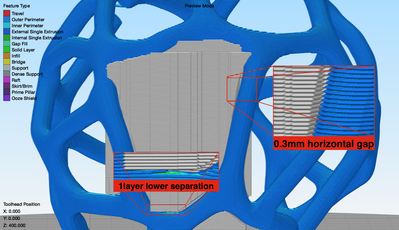 Re: Which Will Rule? Upper Vertical Separation vs. Horizontal Offset

This is my understanding also........
Doug Kightley
Volunteer at the National Tramway Museum http://www.tramway.co.uk
Railway modeller and webmaster at http://www.talkingtgauge.net
Post Reply
3 posts • Page 1 of 1