I'm experiencing an issue that I didn't find directly addressed in the troubleshooting documentation. I'm getting pitting in layers when printing using PETG. Is this likely an over- or under-extrusion issue? What else might cause this? It happens over a large temperature range. The filament is fresh out of the vacuum package (within a couple of weeks). 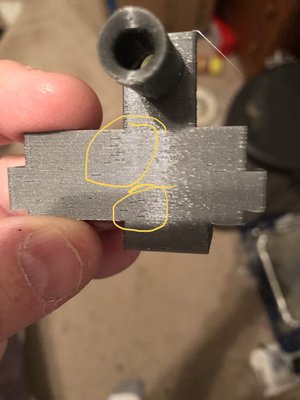 What printer, slicer, temps and what print speed? What brand PETG?

Nothing obvious there. How about speed?

Are you able to watch it extrude to see what happens at that point where it skips?

One of my printers started to have a lot of what looked like under extrusion at times and after sitting for quite some time watching it and watching the hobbed gear I found that it was acting like it was trying to retract where it should not have been. Turned out that one of the stepper wires had formed a partial break that was causing mixed signals to the motor.

Anyway, the point is it may reveal something to you.

Have you measured the filament diameter over a long length to see how uniform it is? maybe the filament isn't feeding good.

I am going to say though with it being ABS that moisture is most likely the culprit. Try drying the filament and see if it improves.

wirlybird wrote: ↑
Wed Jun 06, 2018 11:57 am
I am going to say though with it being ABS that moisture is most likely the culprit. Try drying the filament and see if it improves.

It's not ABS. The "R" in "ABS-R" stands for "replacement". It's predominantly PETG.

Underextrusion is the likely cause. I saw a significant improvement just going to 105%. It’s not perfect, so I’ll probably go to 110% on the next print.

I printed an object last night at a 110% extrusion factor and had zero pits in the surface. It wasn’t a particularly tall object (45 layers at 0.2mm/layer), so I’m not willing to call the issue 100% resolved just yet, but I'm encouraged.

arti has made, to me, a very valid suggestion that has....so far...fallen on deaf ears!!!

An extrusion multiplier of 110% is also shouting at me as being wrong!

And a third point from me....the picture ion the first post indicates that arti is right to suggest coasting...….

What I see from the photo is that on the perimeter extrusion, the extrusion is okay apart from either the very beginning of the extrusion, or the very end of the extrusion. There is nowhere else visible on that single photo where there appears to be a deficiency in the amount of plastic. This says to me that the extrusion multiplier (as was when the print was done) is not that far off optimum....and that there is an issue with the ooze control settings.

You will need to revert to these previous settings and reprint the part....and observe what is happening. Is the "gap" in printing happening at the start or the end of the extrusion path around the perimeter???

If the gap is at the end of the extrusion, then your coasting needs to be reduced. Coasting is where the extrusion is stopped to allow the extruder pressure to die down. If coasting is off, then you do have an issue with extrusion....and I suggest upping temperature a little and calibrating your extruder feed and checking filament diameter. A multiplier value of 110% doesn't sound right!
Doug Kightley
Volunteer at the National Tramway Museum http://www.tramway.co.uk
Railway modeller and webmaster at http://www.talkingtgauge.net
Post Reply
19 posts