corry wrote:Yes, it positions the *TOOL* *EXACTLY* where the model defines it. Plastic comes out *BOTH* sides of the nozzle. Place a 3mm hole in an object at 0,0. Note the min/max x/y are at 1.5 and -1.5. With an extrusion width of 0.48 holes will now be a maximum of 2.42mm. Add in the arc issue and it's less. Add in a bit of plastic shrinkage it's less. By for though the largest contributing factor is the extrusion width! Seriously, it's not rocket science and needs fixing!

That is not correct at all. Go look at the gcode that is produced. The toolpaths are NOT positioned directly on the edges of the model. If they were, everyone's parts would always be one extrusion larger than intended (i.e. around 0.5mm larger). And I guarantee you this is not the case. There are many people here, including myself who routinely print parts within 0.01mm tolerances.

You need to look more closely at the toolpaths. They are automatically offset away from the edges of your STL file so that only the very outer side of the extrusion lines up with the edges of your model. It works exactly how it should.

If you are seeing the holes end up smaller then they should be, then it's either because of your STL file tolerance or over-extrusion. The software is placing toolpaths exactly where it should based on the model you give it and will extrude exactly as much as you tell it to.

If you still disagree, why don't you post a factory file that includes a simple model with a simple hole that you feel is being sliced "incorrectly". I'll be happy to walk you through it.

Hopefully a test I've just done will answer the question as to whether there is a bug or not.

I created a shape 10mm x 10mm x 5mm and put a 5mm hole through it. I imported it into S3D and cloned it twice, then aligned the three on top of each other. The bottom piece has a profile with a 0.2mm extrusion width, the middle with 0.4mm, and the top one with 0.6mm.

Here is a screenshot of the preview...which I hope all will agree shows exactly what the slicer has written into the GCode: 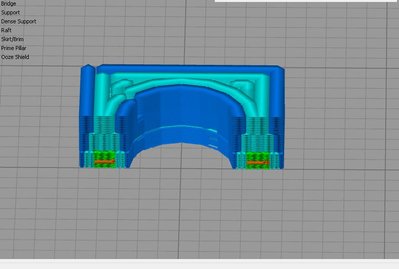 So, any undersizing of the hole is down to over-extrusion.....and not a bug in the software.

I've attached the factory file so anyone can take a closer look.....

I have the same issue. My outside dimensions are very close but the inner hole diameters are always about .5mm too small. I have tried changing extrusion amounts until the point of layer separation and still have an issue. I understand the octagonal hole issue with low detail stl files but it shouldn't be off on large hole as well as small holes right? I have to oversize all the holes and if I want it exact I have to use a reamer.

A lot of people have this issue and needs to be addressed IMO.

I am using another slicer for mechanical parts while simplify3d wont hear us.

To help the developers resolve the "issue", they need to be provided with evidence of what the software is doing wrong...so someone will need to create an example of where a hole is being "sliced" where the path of the extrusion round the inside of the hole is in the wrong place.

Unfortunately...the test I have carried out and documented in my previous post shows that the slicer is doing exactly as it should be doing...and there does not appear to be a software issue. Any undersize in the hole in the printed object would be caused by too much filament being extruded...and not the filament being extruded in the wrong place.

One thought....perhaps the software is extruding too much filament. But then it would be doing so elsewhere, causing dimensional issues in other locations. carrying this train of thought further, could the fact that as the path is running round a tight curve, then there's too much plastic extruded around the "inside" edge of the curve and too little being extruded round the outside...resulting in the formed hole being a tiny bit smaller.

So...what can be done to identify exactly what the issue is? Any suggestions? Perhaps a test print with a series of differing size holes...and the hole sizes being checked accurately with drills, etc. a 0.05 mm undersize in a 1mm hole is a bigger problem than a 0.04 mm undersize in a 10 mm hole. ( and before someone says I've specified differing errors...a 1 mm diameter curve is tighter than a 10 mm diameter curve, and my guess at the amount of over extrusion around the inside would be different).

Perhaps the solution would be an inversely proportionate easing of the internal curve diameter to compensate for the bias in extrusion round a curve. More than a simple "It's a bug. Fix it!" very much like the reported issue with raft separation....fluid engineering meets mechanical engineering meets software engineering!
Doug Kightley
Volunteer at the National Tramway Museum http://www.tramway.co.uk
Railway modeller and webmaster at http://www.talkingtgauge.net

Your "test" is a graphical depiction?! That's not a test. Are you an engineer? Wow.

I will generate a test case sometime when j have time. Until then instead of the standard model oversizing holes by .2-.3 like everything you get on thingiverse, I have to make my own models and oversize by .8. I'll be moving soon, so I do t have a lot of time to mess around with an obvious test case. Literally all I did was go into openscad, create a 10x10x3 cube, cut a hole out of the center of it that was 3mm. Slice, print, measure hole, look at GCode. The outside edges were compensated for, along the inside of the model. Inside edges whether they were square, round, hexagonal, or whatever, we're all placing the nozzle on the line of the inside hole looking at the *ACCURATE* g-code not a graphical depiction. That's it. I took the maxx, maxy, minx, miny of the innermost perimeter, found it to be exactly 3mm apart, rather than the expected behavior of 3.48 when extrusion width is .48mm. It's that simple, anyone can do it. I've checked a few times, my software says up to date. Perhaps this is a recent occupancy and you've got an older version?

You know, I'm just sitting here printing something, so I figured what the heck, I'll triple check. It's worse than I thought. 3mm hole, innermost perimeter (listed as outer perimeter which may have something to do with it) min x 102.732, max x is 105.287. A difference of.....2.555 for a 3mm hole! This is awful! Min y was 93.211 max y was 95.787 a difference of 2.576! No, this is incorrect behavior. It's not plastic shrink, it's not the extrusion along an arc, it's an honest to goodness bad behavior. Those other effects exist, but when you slice something that everyone else on thingiverse doesn't have an issue with and all your holes are too small, it's *PRETTY* obvious there's an issue.

Again, do the math. It's not hard to confirm the behavior. We're talking third grade arithmetic. Repetier host will highlight the currently selected codes path in its preview making it easy to determine when you have the innermost perimeter. All trivial to prove.

Just saved up and bought S3D in December. Did some initial test prints and things were great. Better than Cura by far in almost every way.

I bought it to help with my MPCNC build. Printed a ton of parts and to my shock, all the interior holes are too small by .5mm. I have spent so many hours reaming out holes.

So I am a good bit disappointed by this. I have a bunch of friends that are building the same and were also going to buy S3D but they aren't now until that issue is fixed.

if it were easy to modify STLs it wouldn't be as bad...

I confirm that holes are printing with approximate 0.5mm undersize diameter to the specified in G-code and it is a big problem.
External dimensions correspond to those indicated in the G-code.
I believe that we need a special mechanism for the calculation of compensation runaway internal dimensions.
I think it might be a special table correction coefficients measured for various diameters with interpolation for specific value.

For me, the only way to solve this problem is that I print a set of holes and measure their diameter by drills. For each size I calculate the amount of correction and change in the diameter of the original model.
But this method is suitable only for round holes. What to do with complex perimeters, I do not know.

I hope that the compensation algorithm will implemented in Simplify3D.

Are there more ideas out there?
P.S. Sorry for my English. Greetings from Russia!

As has been discussed many times in this thread, Simplify3D is doing exactly what it should be. It's printing the perimeters exactly where is should based on the STL file that you give it and your defined extrusion sizing. That's been verified several times now.

Unfortunately, the way STL files are generated is not ideal for small holes. If you don't use a fine enough resolution, you are guaranteed to create holes that are much smaller than intended. Just imagine trading a octagon that fits inside of a circle. Or if you were using a lower STL resolution, it would be a hexagon inside of the circle, etc. So it's very possible that you have a poorly exported STL file that is going to cause this problem.

In addition, if you are over-extruding at all, it's also going to become very obvious as you print small holes. So it's very important to adjust your extrusion settings to get things perfectly dialed in.

Finally, there's also the "Horizontal size compensation" option on the Other tab that you can use. I've used that before to widen up all of my holes. For example, if you set the value to -0.1mm, it moves the perimeters of your holes outward, which makes the hole 0.2mm wider (x2 since both sides move outward).
Locked
53 posts