I am trying to print some rc autogyro blades end on, on an ender 3. Its basically a small airfoil. I have to keep the weight right down, so I'm printing with a single layer shell and 5% infill (full honeycomb). I found that by moving the part around on the bed, I could optimise the position of the infill in the airfoil.
It was a bit of a pain, but if it had to be done.............. and made te part much stronger!!!

I cannot find any way of controlling the position of the infill in Simplify3d, although I note that Cura has an Infill X and Y offset.

by horst.w
The infill is part of the print and is only related to the form of the model and bounded to the perimeters .

You can have influence to the overlap and - importend - to the angle of the print.
And this angle is not related to the model but to the X an Y axises. to turn the infill inside the model it needs to change the print angle.
I use mostly Grid with 45° and -45°.


If you want to print 2 or more models in one print, than add for each one a own process where you can determine the infill print angle separately.

attached picture, the 2nd object is turned for some degrees to demonstrate the direction of the infill stay stabile 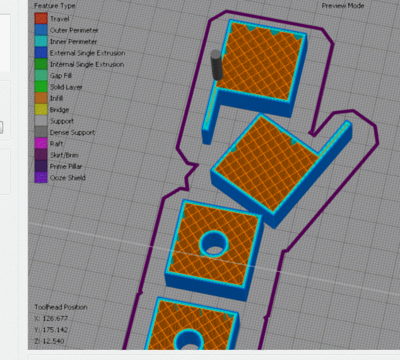 by ibsmith04
Thanks for your reply.

First image shows an airfoil, which I have positioned on the grid (x153, y52), sliced using 5% infill full honeycomb. This position gives me a niclely positioned infill which will strengthen the print with very little weight overhead.

In the second image I have added a duplicate airfoil at position (x153, y70), still sliced using 5% infill full honeycomb.

Notice that the infill in the bottom airfoil (which is the one at x153, y52 ie the original, has now changed.
The only difference is that a new object (a duplicate airfoil) has been added to the grid

What I would like to do, is print several airfoils at a time, all with the infill pattern shown in the first image.
First step would be to understand how the infill is positoned.

I have not seen this to be the case. If you move a model, the perimeter shifts, but the infill shifts differently. See below. 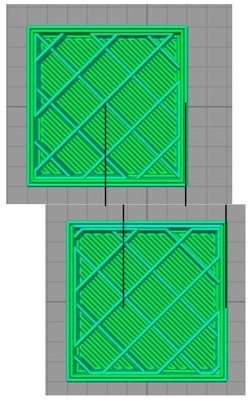 I'd prefer to be able to control this.


Therefore add separate processes to each of the models. At the moment it is the only one solution to manipulate the infill of them.
As your pictures have shown it, the infill is related to the generel direction of the X and Y axes for all objects over the whole print table. Turning or shifting an object may help but it didn't change the general direction of the infill.
The posibility to manipulate the print direction of infill as an optical view element (i.e. spoke wheel) is only to realise with segments and adding an own process to each of them. That was new in version 4.0 (?).
The segments must be created in the CAD drawing or splitting the STL into several parts each one as an alone standing STL.


I have not seen this to be the case. If you move a model, the perimeter shifts, but the infill shifts differently. See below.

You are wrong.
You have only 2 Perimeters and the diagonal lines are part of the infill and not perimeters!
Check it : Print preview >>> Coloring >>> Feature Type

The perimeters themself are not varied, Only the object is shifted while the infill is steady like a grid or table cloth laying over the print table.

I have achieved what I set i set out to. ie 6 airfoils on one bed with exactly the same infill.

With 5% Full honeycomb I noticed that the honeycomb grid measured 18mm between parallel sides, so varying the y position by 18mm should give me a chance of obtaining the same infill pattern. 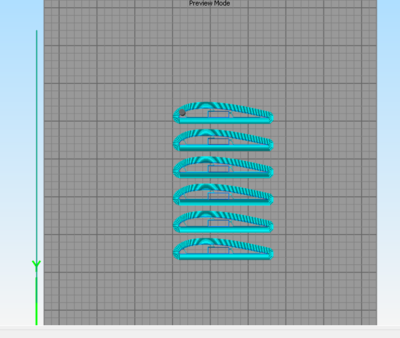 I then found that by adding a small body to the top left of the bed, I could control the position of the infill in my airfoils. 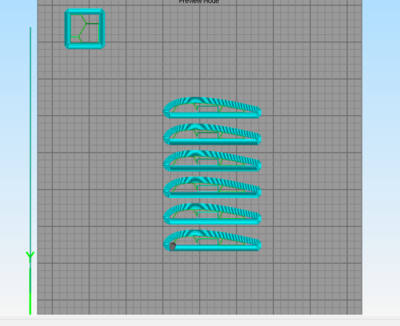 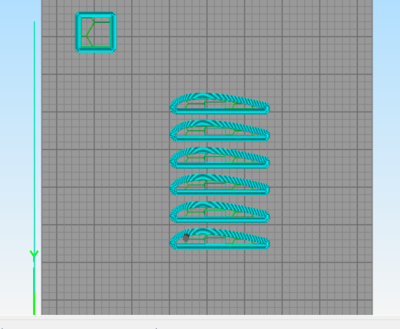 So I did achieve what I wanted, BUT it should have been easier. either the infill grid should be configurable for each item on the bed, OR the infill pattern should be fixed across the whole bed, ie not move depending on position of items on the bed.

by wirlybird
Very interesting about using the square and moving it to control the infill positions.

by dkightley
After a quick test, it appears that the support centres itself within the bounding box that encompasses all the parts.

Moving one of the outside parts changes the size of the bounding box....and its centre moves, along with the support pattern.

So.…that's why the box in the corner method to adjust the location of the support mesh works.

by ibsmith04
Nice One Doug, so all we/I have to do, is put two small objects in opposite corners of the bed, and the infill position is fixed.

That makes more sense, and it ties in with what happened to me, as I kept adding between the low airfoil and the square, ie the 2 extremes..

Thanks for your help