by PhillipM
Been trying to work out why my machine was having some issues with extruding single lines - I thought it was the extruder so stripped the machined and cleaned everything, etc, still had the issue with single extrusions being underextruded and not meeting the perimeters - couldn't work it out out, but I just loaded a new model and when previewing, I can see clearly on this one the problem, the extrusions are doing some weird stuff, any idea what's causing this? 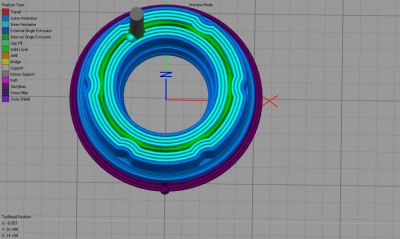 by dkightley
There's nothing "Causing" what you are describing......because there's absolutely NOTHING wrong! A 0.4mm wide extrusion will not mysteriously expand to fill a gap that is 0.6mm wide! There will be a gap.

Reduce your number of perimeters down to 2 and increase the (Infill) Outline Overlap to say 80%.....and the slicer will have a chance of filling the non-multiple of extrusion width gap!

by PhillipM
Eh? It's a single extrusion that's causing the gap, you can see it's the correct width in half the points and not in others.

Works fine on other layers: 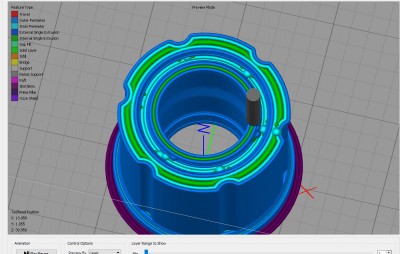 I'm not sure if it's just a rendering bug but it does seem to coincide with the models that have some issues with single extrusion fills.

by S3D-Alex
Could you please post a Factory File where you see the gaps as represented in the first image?

by PhillipM
I can send one in, but I can't post it here publically as the model is commerical.

Thank you for sending this file. We were able to confirm this issue and have documented our findings for the Development team.

In the meantime as a workaround I would suggest increasing your perimeter overlap as this will eliminate the sections of Single Extrusions that were causing errors. Thank you again for your help finding and diagnosing this!

by PhillipM
Great, unfortunately tolerances won't allow more overlap for this atm - the parts have to come out with less than a tenth of a mm size-wise to keep them on spec through temperature changes, so I'll have do a little jiggling with the sizes first.

I do have some more parts that show the same single infill issue if they need them to work from.
All times are UTC-05:00
Page 1 of 1
Powered by phpBB® Forum Software © phpBB Limited
https://www.phpbb.com/