I am printing an object that has 2 large windows in 2 different walls. I simply enabled "supports" and then ran the print. The print was a fairly large job, projected to take 17 hours. I started the print job, watched it get about half way through the first layer to make sure it was looking good. I came back 30 minutes later and saw it was looking good, and went back to watching tv. I checked it again 5 hours later only to find that all the supports were being printed at a 45 degree angle. to the object being printed.

History:
I was halving issues with the left front corner of the object curling up hours into the print job, so this time I printed the object rotated 45 degrees to the right. Since it was always the same corner for anything I printed that was wide I thought it may have been something to do with the heated bed being uneven temperature wise and rotating the object was a shot in the dark. What it printed was not expected. If you imagine printing a wall with a window in it being printed along the x-axis with supports being inserted in the openings also perfectly inline with the x-axis, it would be exactly as imagined. Now, take that wall and rotate it so the it now runs corner to corner on a diagonal 45 degree angle. When printed I was expecting to see the supports being inserted at the layout as it was in the first wall. What it does is print the wall correctly, but, the support structure it puts in is now broken into small lengths that are rotated to follow the x-axis. It gives the appearance of having vertical venation blinds half open. I wouldn't really mind except it takes a lot longer to print that one length of the wall in 25 "chunks" rotated 45 degrees to the printed wall.

If I would have looked at the print preview I would have seen it, but since it went beyond normal thinking who would have thought this was anything close to normal logic. Surely this isn't a bug that has been ignored in the last 20 months since the last update. 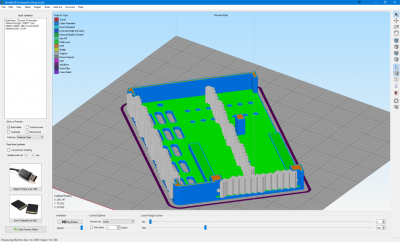 Re: supports printed at 45 degree angle

I might not be understanding fully so please correct me if I am off here but it sounds like everything is working as expected. The Support Infill Angles are relative to the build plate, not to the model. So if you wanted the supports to run parallel to your model when your model is set at 45 degrees you will want to use an infill angle of 45 degrees in the Support Infill Angles section of the Support tab.
Post Reply
2 posts • Page 1 of 1