The topic sounds quite familiar probably but the issue details seem a bit trickier this time.
While struggling with other issues I noticed that printing this stringing test piece with 100% fill and 9 outlines, the top layer has a lot of gaps, like it would be under extruding. While monitoring the print the inner layers however have no issues at all and the shells fuse together nicely.
Extruder steps are spot on so it's not that and that's why I wouldn't want to go around the problem by just increasing the extrusion multiplier.
Could this be because of the thin wall settings?

Left most print in pic with several pieces is sliced with Cura, others with S3D. 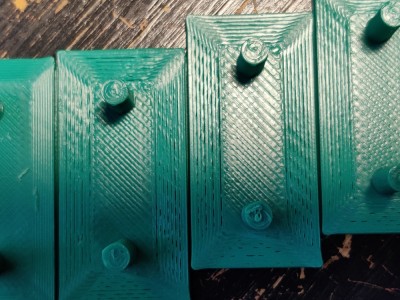 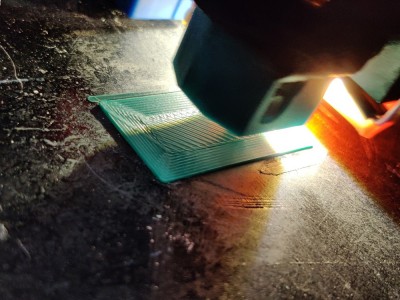 I always run the extrusion width 115-125% of the nozzle diameter. With them equal you're stretching the filament while printing.

If you have solid infill printing slower, it could be that you're printing the perimeters too fast.

I find some materials do better when I reduce the extruder multiplier on solid infill.

In your case, increase the extrusion multiplier in your process settings - then add this script and back down on the multiplier for your solid infill. Alternatively you could leave your solid infill at 100% and go something greater than 100% on your perimeters.

Was the cura part printed with the same size nozzle? The perimeters don't span nearly the same width.

If you have solid infill printing slower, it could be that you're printing the perimeters too fast.

I find some materials do better when I reduce the extruder multiplier on solid infill.

In your case, increase the extrusion multiplier in your process settings - then add this script and back down on the multiplier for your solid infill. Alternatively you could leave your solid infill at 100% and go something greater than 100% on your perimeters.

Thanks for suggestions but like said, only top layer perimeters have this issue, other layers don't and they print at the same speed.
Like said, I have 9 perimeter shells configured so that's 9 perimeter shells for every layer. This is not about the solid infill (which prints just fine, without gaps like visible in the pics but I have quite heavy underspeed for that too).

I also don't know why I should I need to increase extrusion multiplier as properly tuned extruder steps shouldn't stretch anything(?), or then my extruder would be bottlenecking it but it's a mosquito magnum clone so should be able to print 150mm/s. This is only about 18 mm^3/s.

Could be the filament too of course but still, the main question here is why do the other layers beside the top most print fine?

zemlin wrote: Was the cura part printed with the same size nozzle? The perimeters don't span nearly the same width.

Yes, same exact setup but Cura line width was different in that pic. This was accidental comparison anyway as I was troubleshooting other Marlin & S3D related issues so it was a bit poor comparison pic in that way but just verified and Cura does almost perfect job with the same 0.6 mm width as with S3D. There are some gaps between inner most perimeter and infill but that's due to other setting issues. The perimeters themselves are fused together.

Why bother asking questions when you think you already know everything?
3D printing isn't a perfect process. There are a bazillion variables. Sometimes you need to tweak things to get the best results.

zemlin wrote: ↑
Mon Mar 22, 2021 4:12 pm
Why bother asking questions when you think you already know everything?
3D printing isn't a perfect process. There are a bazillion variables. Sometimes you need to tweak things to get the best results.

Why bother answering if you get upset when you're answer isn't the holy grail? Why drag process imperfections in this discussion - like we wouldn't know that - like we would be here asking questions if it wouldn't be the case?
I meant that it doesn't (shouldn't) stretch it any more in this case as it does in other cases if extruder steps are correct and if slicer is calculating it properly. Again, there are no gabs elsewhere. Only on top layer perimeter shells and it shouldn't be any different than the layers below that in this case.

Here's a better pic of a 3rd layer. Again, same speeds apply here. I have bed heating off so it shouldn't be about temperature differences either.
Maybe it is something about in this materials properties that causes the shells to break apart once enough layers are stacked, dunno, but as for the lines getting thinner on straights I guess it's just the bowden setup pressure not keeping up with fast speeds. Marlin linear advance would maybe help a bit but can't use that due to my TMC drivers being incompatible ones.
Would be anyway neat to get more pressure compensation features in S3D too. Or get any new features really... 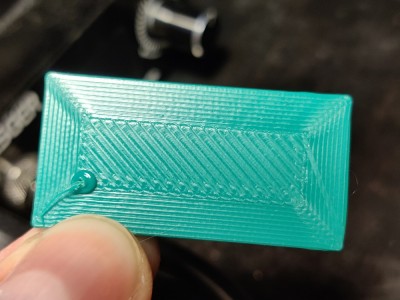 I think it's unlikely to see features like pressure/linear advance in a slicer due to the complexity of the G-Code required to replicate what's being done in firmware. My printers are direct rather than bowden. I replaced my controller boards this summer with Duet Wifi boards and the pressure advance feature has made a huge improvement in my print quality - so yes, that's a great feature.

Regarding the stretch I mentioned, I'm not making it up. I would encourage you to study the actual behavior of the extruded plastic rather than just shrug it off as nonsense. I don't know that it's contributing much, if anything, to the issue here - but regardless a better understanding of the process will improve your parts.

I do think speed may be an issue here. Are things improved if you run at a slower print speed?

I didn't shrug it off as a nonsense, you misunderstood it in the first place and well, yes my phrasing was quite directly wrong there too but like said I just meant that there shouldn't be any difference between this top layer and other layers.
My idea of this thread was just to ask if others have noticed similar thing (besides the normal under extrusion issues) and if there could be, if not a bug, then something "unideal" about my settings combination that I've missed (some weird way thin walls could interfere or something) but yeah, maybe it's just a combination of this part and material that arouse this issue so clearly. I'm surely no expert of non newtonian fluids but not all amateur in 3d printing either. I kinda hate having some magic factor to fix issues when everything should, in basic theory be in order but hey such is life

Speed does affect this for sure but again it makes me think that there's something wrong in parameters elsewhere as the multiplier should scale to all speeds but again, not an expert so maybe it doesn't. It'd just mean there's no way to perfect the prints ever as things would get over or under extruded depending on the speed of the section.

About mainboards, yeah well, you get what pay for I guess. Like said I noticed this whole thing accidentally while troubleshooting other issues. For some reason my extruder decides to quit on certain parts, always exactly at the same spot and like said I don't have the LA active that would explain it. It's so exactly at the same spot that a HW issue is pretty much ruled out. There's a ticket about it on Marlin repo open and it's still fresh but still have a funny feeling it'll never get sorted out and I have to get another board, which then would logically be a Duet just to maximize the chance of getting rid of this random stop issue (and the chance of getting several new ones).

Going from a .4mm to .6mm nozzle diameter increases the amount of material being extruded by as much as 125%, depending on your layer thickness. If you are near the limit of any one of those factors with a small nozzle, the plastic simply can't get fully heated fast enough before you're squeezing it out of the nozzle. That will also cause increased back pressure and aggravate the speed-dependent variation in your flow rate.
Post Reply
11 posts