I've run several parts with the High quality settings where the program doesn't seem to "cap off" to top of the parts. Other than that, the parts look great, which is kind of frustrating.

I thought I'd seen this discussed on a forum before, but can't seem to find it now.

I'm running off some simplified models/parts now to help troubleshoot this and the "blobbing on circles" issue I posted about earlier today. 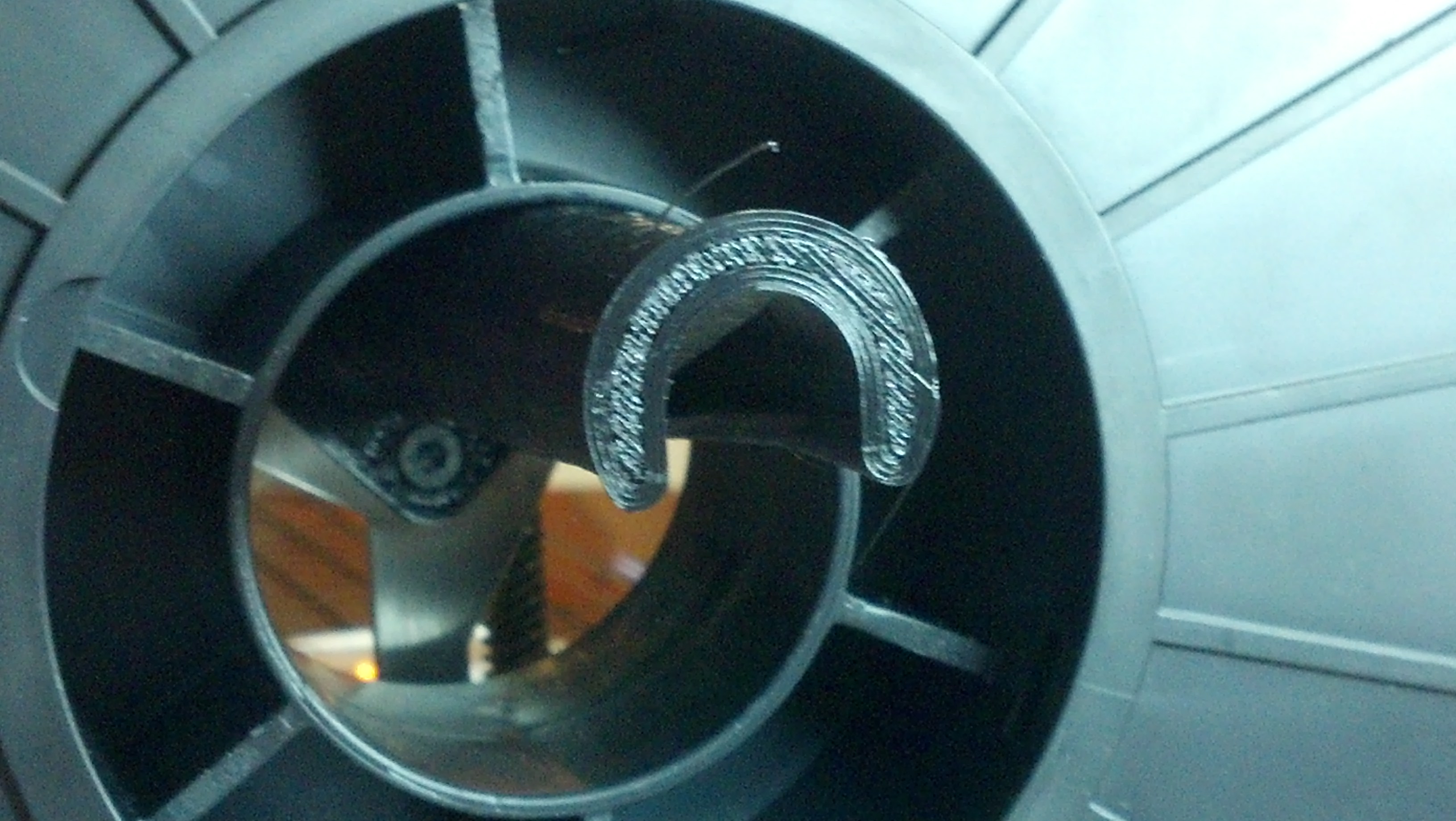 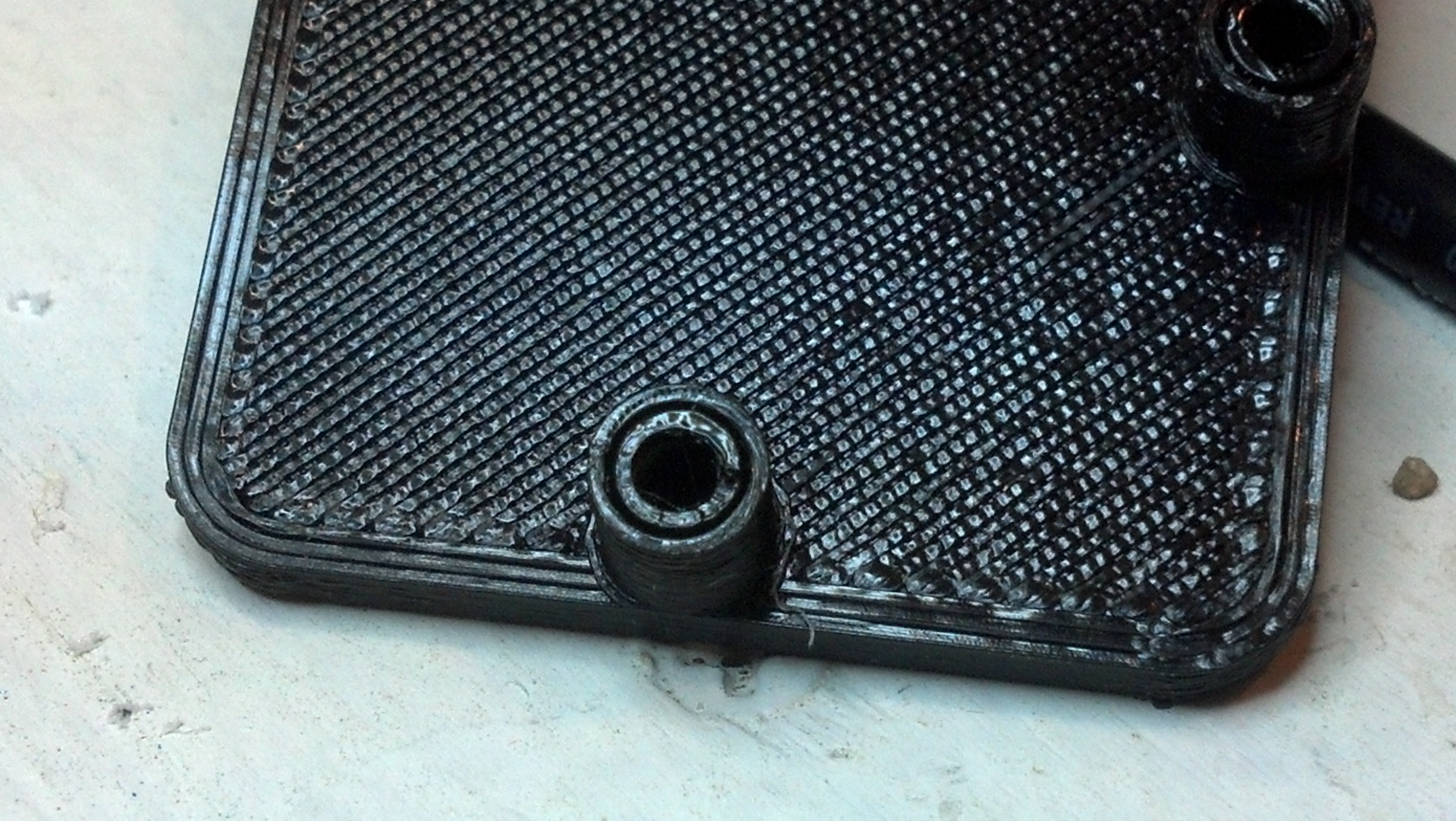 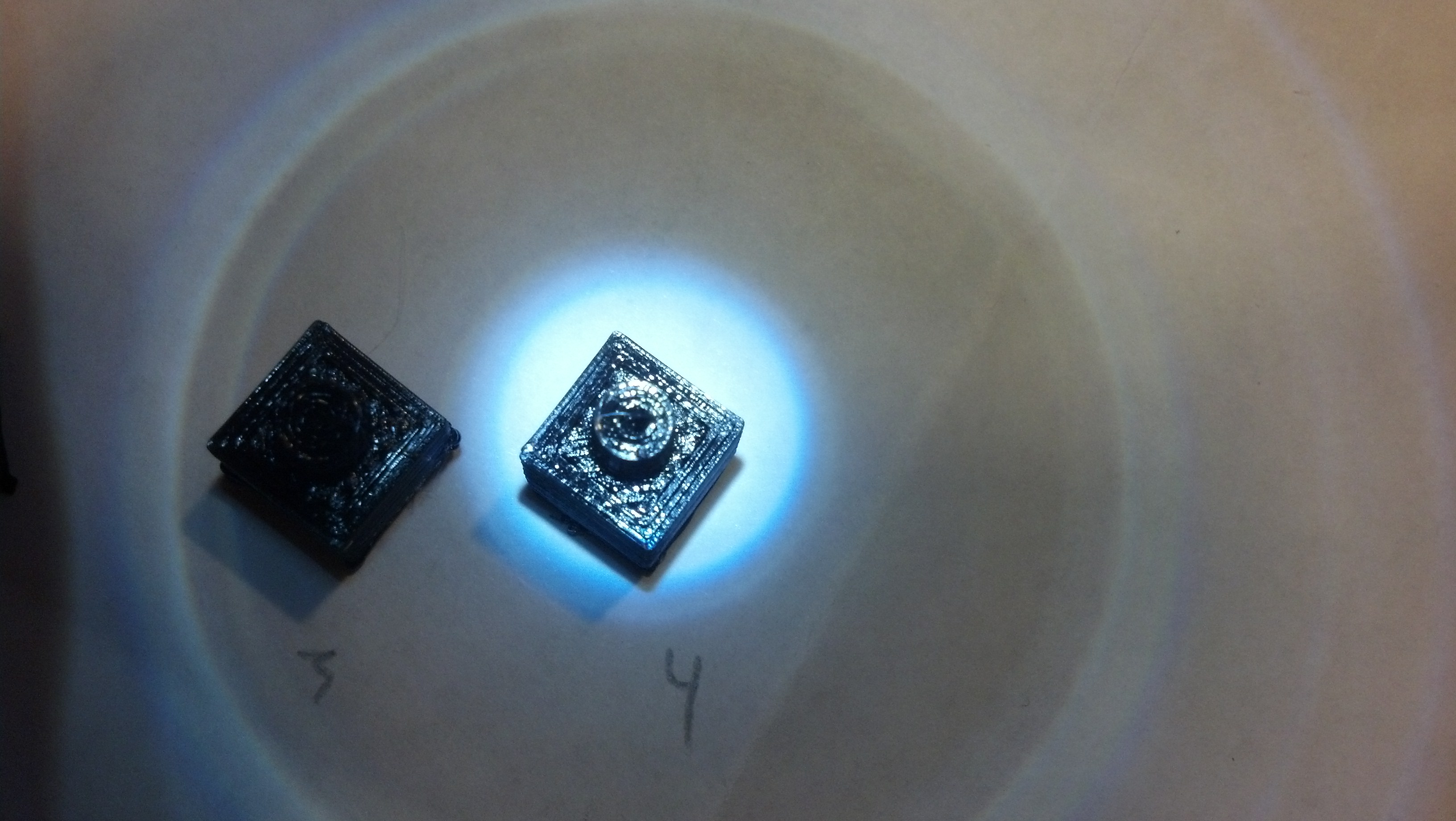 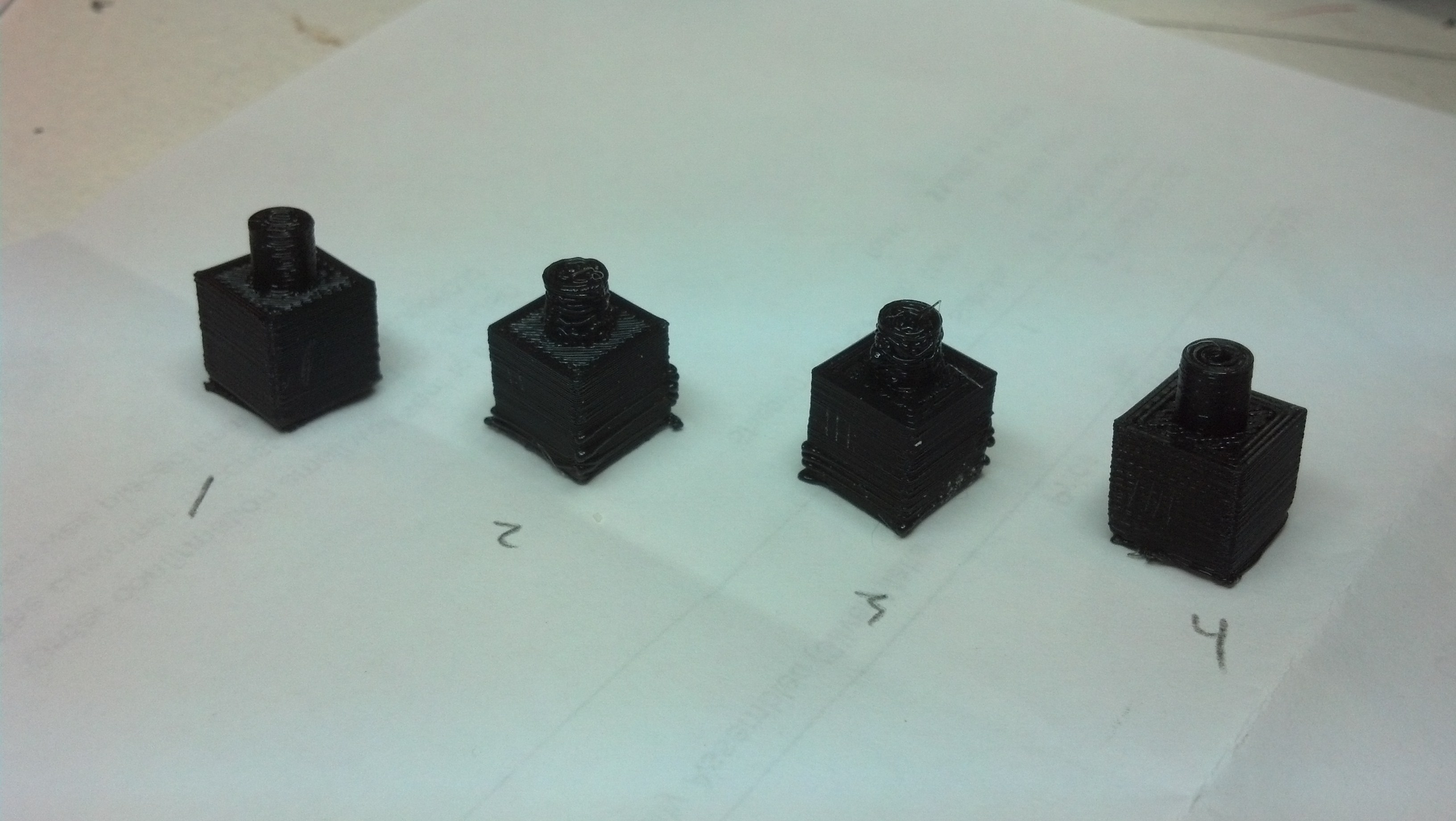 This resolves the cylinder globbing issue, but not the capping issue.

I just printed a part with 100% infill that left some uncapped areas. There is actually a cavity inside the part that is completely hollow. I stuck some strips of paper down them to illustrate.

I will be designing a lot of thin walled parts. The software and machine is completely useless to me if I cant do this sort of thing. The walls in the picture are nominally 3 and 4 mm respectively.

I've been playing with the minimum infill length parameter in the software. I turned it all the way down to zero, and it still shows these walls being hollow in the preview. 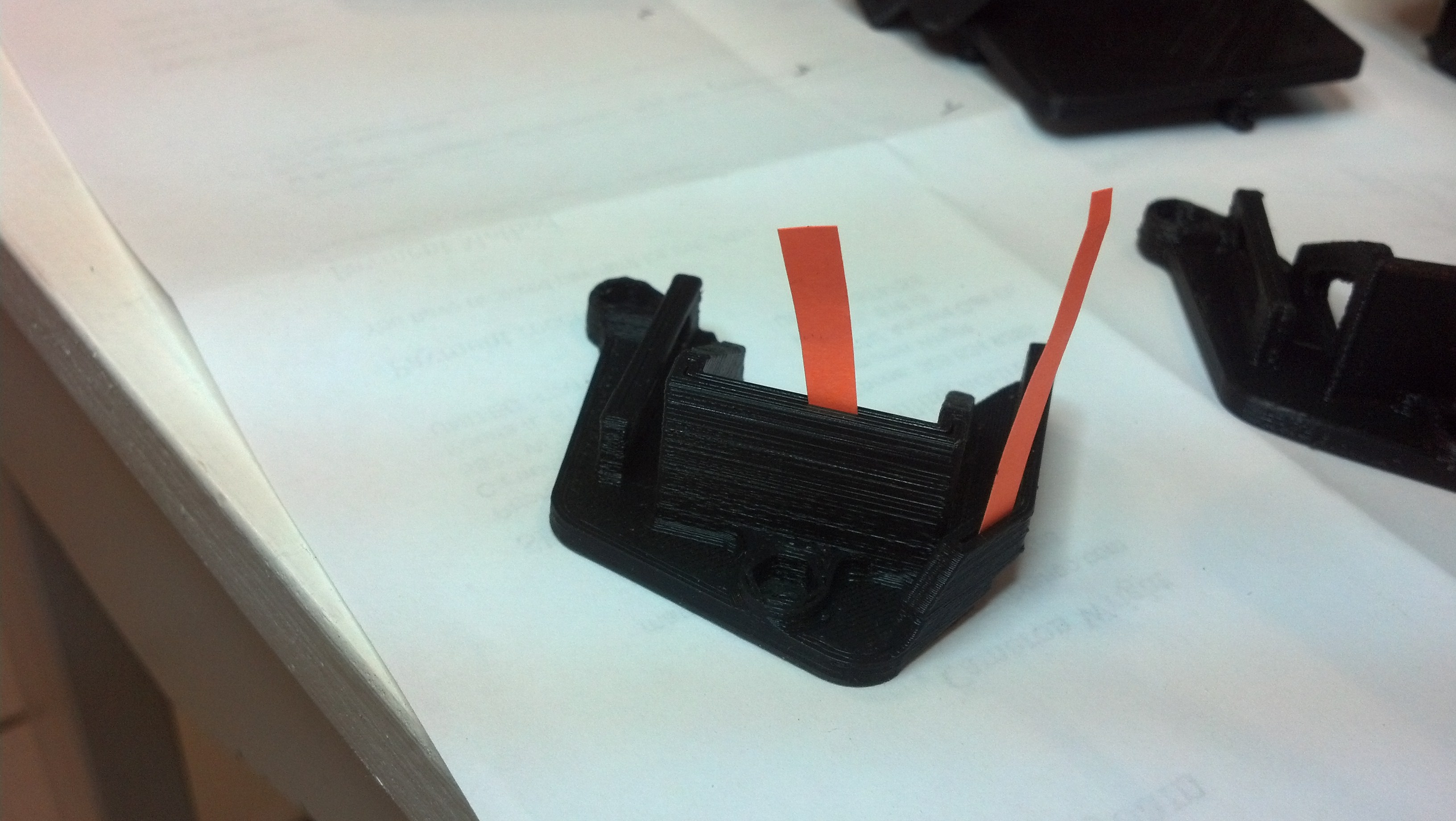 I think I figured something out.

Let's say you have a 3 mm thick wall in the model AND in the layers settings you have 3 perimeter shells selected.

The width of these 3 perimeter shells (6 passes) is wider than 3 mm. The program is smart enough drop one of the shells as it won't fit inside the space. HOWEVER,from that point on, it doesn't matter what your infill settings are, it isn't going to put material in the gap that is left where there wasn't room for a perimeter shell. It also doesn't matter how many "solid layers" you ask for at the top and bottom nor does it matter how many "solid diaphrams" you ask for on the other tab. You are getting a cavity in the part, period.

It seems like there needs to be some controllable logic for what you want to happen if there are more perimeter shells selected than the part can handle. At a minimum you need to be able to force it to "cap" the remaining cavity.

I've attached two factory files that I think illustrate the point (if you look at the G-code layer by layer, you can see the differences).

Hi,
have you been able to find a solution to this?

I guess I'm having the same issue here, trying to print a enclosure with a wall thikness of 3mm and getting two walls with space in between which are not closed at the top...

On the layer tab, turn down the number of perimeter shells to 1 and increase the amount of infill you are using to at least 60%.

now you'll get a top layer of the part that is composed of the outline and infill.

Ok, tied that and it doesn't work,not sure why.

But it helped me anyway because I understood that it works in the medium quality setting which is just fine for me now...

But still it would also be nice to have in high quality mode.

Have you tried playing with extrusion diameter or unchecking "auto extrusion width?" Playing with these settings along with extrusion multiplier may help. If your diameter is too small, you will get gaps. If this doesn't help, it may be your firmware not adjusting the width properly, which is also directly proportional to the material flow. Your firmware should be calculating how much flow you need to achieve a desired extrusion width. My thoughts anyway.

The root cause of the problem I was seeing is how the slicer resolves the issue of the what to do with the infill when the feature thickness is less than the thickness dictated by the number of perimeter shells.

For example, let's say I'm calling for 3 perimeter shells. Based on my nozzle and filiment, my extrusion width is coming out to 0.6 mm. For a 3 mm wall feature, the solver will try to put in a total of 6 widths of the perimeter shell. In this case, 6x0.6 it will come out to 3.6 mm, which wont fit. The software is smart enough to recognize this and it dutifully drops out the inner most perimeter shell. However, it isn't smart enough to go back and attempt to put an infill in that space either. Thus, in this example, I ended up with 4 x 0.6 of the width occupied by perimeter shells (2.4 mm) and am left with an 0.6 mm gap between the 1.2 mm walls. This 0.6 gap is wide enough that the machine could have made an extra pass and filled it in with infill, but it doesn't. The important thing is this, once the solver starts dropping the "inside" perimeter shells, no combination of infill settings will cause it to fill in the gap that is left.

What you are alluding to is tweaking the extrusion settings to either make the extrusion a little bit wider such that it fills in the 3 mm exactly or make it thinner so that the number of perimeter shells fit in the space provided for in the design file. Both of these things could be done too.
Post Reply
24 posts