Overhangs not being supported

Overhangs not being supported

by AK_Eric
Recently sliced up a model that needed supports, and in the preview I found many areas (which I'll coin a "floating feature") that were unsupported, which I found odd. I tried both the manual support and auto support generation and they both gave the same results. So I made up a really simple model that exposes the failure and tried it: Same problem. I have an image that shows the problem below: 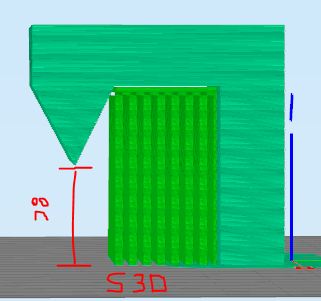 Here is the test stl with a floating feature:

As a test I sliced this in Makerware, and proper supports were generated: 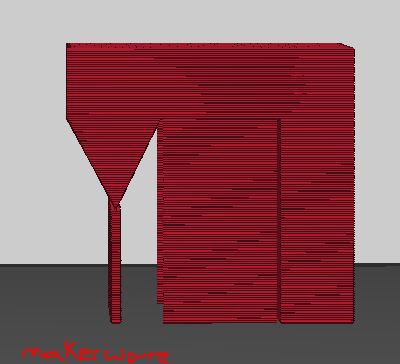 In the meantime my workaround was just to add in manual supports where I noticed unsupported features. But the real model I'm printing is far more complex than the example, so I have no good way of knowing if I've caught all the floaty-bits or not.

Am I missing an obvious setting, or is this a bug?

by jgourd
You can change the angle for which it creates support structures. That ought to do it.

by dsegel
It is strange. You have to lower the angle to 26 degrees before it'll add support, and then it overdoes it and adds support all the way up the sides of the angled piece. I would just add manual support in this case.

by AK_Eric
Changing the support angle isn't a fix: I'd call that triangle shape a "floating feature", and problem is the 'support engine' is failing to catch the "floating" aspect of it: If that triangle feature was touching the floor it would print totally fine with zero supports: It's that it's floating in space that's causing the problem.

I added manual support to fix this issue in this instance, but if you had interior overhangs like this that weren't easily seen in the preview, they'd go completely missed and ruin the print.

by jimc
i can take a guess at what is happening here but there is really no fix other than place manual support. i would say that since the angle is certainly printable like you say. well within the 45 deg threshold. the point is coming to a razor edge and its just not enough to activate that row on the support grid. there actually is no surface there that falls within the parameters to trigger the support yet at the same time there it is...lol. while the angles are within spec it doesnt sense that its floating. i would certainly say this is something that should be addressed by s3d. this is the first time i have ever seen this come up.

by AK_Eric
Wanted to bump this: This hasn't been fixed in 3.0:

I've had a number of failed prints because of this issue: Imagine a complex model of a bust/head with stuff hanging off it (locks of hair, gizmos, etc): It has lots of these 'floating features': You'd expect the slicer to catch them (based on my time with Makerware / RepG), but it doesn't, so the first print fails: I have to manually identify all the parts with spaghetti spilling out the bottom, and go back in and manually add the support.

3.0 has a ton of great fixes, but I would consider this a fundamental feature that is still missing

Basically, any time I have S3D auto-add support, I then have to go in and manually check everything and add in whats missing.

by KC_703
Have you tried changing the support pillar resolution... maybe 1 or .5mm?

AK_Eric wrote:Wanted to bump this: This hasn't been fixed in 3.0:

I've had a number of failed prints because of this issue:.

You shouldn't have *any* failed prints. It's easy enough to see where the support is going to be placed during the preview before you save the gcode or initiate a print; if it's not putting support where it needs to be, go back and fix it first.

I encounter this problem a fair amount with small detailed parts. Usually I can fix it by just lowering the support resolution (as stated above), or if not then by manually placing the support.

by AK_Eric
Sure a human can go in there and try to find the failure spots and add manual support. S3D does a great job of letting you do that.
But this is something a robot should do, not a human. Some of my models make this a non-trivial issue, even with the cross-section tool, based on occluding support, internal mesh, etc.
Basically if Makerware can do this in one buttonpress, I sort of expect something as robust as S3D to implement it as well.
Why would anyone ague against hitting baseline?

by jimmybuckets
I tried your test part on Kisslicer and it does the same thing as S3d until you get to around 23-25 degrees for the angle cut off...then it fills in the entire area that is unsupported. FYI. The Makerware print would also fail. The upside down triangle would fall over or come loose from the support well before finished. S3d at least gives you the option to place support where you do and don't want it. It would be nice if there were at least some sort of warning that popped up after slicing that said something to the effect of "unsupported print area would you like to inspect before processing".
All times are UTC-05:00
Page 1 of 5
Powered by phpBB® Forum Software © phpBB Limited
https://www.phpbb.com/