by laird
For some reason that I've not figured out yet, my prints with S3D have blobs on the exterior.

This 'marvin keychain' test print makes it pretty obvious. It's a tiny print photographed with harsh lighting from above, which makes it exaggerated, but as you can see, while most of the surface is fine, but there are blobs sticking out that make the print look terrible. The same model printed with Makerware is fine. In general I prefer S3D, but I'd really like to get this figured out.

Printer is FlashForge Pro running Sailfish. So no active cooling - thus the dropping on the loop of the keychain.

That I know how to fix. But those blobs are just weird. 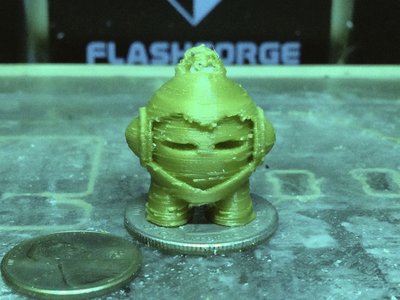 by jimc
Its a combination of overextrusion and oozing from incorrect ooze control settings. You need some retraction, coasting and wipe. Start with the default 1mm and move up from there. On a tiny part not having cooling is tough also. Print this model with something else

by ole_blue_moon
Also on the advanced tab, ooze control, try turning off "only retract over open spaces."

by laird
I have retraction, coasting and wipe on already, and 'only retract over open spaces' is off. That being said, the extruder shouldn't be retracting all over the print like this - the exterior is a few lines that print continuously, with almost all of the moves inside the part. Could S3D be generating spurious retract commands?

I'm pretty sure that it's not over-extrusion - the large majority of the surface area is fine, so it's not generally over-extruding (i.e. the filament diameter and steps per mm are fine). The problem is the blobs that appear in very specific locations for some reason. The blobs are actually only a few percent of the surface area, and fairly large areas are completely smooth, so it's triggered by something specific.

It also happens on two different printers (a Replicator and a FlashForge) so it's not an individual machine's hardware. They're both running Sailfish, which might be relevant. And the "pimples" occur with S3D but not MakerWare, on both printers, so I'm thinking the difference has to be the software, not the printers.

In my experience, these "pimples" are caused by the printer briefly stopping instead of moving continuously, such as by the controller being able to keep up with the command stream causing pauses while it catches up, so too much plastic is extruded. But I can't figure out why the extruder would be stopping all over this print from S3D.

I'll try making extraction more than 1mm and see if it changes anything. Perhaps I'll get lucky.

And yes, as I mentioned, active cooling will help with the drooping at the top. But it's not related to the blobs.

by AndersE
I had these problems also, even when using retract and coast, until i tried the "experimental ooze control" option. That helped a lot.
BUT i want to know what it does and how it actually works.

Just started using S3D and a bit disappointing so far. Blobs all over the place ...see pic.

by JoeJ
What printer are you using? But more importantly, what settings are you using? Are these profiles that you made on your own? It looks like you definitely have some bad retraction/ooze settings

JoeJ wrote:What printer are you using? But more importantly, what settings are you using? Are these profiles that you made on your own? It looks like you definitely have some bad retraction/ooze settings

Oops rookie mistake ...filament was set to 1.75 instead of 3mm. Now we know what that looks like

Could have sworn id set it to 3, but then again playing around with learning S3D that i could have easily changed/ reset something . Just to eager to get going i guess

Anyway it leads me to think the OP has an over extrusion problem as well , just not as extreme as i was experiencing.
So i would suggest he double check his filament settings and then try reducing the extrusion multiplier

by laird
I don't think it's over-extrusion. The clue, I think, is that other than the 'zits' in specific areas the prints are fine - a calibration cube, for example, looks fine, as do wide areas of other prints, so in general extrusion is properly calibrated (diameter, temperature, etc.) - the issue has to do with something specific that S3D is generating around retracts, different from all the other slicers I've used. Turning up retraction (from the default 1mm to 2mm) seems to help a little, but the prints are still pretty ugly. So any advice there is appreciated. I'm surprised at the quantity of retracts (when I turned on 'show retraction moves' they are the spheres in the path, and they're all over the place.

Here are the relevant settings (which were the same for the earlier photo): 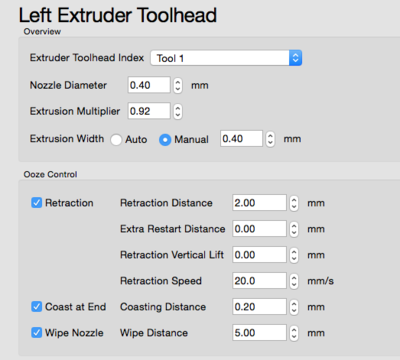 One thing I did notice when inspecting the gcode is that S3D is (at least in this one part) placing some of the infill the outside, which would explain the odd very long "blobs". They're the green lines in this screen shot: 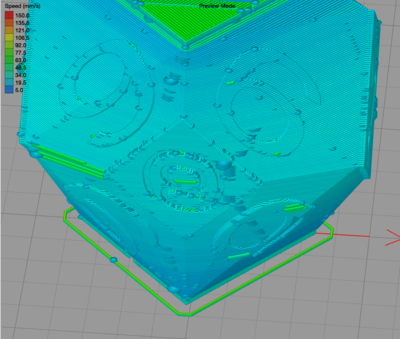 Using version 2.2.2, but consistent with what I saw earlier.

by laird
Reading http://www.forum.simplify3d.com/viewtopic.php?f=9&t=735 it looks like users have found the real problem - S3D pauses the print head while retracting, while other slicers continue motion while retracting, and the pause causes the blobs. Looks like there's a script to modify the gcode to remove the pause, but it'd be nice if S3D incorporated the fix.
All times are UTC-04:00
Page 1 of 2
Powered by phpBB® Forum Software © phpBB Limited
https://www.phpbb.com/