I am having troubles getting a raft that will separate from my relatively simple prints. I have various reasons to use a raft and I'm an experienced printer so my reasons are well considered. So far I am finding the top of the raft always separates well from the penultimate layer of the raft far too easily but getting the top layer away from the print is much harder.

So far I have tried:
- A 5 layer raft instead of the default 3
- Running low temp (up to –20 degrees C lower in some cases) to the point of verging on a jam - I've tried this just for the first layer of the print and across the whole print.
- Raft separation gap up to 0.45mm
- Extra retraction
- Genuine and non genuine ABS
- Low and high print speed
- Rechecking/calibrating bed level
- Bed as low as 60 C and manually confirmed with IR thermometer

The printer is a Da Vinci 1.0A with original 1.0.5 firmware. Filament is ABS both from a genuine cartridge that hasn't been modded and from a premium ABS I use all the time on my repraps and UPs.

Is there something I am missing to get raft separation like others are showing in videos and reports? Any suggestions?

As I said in my inital post I have tried increasing the separation distance up to 0.45mm with no improvement at all. I staggered this through several test prints increasing the separation more and more. At no point did it have any improved effect on removing the raft. I know it should ... but it didn't... hence my initial post. Why are my rafts not separating ... I'm beginning to feel like the ability to separate rafts with this software is one big elaborate hoax.

I've printed many rafts on the same printer you have and they separate fine, even with a lower separation distance! So I'm not sure what you are doing differently... Why don't you post your factory file?

I started with generic defaults supplied in the Da Vinci profile

One more thing. In my common test print you can see that in some areas the raft does remove acceptably (shown in the image in cyan) but in other areas it is very strongly adhered to the print layer (yellow). Separation distance is 0.25mm on this example which is printed with a 0.2mm layer height. 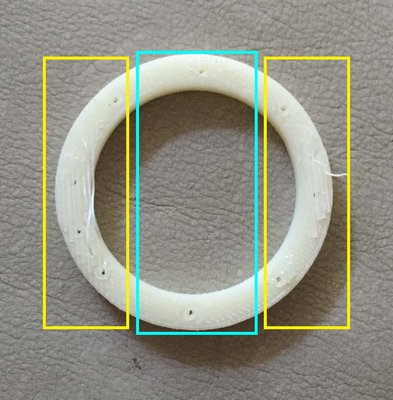 So nobody has a single suggestion?

Waiting on an answer on this, too. I just needed a raft for the first time, and the top-most layers wouldn't come off as easily as I would expect. I needed to carefully slice it off with an X-acto knife.

Well I raised the issue with support but I only get one answer a week which has then suggested something I have already tried. Clearly they don't even read through the information sent despite it being very concise and short. Seriously disappointed in the software and the support so far ... not a good report card to give to the uni.

Although I'm not able to offer a solution, I can share my theory as to why you are experiencing this seemingly strange removal issue....based purely on my observations and experience with printing with rafts.

Stepping back from the problem, lets think about what we want rafts for. Well, its first job is to provide a level base onto which the printer can start printing an object. Secondly, it has to provide sufficient "grip" to not only keep the expanding object stable whilst its being printed, but also keep the object from curling up as a result of shrinkage forces. And finally, contradicting the second requirement, we want it to easily separate from the printed object once the printing has finished.

The number of layers in the raft is the main factor that allows the first requirement to be fulfilled. If the build pate is off-level or bowed, the first raft layer will vary in thickness to accomodate the varying gap. A second layer is usually required to give a consistent surface for the object to sit.

The second and third reasons, which are contradictory, leave us with having to make a compromise between the first layer of the object adhering to the top layer of the raft, but then not adhering too well so that the raft can be peeled away.

Going back to the reported issue. Based on my own printing, and on the above photograph, I have not seen any direct evidence of variance in the adhesion between the top layer of the raft and the first layer of the object apart from where an occasional stray strand gets included in the raft as its printed. What I have had happen...and what I can observe in the photograph...is differences in the way in which the raft layers peel away from the object when peeled away in differing directions. I'll explain how I see the mechanism of peeling.....

When you peel the raft away "with the grain" of the top layer (ie exactly top to bottom in the photo), you're attempting to roll each strand of the top raft layer away, and at any one time the "width" of the tear is a fraction of the diameter of the strand. Now, when peeling "cross grain", you are attempting to tear a width that is the length of the strand attached to the object. As the accumulated "width" of tear between the top layer and the layer underneath is substatially less , then the tendancy is for the second layer to break away before you have put sufficient pull on the top layer! Peeling away at angles between the two tends to give varying results....

Detail in the bottom photo support my theory. Look at the 5 o'clock position on the ring. There's a hole where the raft has been ripped away at approx 45 degrees in the direction bottom left to top right, where you can see short bits of the top layer have separated from the second layer. With a circular object, the tendency is to lever the raft off from the outside all the way round. Top and bottom, the tearing force is mostly "with the grain" of the top layer....and left and right is "against the grain".

So, if I've identified the problem....how do we solve it? And as far as I can see, I don't think there's a definitive answer.....other than peel carefully "with the grain" of the top layar as much as possible, and finish off with a sharp knife.

Of course there's a possible software answer....to have control over the direction and pattern of the way in which the top layer is laid down. But I daren't even think about how to even define this, never mind the software guys having to program it!
Doug Kightley
Volunteer at the National Tramway Museum http://www.tramway.co.uk
Railway modeller and webmaster at http://www.talkingtgauge.net
Post Reply
17 posts