Factory file is attached. My settings are:
I wanted to know when S3D began generating gap-fill, so I made an STL in OpenSCAD that generated ribs of varying thickness. Their thickness increased from 0.0 mm thick to 2.0 mm thick in 0.05 mm increments. I imported and sliced it, but the gap-fill only began to appear at 1.45 mm thickness and the perimeter infill only appeared at 1.55 mm thickness. Since my overlap is 50%, I expected the perimeter infill to come in much earlier, starting at 1.25 mm thickness as the diagram below shows: Instead, this is what we get. A gap between the layers, which is the opposite of an overlap!

Could we please get either a fix or a better explanation of what gap-fill is actually doing? Because it's clear that "Allowed perimeter overlap" should probably be renamed to something like, "Preference for interior perimeter".

You have some very odd gap fill settings, which are affecting when the gap fill is used. Here's what I would do personally
Changing those two settings makes a big difference. I attached a screenshot of what it looks like when slicing now. 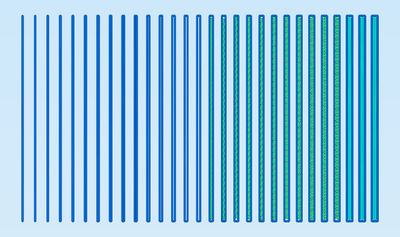 Thanks for that! It definitely helps to have gap-fill coming in at 1.30 mm instead of 1.45 mm.

I too am confused by "perimeter overlap".

Playing with the setting, I have the impression that the greater the "perimeter overlap" the LESS LIKELY you will find gap fill in a narrow space?

That is exactly the opposite of what I would "expect".

If you are increasing the amount of "overlap" allowed with the perimeter wall, then surely you are creating MORE space to fit in gap fill, so one might expect it to be MORE likely to find gap fill in a given space.

That's exactly why I made this thread, and why I suggested that the feature should be renamed to "Preference for interior perimeter" because that seems to be closer to what it's actually doing. It was great to get a solution to the problem, but it would be better to truly understand it.

BUT between Perimeter and Perimeter.

In certain situations a second or third perimeter is not "allowed" because of space constraints. So perhaps Gapfill will be printed. However if Perimeters are allowed to overlap by a large enough percentage, then another perimeter can be squeezed in.

It certainly is confusing!

And if perimeters do overlap by more than a little bit, where does all the plastic go?

CompoundCarl wrote: ↑
Sun Mar 06, 2016 9:45 am
You have some very odd gap fill settings, which are affecting when the gap fill is used. Here's what I would do personally
Changing those two settings makes a big difference. I attached a screenshot of what it looks like when slicing now.

Thank you this post. I was having trouble with the first layer (and actually subsequent layers) of my model on a raft, the perimeters were fine but fill between the perimeters was kind of sparse. Knowing now that infill parameters affected this allowed me to improve that first and subsequent outer layers.

I thought that the infill parameters were only for the internal orange infill and not the edge i.e. outer surfaces a.k.a. top and bottom.

Thanks for the advice regarding these settings.

I recreated a test model making it easier to identify dimensions, see attached and below. 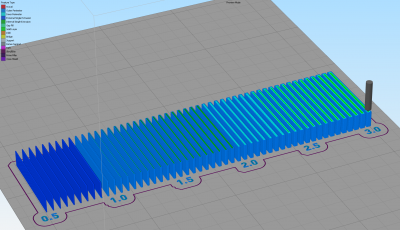