Just using the printer for the first time in a few months and I was trying to print out a bracket for a battery, the print was going fine up until about halfway through then the print head stopped, but the extruder was still going. After about 30 seconds or so it started moving again but there was a blob of ABS left behind. Then a couple of minutes later it did it again but left a much larger blob. I stopped the print there as there was no point in continuing with it.

I watched the Simplify3D screen while the head was stopped and the preview screen showed the print head as still moving, though the x/y/z co-ordinates readout showed it as not moving. The the x/y/z numbers started to jitter for another few seconds, then the print head began to move again.
Running the Flashforge Creator Dual from a brand-new laptop with Windows 10 using the 'print over USB' option. Simplfy3D 3.0.2

I think, looking at some older prints, it may have been doing this for a while as a few of them have several layers missing in them and so they split apart very easily. Would it be better to perhaps better to get the printer to print from the memory card? 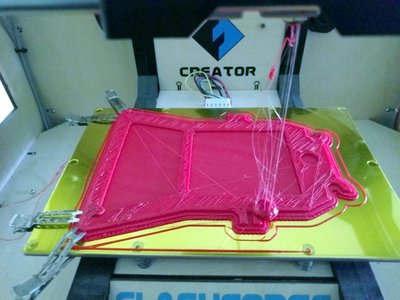 Re: Printer (partly) stopping halfway through the print

You will have to use SD card printing as there's an issue in Windows 10 with printing via USB:
viewtopic.php?f=9&t=3348
Doug Kightley
Volunteer at the National Tramway Museum http://www.tramway.co.uk
Railway modeller and webmaster at http://www.talkingtgauge.net

Re: Printer (partly) stopping halfway through the print