I am trying to print a housing for an orange pi. However I cannot get simplify to print the walls as a solid, without this bearing-killing infill

I tried increasing the number of walls, but with no luck. Any other hint from the professional users? 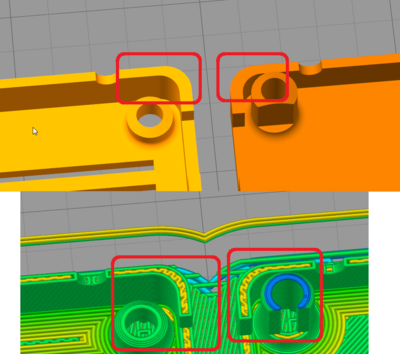 You can try setting your infill to 100%.

you have a wall there which varies in width so i am wondering how you would expect your printer to fill that 100% without doing a zig-zagging infill? its a narrow wall so the only way to do it is just like you have there. single perimeter and 100% infill.

Have you tried printing? Though it looks like there may be space between the extrusions, the actual extrusion should fill in any gaps.

The issue has to do with S3D's thin wall behavior, which is a major topic of discussion on this forum. S3D will only fill with perimeters in a solid fashion if the wall thickness is approximately an even integer multiple of the extrusion width. It can be slightly less than that depending on the amount of acceptible perimeter overlap you have specified.

If it is not an even multiple, S3D will either fill it with your standard infill pattern. If the the gap is less than a single extrusion width, S3D will often leave the space between the perimeters empty.

A number of us are begging for the next version to have improved thin-wall and gap-fill behavior in the next version. You can read about it here: viewtopic.php?f=23&t=3471
Post Reply
5 posts • Page 1 of 1