I have noticed a definite decline in the slicing and bridging algorithms since version 3 was released.

As an example I've just printed a model with a duct 50mm long and 8 mm wide.
The top needs bridging.
Now you would think that the first bridging layer would have gone horizontally across the 8mm gap.
Nope, it goes lengthwise and fails.
I have fiddled with the bridging settings ad infinitum and the best I can get is a slightly diagonal angle - but still across the long axis.
I what universe does this make any sense ?

I can't remember any bridging issues with version 2. But I'm seeing more and more with 3.(whatever).

The slicing algorithms are at the heart of any slicer, and at the moment on simplify3d some aspects are pretty awful.

Is there any way i can convince it to bridge across the short axis and not the bloody long axis ?

On your first example have you tried rotating the part 90 degrees then see how the bridging lines up? This has worked sometimes for me in a similar situation.

I think you need to at least post an image of what you're trying to print. Even better.....a factory file.

Its very difficult to give advise about something when you only have a very, very brief description of what the perceived issue is!

I have a hunch about what may be wrong......but its based on a certain set of facts. And none of these facts have been given!!!
Doug Kightley
Volunteer at the National Tramway Museum http://www.tramway.co.uk
Railway modeller and webmaster at http://www.talkingtgauge.net But no matter what i do - it simply refuses to do anything even remotely sensible and does this every time. Even on the machines with cooling ducts in place, they can't bridge a gap this long. This is bloody ridiculous. I'm now forced to go and wrestle with cura. Actually before I do that I'm going to reinstall a version 2 of s3d and see if that will do the job better.
I'm sure I never used to have these issues.
Could be wrong.
Yep - I was wrong. Bridging algorithms have always been bloody awful.
2.2.2 does exactly the same thing.

Even if this duct was installed - there is no way it could bridge that long a gap. This should be an easy print - even without a print area cooling fan.
It just needs to bridge a 3mm gap. But instead chooses a 50mm gap.
I'm not being unrealistic here, Algorithm looks at gap: compares length by width - chooses shortest path to bridge.
Surely that's what it SHOULD do ?

And i really don't like cura. But needs must when the expensive software turns out to be bloody awful at bridging.

From looking at that model, that's actually the exact direction that I would expect it to use! Bridging means that you are moving from one foundation to another, but in your case, your infill has NO foundation below it, so there's nothing to bridge between. Even if it went 90 degrees in the other direction, it would still fail, as there's nothing below it.

If you want the software to choose a better bridging direction, then you need to make sure there is actually some kind of foundation for the bridge to attach to. For your specific part, if you set the number of perimeter outlines to 1, then it looks like your sidewalls are large enough that it would have a little edge for the bridge to grab onto. So I suspect that would make it go the correct direction.

If you want to post the factory file, I'm happy to test this theory

curious aardvark wrote: I even put a central wall in the duct to encourage s3d to bridge the really short gaps.

Make outside walls thicker, and that central wall too (at least 2 perimeters thicker then number of perimeters you are printing) and you will work around this Simplify3D bug. Simplify3D calculate the bridging only after it already printed the perimeters, it will not print bridging line instead of perimeter on that part of the wall (what you'd expect). What you can do, if you can't make whole wall thicker, just add 45 degree chamfer between wall and ceiling to add width on which Simplify3D knows how to lay bridge on. If chamfer is a problem (don't see why but..), you can make 3 processes, one process just below the bridge that's normal, one process just for the bridge layer where you set number of perimeters to be zero and then third process for the rest of the print - this I never tried but might work

look at the attached images 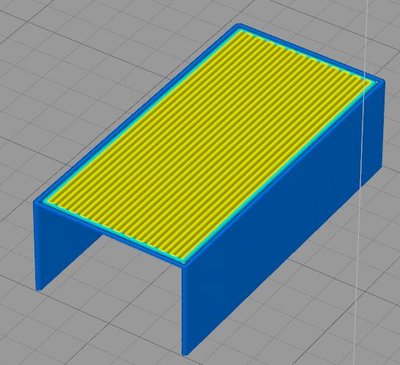 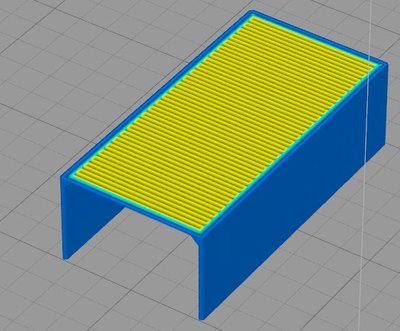 brian442 wrote:Even if it went 90 degrees in the other direction, it would still fail, as there's nothing below it.

But it won't be successful at all if it prints in that direction. There's nothing to support each of the lines that are extruded, so the endpoints of each line would just fall down. With the direction that the software originally chose, at least there is one line that is 100% supported. If it goes in the 90 degree direction, none of the lines would have proper support!

As you showed, if you have a part that actually has an area that is supported from below, the software chooses the right direction.

If the author wants to post the factory file, I still think my suggestion above will work to set the number of perimeters to 1

the walls are as thick as I want them - 1 mm - two lines.
I don't see why I should have to cripple the design to work around awful bridging algorithms.
need a s much airflow as possible, which means thin walls and large gaps.

Cura bridges this part perfectly by going horizontal.
I would wager that makerbot and slic3r do so as well.
Going to take me a while to fettle the rest of the settings, as that was the only part of the print that was any good.
But if s3d doesn't change this, I'll have to stop recommending it.
Just ridiculous.

This is basic common sense.

As far as there being no foundation to print on horizontally - there are three walls - 1mm thick.
I've set the bridging setting to overlap existing structures by 1 mm.

It actually draws a line across both ends of the duct so that it can try and anchor the long ways bridge.
So it can 'see' the walls.

I will have a piss about with outlines,
And try the chamfer if that doesn't work.

But it's still a really poor algorithm.

And then there's the habit s3d has of printing things in midair, when there are - again - better alternatives.

So if you want it to bridge in the correct direction, you need to make sure your part has an appropriate foundation in that direction. Post your factory file here and I will show you how to do this.

No, that is not correct. Bridging means you are trying to span a gap from one foundation to another.

And if you drop perimeter priority below bridge priority you have foundation and you can print this properly.
The way it is calculated now Simplify3D prints perimeter in mid air and then attaches the bridge to its side -> no freaking way it will ever work. Not to mention it's not on top of it but to the side -> completely identical to 90 degree

curious aardvark wrote: I don't see why I should have to cripple the design to work around awful bridging algorithms.
need a s much airflow as possible, which means thin walls and large gaps.

. it solves the Simplify3D bug + make part lot stronger (no matter if you print it with slic3r or cura or Simplify3D, no matter how the bridge is built) + helps with turbulence so should be used where possible (in air duct, always)

anyhow the Simplify3D behavior is still a bug, this is just a good way to work around it


curious aardvark wrote: Cura bridges this part perfectly by going horizontal.
I would wager that makerbot and slic3r do so as well.


curious aardvark wrote: As far as there being no foundation to print on horizontally - there are three walls - 1mm thick.
I've set the bridging setting to overlap existing structures by 1 mm.

It actually draws a line across both ends of the duct so that it can try and anchor the long ways bridge.
So it can 'see' the walls.

That's the problem, Simplify3D prints perimeters first, and after printing them there are no more "foundations" left, they are "used" by the perimeter

.. that's the major bug with Simplify3D as it uses the space with perimeters and then it can't find place where to put the bridge on. If it calculated bridging first and then put in perimeters (where there's space) most of the bridging bugs will be gone, but ...


curious aardvark wrote: And then there's the habit s3d has of printing things in midair, when there are - again - better alternatives.

yes. often they print in mid-air. I assume they are forcing this "support everywhere" thing as they tend to have a pretty decent support system so bridging and overhangs are not nearly as good as they can be