I did a bunch of tests yesterday.
I'll post the full results later.

Question: Is there anyone with this problem using a printer other than the Leapfrog Creatr?

Here is a quick overview of what I did find:
1) It's can't be G92 E0. Kisslicer uses that too and prints sliced with that and printed using S3D as the host come out fine.
2) It's not skipping steps due to speed. I ran some tests at very slow speeds and the part still had a huge skew in the Y+ direction (but in this case not in the x-axis). (Kisslicer parts printed at a lot faster speeds are okay.)
3) EMI seems highly unlikely since only slices done with S3D have the problem.
4) The skew problem follows the gcode file from S3D. Running the gcode from S3D using Repetier as the host are still skewed. Parts sliced with Kisslicer and using Repetier are fine.
5) The part I'm using (which I unfortunately can't post) is a small round part with "flanges" at the top and bottom. The flanges at the top and bottom print straight, but the center section is skewed. That seems to indicated that the geometry of the part is involved somehow. (The part was designed in SolidWorks.)


The elephant in the room of course is if there is a problem with the gcode (and the tests seem to support that) then why do they look okay in the previews of both S3D and Repetier?

What is you're setting in KISS under PRINTER-FIRMWARE-FIRMWARETYPE ?

I contacted someone from s3d and sent them my gcode, which they said they printed on a creatr, and said it turned out fine... On my leapfrog creatr however, it didn't print right

The firmware selection in Kisslicer is "5D - Absolute E"

Looks like it's still extruding but just jumping very fast (7800 mm / min) to the next point.

I tried replacing all the G0 command with G1 in the S3D file and printed it but still got the skewing (and still doesn't look quite the same in the preview). Maybe that's not enough?

How I noticed that is by looking at the preview of the Kisslicer gcode in S3D. The S3D preview has an option to view rapids, but when viewing the Kisslicer file, the rapids always show even with that turned off.
In my part there is lots of rapids across the diameter in the section where the skewing happens (no it it's not skipping steps, I tried one running very slow rapids at 1500 mm/min).
Might be a clue however.

1. Have you checked that your pulleys are tighten on the steppers?
2. Can you lower the max travel speed in firmware on printer ?

Yes. Pulleys are tight, bearings oiled etc. That was the same thing I was telling everybody else to check until I had a file in captivity that would consistently display the problem

I print lots of parts with no problems at all (well at least not this problem......)

Keep in mind that I can print this part very slow and it skews (no faster than 25 mm / sec for everything). I watched it print and no quick movements that I could see.
However I can print it with Kisslicer gcode quite fast (130 mm/sec rapids and 31 - 36 mm/sec printing) and it prints fine.

So here are what the parts look like.(I removed some of the support from the Kisslicer parts 3 and 4.) 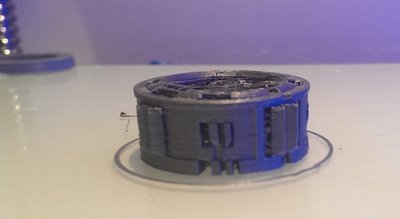 I think I found it.
I turned off retraction and the skew went away.
Now of course the part is full of strings.

I happened to be using ColorFabb PLA for these tests. The fellow that turned me on to this material said that it needed a high amount of retraction (3mm). That is quite a bit higher than I normally use, but the skew I was seeing was quite a bit more then I normally see too.

So the next test will be with retraction turned on but at a lower value to see if that results in less skewing.

Now, how I happened to try that was again by comparing the Kisslicer and S3D gocde files. Kisslicer has suck and prime settings and they were turned on (1.25mm) but I found no negative extrusion values in the gcode. So I don't know how Kisslicer is doing it.

So if this checks out, does it mean that it's a Leapfrog bug or an S3D bug???

What have you checked under G-code/G-code options in Simplify3D ?

I don't have a working printer yet, but I've been following this thread. I've noticed that when everyone says they have looked at the gcode that they have done so using Simplify3D graphical viewer. Has anyone looked the code output using a text editor? I've done that looking to see how I need to implement Mach 3 and it outputs a comment and layer # for every layer. So a simple look at the largest X and Y values in two subsequent layers will show real quick if the code sent to the printer actually leans. If the numbers on a vertical section are different then the lean is in the gcode. If the numbers are the same then the problem is related to how the printer interprets the moves.
Gary H. Lucas

Actually I am looking at the gcode in a text editor. And I did consider trying what you suggested but haven't yet.
Doing that on this part might be a real pain. The reason is because it's a very big file, a very complex part, circular, and all of the outside surfaces have draft applied in several different directions. Unfortunately it's the only part that I have that does this consistently. It might be interesting to suppress all the draft and try printing it that way to see if the problem persists.

Maybe somebody with a simpler part can try looking at the x axis numbers to see if they line up on a vertical surface.

Having said that, both the S3D gcode viewer plus the Repetier gcode viewer show a part with no skewing.
Plus turning retraction on and off makes the skewing come and go. Even if both viewers are falsely showing the part isn't skewed, it's a bug.
Locked
103 posts