I'd been doing test getting firmware retraction hooked up in RepRapFirmware.
As a baseline I first tested using S3D's software retraction. Then using the trick where you write a little text-replace script in S3D so it replaces all of it's retraction gcode with RRF G10's & G11's (and made sure my RRF's M207 values matched S3D's), and it printed exactly the same results. So that's good. But it's annoying that you have to write this little script in S3D to pull it off. I believe in other slicers, like Slic3r, this is handled far more elegantly.

Recently I read in a Duet forum post that you can actually use S3D's 'Include M101/M102/M103' 'G-Code Options', and RRF will respect that as an alternate path to firmware retraction: So, I disabled 'normal retraction', killed my scripts, and checked that option on. No more little scripts needed. A downside is that S3D no longer shows the 'retraction bubbles' in its gcode preview.

It does work but, the results are substantially worse that the other other method mentioned above. It seems to retract a 'lot more' during printing, and the overall print quality suffers in general. My guess was that it (that 'Include M101...' checkbox) may not be respecting S3D's own slicers settings when it comes to things like 'Only Retract When Crossing Open Spaces', and the side effect is it retracting a lot more often than it should. I decided to diff the two gcode files: Sure enough, the 'bad' one was retracting a lot more than the good one, confirming my suspicions.

Here's a chunk of 'good gocde' (no extraneous retractions)

And here's the same chunk of 'bad gcode' with retractions happening where they shouldn't.

Below is a a pic comparing them: M101/M102/M103 on the left, the scripted version using G10 & G11 on the right. It's hard to tell because of the DOF, but the one one the left has significantly worse surface quality all over.

I'm going to go back to the scripted route, just a headsup to the community, and the developers, since this feels like a bug. 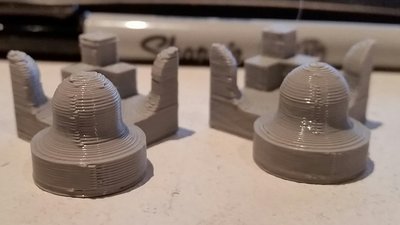