by emreerokyar
Wow, I am laughing out loud!

I've been trying to fix this exact issue since I bought S3D last week.

It's a great slicer (pre-configured settings are doing fine, supports are amazing), except that I noticed this same issue now.

. I even tried to remember if I posted here previously but forgot, yet the user name is different so it should be someone else having the same issue


Hi there, first post in group! And appreciate the help! Please let me know if there are any specific rules that I should follow before posting (other than being kind to each other).

This problem only occurs with S3D, printing the same STL on Cura (with default settings) is perfectly fine (so I think it shouldn't be hardware related). I use the default (pre-configured) profile for my printer (CR-10) both on Cura and S3D.

Have also read a lot (guides on S3D's site, FAQs etc., and also searched the web for it), tweaked a lot of settings, like;

What I noticed was that those small defects at some corners always happen when the nozzle starts extruding at that point after performing a retraction previously on somewhere else. So, I didn't try vase mode, but it should eliminate them, yet I won't be able to print anyting solid with that.

Will appreciate any kind of help! Thank you! 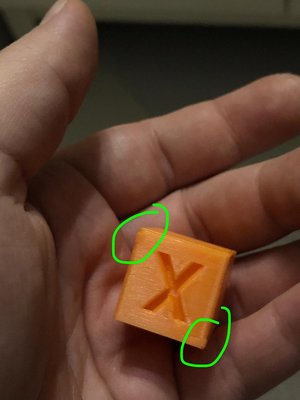 Here you can see the issue on some corners, but only on corners, the rest of the edge is perfectly aligned with the ones on top and below. 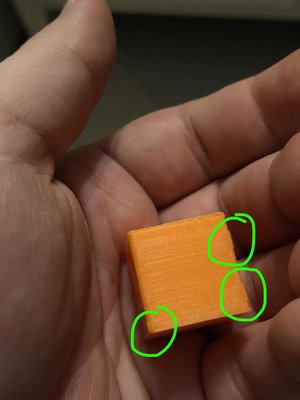 Clearly visible here, the rest of the edge is fine, this only happens in the corners.

by deZeus
Please excuse my late reply, but my printer had a more serious mistake this week. Since this is fixed now, I can turn back to the "blobb" topic.

I've increased the number of perimerters to 3. The standard cube looks now better (not perfect) so I've dared myself on a bigger model. However, the blobbs reappear. I will print the object again in the next few days with Cura, but I think I already know the result ...

So the problem is not solved for me.

by airscapes
As a newbie who has wasted a few days trying to defeat what is an obvious bug, I have wonder if I should move to one of the other slicers that looks much better.. why use S3D if the others produce better looking parts, what is the advantage? I am not being nasty, I am asking a legitimate question as this was the recommended software by MakerGear. I just bought this software assuming it was the best and did not even consider any of the others.

by dkightley
Having read both this and the other current thread about issues with zits and blobs, I have a couple of observations.....

firstly may I suggest that those few who are having issues have a think about the fact that there are hundreds of S3D users....and yet there are only a handful of users who are grumbling about zits! Does this indicate there is a software issue? Well...in my book, if only a small number of users are having issues with zits, then its not a software issue...its clearly that settings have not been tuned correctly.

My second point.....most who have posted in this thread have been changing settings without understanding what the settings are....and what the effects of the changes are. Doing so is simply "poking around in the dark"...and achieve nothing unless you strike lucky!

Zits fall into two basic types.....those that are caused by the molten filament flow not stopping or slowing down sufficiently at the end of printing from one point to another..in other words, an over-extrusion at the end of a line. The second type is an unwanted surge of filament at the start of printing a line from one point to another. This is usually caused after a retraction ( ie the filament being drawn back at the end of an extrusion and being pushed back by the same amount). So....to get rid of zits, you first need to establish which type you are getting...and then make the relevant adjustments to compensate for what you are seeing.

The settings.....fall into two types. Retraction and Coasting.

Coasting....This is where the extrusion is stopped before the extruder gets to the end of an extrusion run so that any pressure in the hot end of the nozzle can be relieved so the filament stops flowing. There's one setting....the Coasting Distance.

So....to sort out zits......check whether the zits are at the beginning or end of an extrusion run. If at the beginning, make SMALL adjustments to the retraction settings and try a print test. If you make changes in the right direction, then the zits will get smaller. If the zits are at the end of an extrusion run, then make SMALL adjustments to coasting, etc. It may take a few prints to get the optimum settings...so be patient...and NEVER make adjust two settings at the same time unless you know what the effect will be!

by airscapes
Thanks Doug, just to confirm, you are using version 4.01 and are not seeing these issues.. And how exactly can one tell if the problem is start or stop of layer or the change of z axis between layer? I get that this is not plug and play, almost a full spool of filament used printing little squares changing setting one parameter at a time 1 or 2 values at a time with no appreciable difference. Maybe this is a good as it gets and being new we expect more from molten plastic squirted out at high speed.. However when someone who has one printer and 2 competing pieces of software show images of prints that are vastly different, makes one kind of assume there is a bug in the one that looks bad..
Doug

deZeus wrote: ↑
Wed Mar 14, 2018 9:48 am
Hi,
I have a problem with the Slicer settings in S3D and I think I've already changed almost every parameter, but nothing worked.

When I'm printing, for example, the 20x20x20 calibration cube, I get blobs on the surface of the cube. These blobs are caused by the retraction of the extruder. I have changed the retraction distance, speed, acceleration and even the coast distance but the blobs are still there.

Now, I have sliced the calibration cube with Cura (v. 3.2). No special settings, almost the standard settings (even with retractions for every layer). And after the print was done, I had a nearly "perfect" cube with no blobs in my hand. So, it seems that it isn't a hardware problem, but which parameters are different? Has anybody a clue?

I would be very happy to receive an answer!

maybe you didn't read my first post completely, because then you would have read that it is a retraction problem. I posted three pictures and in one of them, you'll see the preview of the retraction zits. And when I'm printing the cube, the zits are really at these places - in complete contrast to the CURA slicer.


dkightley wrote: ↑
Tue Mar 27, 2018 9:20 pm
My second point.....most who have posted in this thread have been changing settings without understanding what the settings are....and what the effects of the changes are. Doing so is simply "poking around in the dark"...and achieve nothing unless you strike lucky!

I do not know if you mean me because I'm not a studied expert, but I say for myself that I have a rough idea of what I'm doing. But with this problem, I've run out of ideas...

Thanks for your detailed explanations of the individual attitude of S3D! I have read them in such detail nowhere.

I would like to come back to the subject again. Why do I (and some others) get in S3D retraction zits, but with other free programs (like CURA, Slic3r) they never occur (with nearly the same settings)?

by Scoobyvroom
Well I was going to start my own thread, our issues seem similar. It's almost like the coast/wipe do nothing. I have it set to do inner than outer perimeter. Here is what #12 looks like with 3mm of coasting distance. Final product. #11 on left # 12 on the right. They are identical. The other thing I noticed was a long wipe on the top of both pieces. Not sure what that is. by bonkas
This is the first port I have come across that covers this issue... I am also experiencing this.

Again I see the preview in Simplify3d showing the weird tool path which also carries over to the part.

I have calibrated e-steps, linear advance etc - Nothing has changed this.

I have not been able to rectify this with any amount of retraction, coasting, z-lift etc.
If I downgrade to v4.0 the issues appears to dissapear after importing the same profile used in 4.0.1.

Has anyone collected any more info on what could be the cause and how to rectify?

I have narrowed it down to underextrusion at the starting point of the outer perimeter. The different settings I've tried: And all this in a fairly scientific manner, only changing one setting at the time.

Retraction sweet spot seems to be around 0.6-0.8 mm @ 30-35 mm/s with tuned pressure advance. Does not affect the printing problem
Extra restart distance around 0.2-0.4 mm reduce the problem at some places, but causes overextrusion on other places.

The underextrusion exists even when printing with several perimeters starting from the innermost, and I don't think a retraction will take place between the 2:nd perimeter and the outer perimeter.

For me, I've stopped using Simplify3D unless there are need for supports, then I'll have to accept a slightly worse outer layer. Perhaps I'll give it another try to tune it once the new version is released.
All times are UTC-04:00
Page 2 of 3
Powered by phpBB® Forum Software © phpBB Limited
https://www.phpbb.com/