is it normal for the extruder tip, on the first few layers to really drag across your part? on an occasion i have had it drag up an outer wall on the first layer or two and i have to start over. seems like it gets less and less the more layers go down. does it less when i print direct to the glass. does it real bad if it print on tape but it also doesnt rip up anything when i use tape because its so bonded. i am using the high pla settings for the m2. bed is perfectly leveled. when using the leveling wizard i have the gap to .007"

You are starting your prints with your nozzle to close to the hbp, adjust the z-stop to somewhere between .2 to .1mm nozzle to bed depending on your layer thickness you have set. If you use blue painters tape you have to adjust for that also, manually or with z-offsets in the g-code settings area.

hey chuck, thanks and thats what i thought but using a feeler gauge i have the bed set at .007 and thats about .2mm and my first layer i have tried everywhere from 85%-150%. it really seems like my first few layers dont go down smooth and with a rough surface my ext tip is hitting all the irregularities. the more layers go down, say around 5-6 then everything smooths out and i dont get that anymore or atleast very little. of course you only hear it do this on the rapids when it moves from one side of the part to another. to give you an idea i'll post a pic of something 2nd layer. maybe the first few layers always look like this, im not really sure since this is my first printer and i have nothing to compare to. i did try this same part in slic3r and in that the first layers seem a little cleaner. that by default is set to a .35 layer height for first layer but it will up the output and make a 200% extrusion width. if i make my first layer height that high in creator there doesnt seem to be a way to increase the flow just on that layer and my filament doesnt stick. funny slic3r seems to like thick and heavy first layer and creator likes thin low first layer to push the material onto the bed. sorry if this is all noob stuff. if anyone has any tips it sure is appreciated. other than first layer and no top capping, thats the only trouble i have. prints always seem to come out fairly clean. 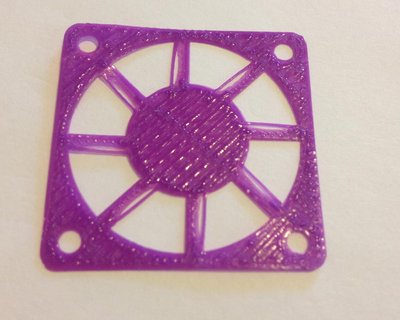 Adding some Z-lift will take care of the rapids during a layer if you are using 1.1.5. (Before this, during a rapid, the Z would lift, then come back down, THEN the rapid move would take place. In 1.1.5, S3D fixed this so that the Z lifts, the rapid move happens, then the Z comes back down.) Maybe 0.2 to 0.5 mm is all you need. One downside to this is that the Z-axis moves are fairly slow, and the lift takes place regardless of the length of the rapid, so it adds some time to you print.

(A I think about it, it would be nice if there were a threshold on the length of the rapid that would trigger Z-lift.......more than, say, 5 or 10 mm, perhaps, would be a good trigger point. Or maybe it's there and I just didn't notice it......)

But adding Z-lift will not be a total solution until at least 1.1.6 --- I observed and reported an issue where, when going from one layer to the next (with no Z lift), the rapid move occurs before the Z indexes up to the next layer height. I suggested the layer-to-layer Z index take place BEFORE the rapid X/Y to avoid CLONKing the part. And the layer-to-layer rapid, for the part I'm tweaking now, is quite often more than half the length of the bed!

For now, it might be worth it to just once try adding the Z-lift for rapids (and maybe some retraction and/or coast to avoid blobbing during the lift) and see if that helps.

I'm a big fan of the Jog controls. So this is how I do it.

Setup the skirt outlines for 3-5 and watch it carefully along with the first layers. If you see , not sure what the term used is, excess material just use the Extruder jog dial down, sometimes to 50 for the first ten to 20 layers. Turning the speed down as well helps. Gradually increase both as the desired layer quality is reached.

The dark layer is from a previous purple print.
Post Reply
6 posts • Page 1 of 1