So I have a TAZ 5 printer and mostly print ABS. I just bought a roll of PETG to try out and while the print looks really good the top is horrific. I used the same basic settings I use for ABS except the temperatures.

So on the left cube I thought it looked a little hot and maybe not enough layers so that's when I printed again a 5c cooler and 2 extra top layers but it came out even worse. I just tried again with at 245c 8 layers and it looks the same as the one on the right.

So, do I need the cooling fan on or something?

The only other issue is the left cube has a very slight elephant foot otherwise the sides are straight and smooth, the bottom is perfect looking.

I am about to try again with a little bit of fan on but I thought I would go ahead and post the question here as I may be spinning my wheels. 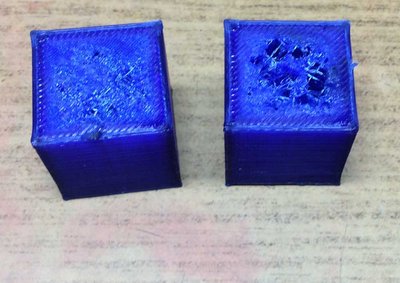 you need to remember that petg doe not bridge well at all. what you see can be a combination of a few things.

for #2, to give petg any chance of bridging it really needs to be pumping out a good amount of filament. low layer heights just put out such a small amount that the extrusion just breaks apart when it hits a gap/ space between infill.
# 3 if your infill isnt printing clean then be sure your not using rectilinear infill or any of the other infills that only print every other layer. if you need to use one of these then you need to bump up your infill extrusion width. this is like an extrusion multiplier for infill. usually 130-140% is sufficient.

I have the most experience with Slic3r, so I'll use it for comparison here:

Slic3r addresses this issue by noticing the fact that printing the first solid top layer over sparse is exactly like printing lots of smaller bridges. It uses bridging speeds and fan settings for the first solid top layer. It also adjusts the extrusion overlap/spacing so the strand it's printing doesn't drag and tear the one it just laid down (that's what causes the big gaps as in @tmorris9's photo).

I would REALLY like to see S3D offer a check box that requests that the first top solid layer be printed like a bridge. Or alternatively, that the first top layer be evaluated to see if it matches the bridging criterion (that is, if it is spanning an area that is larger than the "Unsupported area threshold" setting) and to use bridging parameters.

A second feature that would make an immense improvement to S3D's performance printing over sparse infill with more challenging materials like PETG would be to again take a hint from Slic3r (and maybe others) and automatically grow the first solid layer over sparse infill so the solid layer is supported at the ends by the infill. As it stands: imagine you have a part that looks like a staircase. The first solid layer of the first step will end where the part goes vertical toward the second step, but there is not necessarily an infill line directly supporting this area. Slic3r will extend the solid layers for the first step further under the second step until the edge of the layer is supported by a sparse infill line underneath. S3D currently (so far as I can tell) simply ends the layer in mid-air, and this does not go well. The only workaround I'm currently aware of is to use a large number of "top solid layers" and... hope it works each time.

I purchased S3D because I was having big problems with Slic3r's flow calculations. Correct extrusion amount is more critical with PETG, and despite lots of work, I still end up with lots of strings and blobs on the outsides of my prints, and lots of strings and rough infill when slicing with Slic3r. S3D makes beautiful first layers, beautiful walls, and extremely clean infill (if I use grid, triangle, or full hexagon) for me with PETG, but the top layers are absolutely embarrassing when printing with otherwise very reasonable speeds and settings. I can somewhat mitigate the problem shown in @tmorris9's picture by making solid infill go VERY slowly and using more solid layers, but this is a frustrating waste of performance and filament, especially on larger prints, because the only real problem is with the FIRST solid infill layer, and slowing down the top layers using "Solid layer underspeed" slows them ALL down.

Said another way: S3D is making cleaner, nicer solid PETG layers at 40mm/s when printing directly on the build plate or printing over 100% infill than Slic3r was doing at 20mm/s, presumably due to better flow calculations and other refinements. But when printing top layers over sparse infill, S3D is doing very badly, at least with PETG, and it seems to be because ignores the sparseness of the layer below and plows ahead as if it were fully supported. I think there are a couple things S3D could do to improve the situation, as laid out above, which would greatly improve print quality in these situations without wasting time or plastic. I know the printer is capable of doing it because those portions of the prints come out well when slicing with Slic3r.

A note on @jimc's advice:

Your advice is appreciated and will help to an extent, but:

#1 Sometimes you want to print PETG hot to get stronger prints, and other slicers are able to print at these higher temps (and speeds) without this problem. I'd like Slic3r's top solid layer performance combined with S3D's performance everywhere else.

#2 Larger layer heights will print larger lines in the solid infill, which can help, but again, we know the printer is capable of printing these finer layers if the slicer treats a solid layer printed over sparse infill as a bridge (which is what it really is).

#3 In my case, the infill S3D is printing is beautiful, just like the walls, so that's not the issue here.

Here is an example of the problem.

In the attached screenshot, S3D is trying to print the bottom of holes that don't go all the way through the part into thin air, because it doesn't take into account that solid infill layers need something to attach to.

The circular pad to the right of the toolhead is largely printed into thin air.

Slic3r, when printing this same part, makes sure that this first solid layer extends to the edges of the sparse infill below it. [EDIT: *snip*... this is not entirely true. Slic3r does something different here and it seems to be more sophisticated than just extending the solid layer a fixed amount, but it's not clear exactly what.]

At any rate, S3D seems to require at least 4-5 solid layers in situations like this to cover up its naive handling of the first solid layer, and even that is sometimes not enough... and even when those 4+ layers make a successful print, the quality of these areas is quite poor compared to Slic3r's output with fewer layers.

I'm arguing that S3D should learn from this and improve. 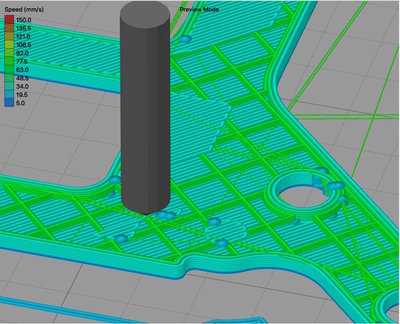 I am printing tonight with PETG for the first time, and came to this thread by searching for help. I am experiencing exactly the same problem - first solid layer is so bad that it ends up leaving bumps behind that have to be overcome in successive layers. I even had to pause the print and use a file on a couple of the bumps. Turning on the fan helps, but there is no way to tell S3D to turn on the fan for the first solid layer - as mentioned above, S3D doesn't treat a first solid layer like a bridge, which it really is.

There is a lot that S3D does well, but some of what it does badly makes me regret buying it.

@tmorris9.
The basic issue you have is not enough top layers for the infill but the problem really is the infil % is way to low for PETG. You should be at 30 or more. Temps are ok.

Here is a great write up on printing PETG. I followed this advice and have had pretty good luck right from the start.

Sorry to bring back a super old post, but my top layers look identical to the OP photos. Were you able to find a remedy for this?

My post right above yours pretty much sums it up.
Not enough top layers or the infill % is not high enough.

I agree - I have printed a LOT of PETG. I rarely use an infill percentage below 30% with 3 or 4 top layers. I've never had an issue.

Increasing the infill density to 30+% is the surest way to minimize the PETG top layer low print quality problem.

I use multiple processes to change the infill density 3 to 4 layers before every "top" layer when printing with PETG.

Would be nice if there was an option to do this automatically simular to Dense Support Layers.
Post Reply
10 posts • Page 1 of 1