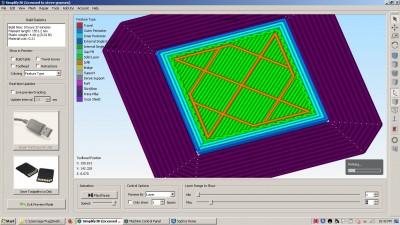 hello. see the little green squiggle between the inner wall and infill? how do i get rid of that? replace with just another strait line or something?

i think this might help me, although it doesn't say whether or not it affects infill gap between inner walls. i'll check infill documentation again maybe there's something i'm missing. https://www.simplify3d.com/support/arti ... -features/

Seeing as the existence or absence of such things as these "squiggles" is totally dependant on the exact settings you are using, without knowing what your current settings are, its sort of impossible to say exactly what you need to change!

Please attach a factory file.....File menu - Save Factory File....so someone can look at what your settings are...and provide the correct advise....

Part of the learning curve of using such a powerful slicing tool. Yes....you'll need to learn how the software works! A "little green squiggle" is something......know what it is and you know how to change it!
Last edited by dkightley on Tue Jul 02, 2019 11:44 am, edited 1 time in total.
Doug Kightley
Volunteer at the National Tramway Museum http://www.tramway.co.uk
Railway modeller and webmaster at http://www.talkingtgauge.net

ok will do thank you.

here is the attached factory file.

ps doug are you into trains? they have the eisenhower train near me, which was gifted to the US after the war, i believe it was in the UK not long ago.

I'm sort of into trains....but not a geek! My claim to fame is having 3D printed one of the most famous railway bridges in the world. Here's a YouTube video of it: https://www.youtube.com/watch?v=fyxZTt8yv80

The loco you are referring to is A4 No 4496 Dwight E Eisenhower, one of the six remaining Gresley A4s built for the London & North East Railway in Britain. And you're correct that it came back home for a reunion with its five equals....one of which, Mallard, holds the world speed record for a steam locomotive at 126 mph, which was achieved in 1938...and still stands today!

Regarding your question....I think you're not going to easily get rid of the fillet of solid infill. A supposed "improvement" in the solid infill that S3D introduced in v4.1.0 introduced some weird pieces of infill that didn't exist before the upgrade. I'll have a play around tomorrow and see if I can improve things....
Doug Kightley
Volunteer at the National Tramway Museum http://www.tramway.co.uk
Railway modeller and webmaster at http://www.talkingtgauge.net

thanks doug. i guess no harm no foul, it worried me a little bit about all the shaking and shimming when print that. but i mean so far so good.

you're a total train geek ha! we have another coal fired called the big-boy, 1 of 6. used to haul loads up the mountains in the pacific northwest. somehow we ended up with a few cool trains at our local train museum! my bro has a marklin HO and Z (mabye z?, not the really small one, the one up from it) scale of the big-boy wow talk about modeling skills! but yeah, cool stuff.
Post Reply
7 posts • Page 1 of 1