Guess you guys didn't notice the new "Your cart" link in the menu??
I would guess that's a sign that the new version is coming out soon. 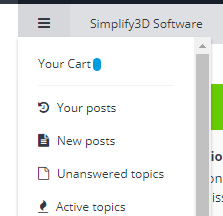 The "Your cart" bit doesn't make sense to appear in the forum login. The "commercial" side of S3D has always been a separate login from the forum (and deservedly so, from a security standpoint).

I'm waiting for the announcement that S3D is merging or was bought out by'XXX.'
It seems to me that news would flow fairly well up until V5.0 was news was approaching Dec. 2019.
The radio silence is odd...as if details are being hammered out about a team transition, merger or loss of coders.

I mean even a simple, hey we are sorry it's late and we are working on in it, here is the new projected roadmap would be nice...

We can assure you that we are working hard to release V5 as soon as possible. We have many customers that are also anxious for the new features and we are excited to deliver on many of your feature requests. We will be sharing more details regarding timing and pricing as we get closer to the launch.

Being the S3D user who has made by far the most number of posts on the forum ( more than all of the sum of the current official S3D Support users...at more than 2,200 posts), I would like to think that the S3D support and management team would possibly be more likely to take notice of any opinion I may have over a growing number of anonymous and increasingly hostile users.

Please cheer me up! 2020 has been so bad thus far....I need some good news.
Doug Kightley
Volunteer at the National Tramway Museum http://www.tramway.co.uk
Railway modeller and webmaster at http://www.talkingtgauge.net

I'm also in the product development/innovation field, so I know how easy it is for things to snowball. I agree completely with Doug. You cracked the door open long ago.
Post Reply
115 posts