Thanks to @parallyze I was able to dial in my retraction settings; at least I think I have. I now have "extra" material at the corners. I've been using the MatterHackers Retraction Cubes STL for my tests; four 10x10x10 cubes with increased spacing between them (https://www.matterhackers.com/articles/ ... -to-oozing).

I've tried to model my results to give a visual, it is over exaggerated; see below. If I measure the middle of the body vertically they all come out right around 10.03mm, which I'm happy about. However, if I measure across the body horizontally they range from 10.15mm to 10.3mm... Not acceptable. If I print just a single cube it is much less pronounced, but it still doesn't measure evenly. 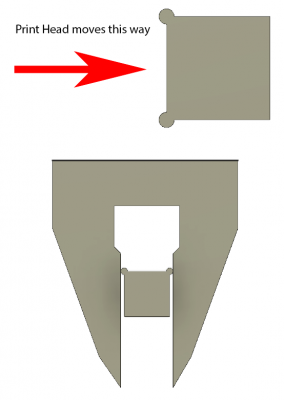 I wonder if this could be a side-effect of excess extrusion at either the start or the end of extrusion of the layer.

Try moving the layer start points around using the "Start Point" settings on the Layer tab. If you can move the oversize around this way, then you'll need to take a look at coasting and retraction settings.
Doug Kightley
Volunteer at the National Tramway Museum http://www.tramway.co.uk
Railway modeller and webmaster at http://www.talkingtgauge.net

dkightley wrote: ↑
Fri Jul 31, 2020 6:42 pm
I wonder if this could be a side-effect of excess extrusion at either the start or the end of extrusion of the layer.

Try moving the layer start points around using the "Start Point" settings on the Layer tab. If you can move the oversize around this way, then you'll need to take a look at coasting and retraction settings.

Thanks dkightley! I've not touched those settings in my limited S3D experience, so I will play around with them...
Creality CR-10S with E3D V6
CR-10 Ultimate Leveling Knob Attachment by Valstrath
Bowden Tube Clip by walter
CR-10 Heavy Duty customisable modular e3D V6 mount Volcano 5015 ABL by chito
#Let'sGoPens!

Alright, some progress and more "I don't know what to do next..." 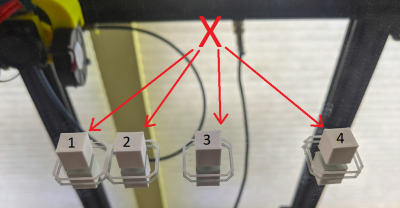 If there's only one bad corner now then it sounds like overshoot which is probably a loose belt. That's the simplest answer anyway. The more complex answer is that it seems like it's for all corners, it's a known problem which Klipper is designed to fix.

I don't think we have a loose belt here....particularly as the photo clearly shows an over-extrusion on the corner of the layer where the extrusion starts and finishes.

More investigation is needed now to establish if the issue is either at the start of the layer....or at the end of the layer, and I think some reading is needed to help. Have a careful read through the first post in this thread: viewtopic.php?f=8&t=1980 Start from the heading "Ooze control".

What I believe is happening is either the extruder is still extruding when the head comes to a stop after finishing the perimeter around the cube....or during the move from the end of one layer to the start of the next layer (which may simply be lifting up a layer thickness) there is still some filament being extruded, or if there is any retraction (ie withdrawal of the filament before the nozzle moves, and return of the filament after the move) then a blob of molten plastic is being extruded. Either of these situations will result in the extra plastic resulting in the oversize you are describing. If you're lucky, you might even be able to see which of these is happening by watching the print in action. If not, you need to experiment.

If you've understood the description of the process and what bit each setting affects, you will see that you can adjust or introduce coasting to alter/remove any former over-extrusion, and adjust or introduce retraction and/o extra restart to address any latter over-extrusion. You may find that retraction is already in use as your printer utilises a bowden cable , so adjustment of the existing values may be needed.

I'm afraid it'll be a tweak and see exercise.....but remember one rule. Never adjust two settings at the same time. Why? Because you will not know which one actually caused a change! Be patient, and you'll get there with a bit of luck.....and report back your findings.
Doug Kightley
Volunteer at the National Tramway Museum http://www.tramway.co.uk
Railway modeller and webmaster at http://www.talkingtgauge.net

Thanks for all the info Doug! Here's a small update.

I've spent quite a few hours printing cubes, see image below. The best I can get for the bigger corner is 10.2, which is significantly better than 10.6. Am I being too picky? That just doesn't seem like a good enough tolerance.

The last test I did I went back to Start Point > Optimize to see what'd happen. Whereas before with Optimize I'd get two of four corners that were bigger, after all my tweaking it seems to be down to just one corner... For whatever that's worth.

Anyway, I'm trying to print something that I actually want to use and I'll see how that goes. Previously this part had vertical lines running up the length of the part; viewtopic.php?f=9&t=15032. I'll post an update once I can compare them. 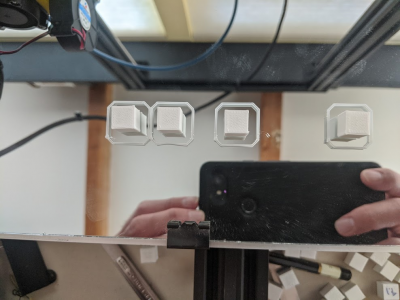 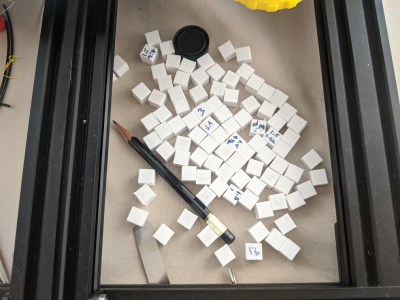 I wish I'd recognised that other thread was started by you!!!

It reinforces what I've been saying that this oversizing IS due to over-extrusion that can be addressed by tuning the ooze control settings. Doing the same will address the vertical line....which is exactly the same thing...over extrusion at either the start or end of extruding the perimeter for one layer...or should I say, every layer!
Doug Kightley
Volunteer at the National Tramway Museum http://www.tramway.co.uk
Railway modeller and webmaster at http://www.talkingtgauge.net

Nowadays most of them do have some kind of high speed/fps mode. Have a close look at the slicing preview, you should see on which corners the retracts are placed. Try to record 2-3 layers while printing and look very, very closely.

You might want to consider printing maybe 6-8 cubes at once - but split into 3 or 4 processes with different settings. This way you don't have to start a new print for each modification and you could follow the very good advice of Doug: Never change more than one parameter at once... ^^

I think you missed the second part. Your extruder is over extruding every time it slows down or stops due to the built up pressure. That's why every corner is bulging slightly. There is no setting in S3D that can help that. Klipper implements a feature called pressure advance which basically does an extra restart and coast on every line segment. It's requires a bit of extra fiddling but it is the answer you're looking for.
Post Reply
11 posts