My part consists of 2 colors on a dual extruder printer. Each color essentially creates a bunch of islands laid out in a square. Simplify3D does an excellent job hopping from island to island in a continuous path around the part but for some reason, often, it wonts to start on an island far from the extruder. This causes oozing to be dragged over finished areas as the extruder passes up locations it needs to being printing. This also causes it to finish the layer far from home which in turn causes it to drag oozing over finished areas once again.

Take a look at the screenshot below and notice the blue lines running within the square walls. That is where extruder 1 headed out to do its layer but chose to start far from its home position and work its way around from there. It also ends up returning home from that position. This causes little bits of oozing to come off on all ready printed areas.

In this case it seems that the problem mostly occurs near the window far from extruder 1's home position but it does this even if I create a similar example out of simple blocks with no windows but its hard to see in a screenshot, you have to watch the simulation or actually print it to see but it typically starts and finishes far from its home position in any similar 2-color pattern that I have created.

Any advice is greatly appreciated. 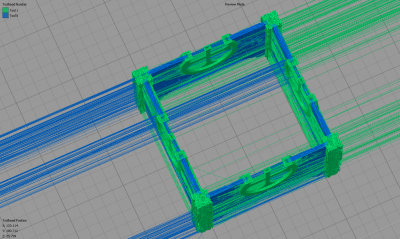