It would be great if we could tweak a few other settings for the very first layer above the new and improved v4.0 raft. Specifically, Outline Overlap and Extrusion Multiplier. Because this layer is raised above the raft for easier separation, the extrusion isn't pressed flat and spread out as it is on all other normal layers. As a result, the fill does not get adequate overlap with the perimeters and itself (as shown). For this layer, I suspect that the outline overlap needs to be boosted to 50%+.

Also, the extrusion width itself is not adequate on the first interface layer. Increasing the extrusion multiplier for this layer might work and could be an easy fix. But it might just extrude too much material and make the part bond to the raft too much. A more complex fix would be to add more densely packed passes that accommodate for the thinner extrusion width. At the code level, this would be equivalent to overlapping passes to accommodate for the thinner extrusion width. Or rather, look at it like the printer has a narrower nozzle opening and just needs to make more passes to properly fill the the interface layer without creating gaps.

Thanks for any consideration on this, 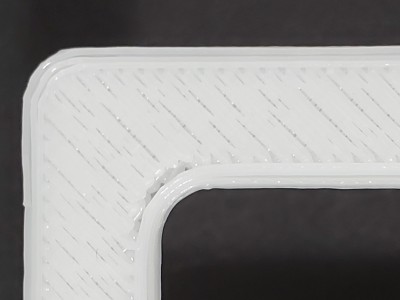 Hello,
Is there a setting for selecting one of two or more surfaces where there should be a "Raft" option? 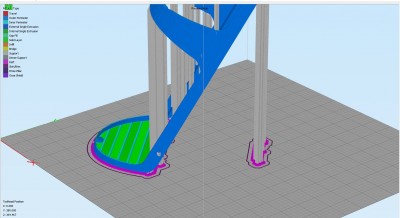 archery wrote: ↑Wed Sep 29, 2021 7:23 am Hello,
Is there a setting for selecting one of two or more surfaces where there should be a "Raft" option?

You should probably post this question somewhere other that Feature Requests and start a new thread if you want more responses.

But to address your question: Why would you want to do that? Are you really saving print time by removing the raft only on one surface? You could try adding a brim either in the software or just by modeling an added breakaway pad around the smaller surface yourself.
Last edited by Sean on Thu Oct 07, 2021 2:53 pm, edited 1 time in total.

I have found a bit of a workaround for my own inquiry. You can use the "Variable Settings Wizard" to use three different processes on the same part. I have been playing with it and have greatly improved the first layer above the raft. I am still working on perfecting it, but here is what I have found works okay on a machine with a heated glass bed, direct drive extruder, and 1.75mm PLA material.

Process 1: This is the raft and only the first layer of the part (start @ 0.0mm/ stop @ 0.2mm)- The key here is to crank up the Extrusion Multiplier to something near 1.5, Infill Outline Overlap to 99% (as high as it can go), use only two perimeters, and use a higher temperature than normal printing and increase your retraction settings. I am using the following settings for other parameters:

This jams a lot more plastic in the first layer. The 99% outline overlap drags a lot of the inner perimeter material around to fill in the gaps and serves as a sacrificial pass. The perimeters still don't bond well so using more than two of them is counterproductive. Tip- The more you increase the Extrusion Multiplier on your machine the more you will need to increase the Raft Offset.

Process 2: This is the 2nd and 3rd layer of the part (start @ 0.2mm/ stop @ 0.6mm)- For some reason, even though the above process gets a pretty nice surface on the first layer, you still need to flow more material than normal on the next layer or two to print normal on. Lower the temp to normal, drop the Outline Overlap to something like 50-60% and increase the number of perimeters to what ever you want the rest of the part to have. You can probably get this done in just one intermediate layer but I am still tweaking on it.

Process 3: This is how the rest of the part will print (start @ 0.6mm)- Just use your normal settings for printing from here on out.

The attached image is of the top of the raft (left) and the bottom of the part (right) on a little squircle calibration model I am using to dial this in. You should be able to greatly improve your part quality using this general approach with some simple trial and error for your particular printer. 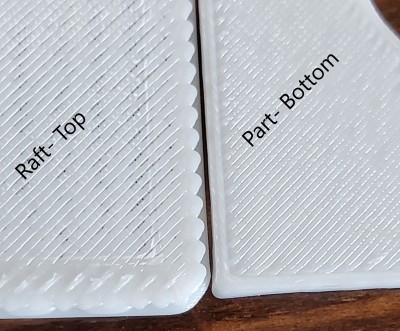 These are some great ideas and findings. I've documented this for our development team to review.
"A bird does not sing because it has an answer. It sings because it has a song."

S3D-Jake wrote: ↑Mon Oct 25, 2021 3:16 pm These are some great ideas and findings. I've documented this for our development team to review.