There are some geometries that can't infill with the same settings. For example, if you have a part that has a geometry that mostly likes single extrusion infill, but one area that would do better with gap fill, you are out of luck. This occurs when you have a corner that has a sharp outer perimeter and a radiused inner perimeter. That small area never fills properly. It would be great if S3D recognized these small infill areas and made them continuous with the inner perimeter passes. I have attached a crude drawing that shows typical outer perimeters in blue, then the modified inner perimeter/infill in purple. Instead of just finishing the perimeters, making a retraction, and coming back to do a bad job filling in that small space, S3D would make that internal most perimeter (purple) continuous with the infill. This would eliminate a retraction/restart as well as a rapid move. It would not only make the print quality better, it would make it faster and more efficient.

Thanks for considering this feature, 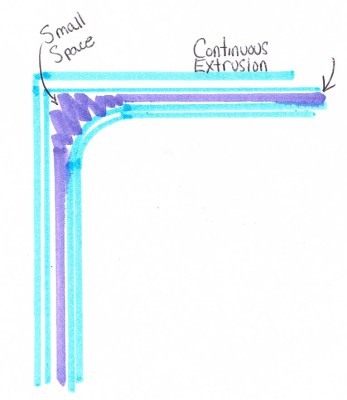