Hello everyone, i have been searching all over the support section and cant seem to find an answer to my question. I have read the "poor surface above supports" section and have done everything but nothing seems to be the fix. My main issue is attached in the pictures below. The area above all my supports are stringing too much and within the body it is clear to see each layer individually rather than being one solid part. If you look closely there you can notice that each layer is shown line by line rather than molding as one solid part. The printer is a Builder extreme 2000 with a dual printhead however there is only one extruder being used. I have tried turning the horizontal and vertical separation layers down however the supports end up sticking to the part. I have the print at a 28 degree angle because that allows the print to show all outside layers in the final printing process, I have attached a screenshot to show that the whole part is "blue" which i assumed is what is usually wanted. Here is the following information for the print settings:
-0.8mm nozzle
-PLA filament with1.75mm diameter
- extrusion multiplier: 1.15
- retraction distance: 4.50mm
-extra restart distance: -0.20mm
-coast at end (check) coasting distance: 2.00mm
-top solid layers: 5
-bottom solid layers: 5
-outline/perimeter shells: 5
-infill is on but the parts walls are too small to allow infill unless it is swapped to a 0.4mm nozzle
-horizontal offset from part: 0.7mm
-upper vertical separation layers: 3
-lower vertical separation layers: 5
-default printing speed: 4200 mm/min
-apply bridging settings to perimeters (turned off) 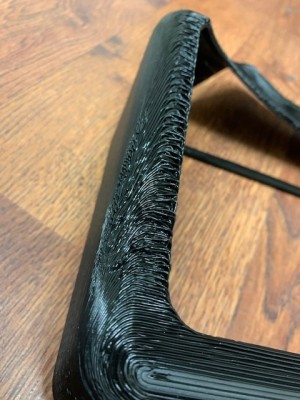 Change lower to 0 and upper to 1 and see if that helps.. Those numbers are the number lf layers to leave as space between the buildplate or part at the bottom and top of the support

Ill try that but i did that a while ago and the support fused with the model. possibly the filament was bad. Thank you.

I'm not remotely an expert yet, but did you try turning on the bridging settings on perimeters? I did that in your factory file, and it showed that most of that section in your picture would be a bridge. Bridging settings should keep that first layer cleaner on its own, and also allow you to move the support closer (0 and 1 as airscapes suggested) without the bottom surface drooping down into it as much.

Also, if you haven't already, I would recommend that you try out the dense support options. On something like this, I've had good luck setting the dense infill to something like 10 layers at 30%, and cutting the rest of the support down to 10% or 15%. It saves a significant amount of time.

I will try the dense supports although i have tried in the past and the dense supports worked in the past and the supports were difficult to remove. I am currently printing another print with this factory file provided below. The main issue is that the print takes so long already and then i switched to a 0.4mm nozzle for a finer print but the print takes a total of around 70 hours on this small of a nozzle which i think is insanely long.


The internet says that you should try slower on bridges, rather than faster.
https://all3dp.com/2/bridging-3d-printi ... t-bridges/

That factory file still has a three layer support gap on a .27mm layer height, so that part still isn't going to touch the support until it sags quite a bit. If you get your bridges dialed in better, the filament won't fuse with the support as much and you can scoot the support closer to the part.

The dense supports don't have to be "dense", they just give you the option to print with sparse supports in an area that doesn't matter. Changing the support settings in that factory file to 10% support with 10 dense layers at your normal 25% cuts your print time by 25% and your filament use by 32%.


Brochel27 wrote:
... the print takes a total of around 70 hours on this small of a nozzle which i think is insanely long.

I'm learning how to use our new Modix Big-60, and that doesn't seem out of line for a big part like this with all that support.

Thats a huge help, not sure why it changed to 130 but i had it set to 50% for the bridging multiplier originally. I will try this way i am also curious if there is recommendation for how the part should be printed? Whenever i print the part flat it doesnt show as a solid "blue" outlined part as it does when printed on an angle. Not sure what is the best angle and position because past prints has made the part not stick to the build plate as if its free floating, others are too difficult to get the support out. So what is recommended for the horizontal, upper, lower, and layer height for this print with the bridging changed?

What is your layer thickness?

You said .8mm nozzle in your original post. .27 is a pretty heavy layer for a .4mm nozzle, so I'll assume your original nozzle size post was correct.

There have only been a couple of very unique situations where I used anything other than one separation layer. Anything more than that gets messy above the supports (like you're getting here).