This problem has plagued me off & on for years, and I see plenty of posts from other users with the same issue. It has reared its ugly head again, and I started posting in reply to another user's post on the same problem before I noticed he was posting in the general forum, and not the Troubleshooting forum, where I think this belongs.

It includes a couple factory files and photos of the problems I've been seeing. I'll try to summarize, and then throw some new info into the mix.

Basically, I'm getting gaps between inner perimeter passes. The defects are repeating layer upon layer, so you end up with a delamination between the perimeters. I've have experimented with a very wide range of settings for thin wall behavior in the Advanced tab, without any effect.

Here's a picture of a small chunk of a larger model that I've been using to test things: 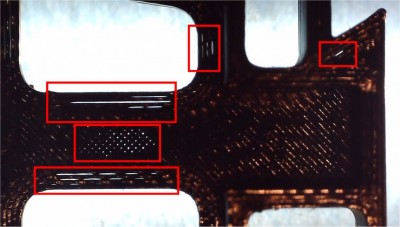 I've managed to improve things a bit since this. I changed to a new spool of filament, re-calibrated my extrusion multiplier, adjusted the temperature, etc. and that got me here: 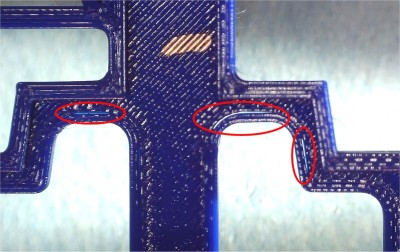 Still lots of gaps. I posted this with my factory file in the other thread, and the user "airscapes" was kind enough to take a look at it, and provided me with a modified version he felt should work better. He changed a number of thin wall setting in the Advanced tab, decreased the number of perimeters from 3 to 2, and changed the print order to inside-out. His settings produced the following results: 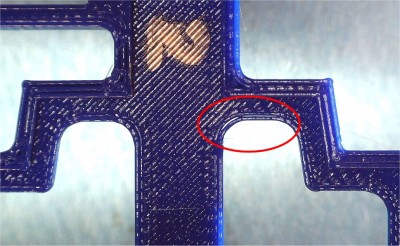 I still have gaps, pretty much just as bad and in the same locations. There are gaps that didn't show up well in this photo because I couldn't get the camera lined up exactly vertical over multiple areas so the backlighting would show through. I did notice that the gap appears between the last perimeter and the 2nd to last. In my 3-perimeter process, the gap is between pass 2 & 3. Airscape's process with 2 perimeters has the gap between 1 & 2.

The section where the gaps occur is 2 mm wide, which a 0.4 mm extrusion width should fill exactly, with no thin wall treatment required. I modified the model so the problem area was only 1.9 mm wide, and that made no difference.

It looks like it's underextruding, but if I print a 3 perimeter test cube, the walls come out 1.2 mm thick exactly, with no gaps.

I did a search, and found lots of posts complaining about this issue, but no fixes. One user indicated that the problem started with 4.1, but I haven't gone back to 4.0 to test that theory. Several other users have posted that the problem does not occur in other slicers, and if I don't come up with a fix soon, I will try PrusaSlicer, although I really prefer S3D.

I think the three photos hits my attachment limit, so I will post a factory file in a separate reply.
Last edited by gwhite on Sat Jul 24, 2021 7:47 pm, edited 1 time in total.

Here's a factory file with both my current best process, and Airscape's process, using the same model.

Thanks for any ideas & suggestions!

Try changing the Outline Overlap on the Infill tab to 70%.

To me its the obvious setting to change to ensure infill reaches and bonds well with outlines.

Just watch you don't upset the finish on the outside surface where there's only one perimeter.
Doug Kightley
Volunteer at the National Tramway Museum http://www.tramway.co.uk
Railway modeller and webmaster at http://www.talkingtgauge.net

I'll try anything at this point...

Update: It's on the printer now, and it's going to have some issues... It may provide some mechanical strength for thicker sections, but there is no infil on the top & bottom, so they still have the gaps. I can see it clearly on the first couple layers. The place where I've got the gaps isn't very thick, so it's mostly top & bottom, with only a few layers of infil.

OK, test print is done. You can see where the infil is attempting to attach to the perimeter in a few places, but it's not really doing anything to close the gaps, especially between the perimeter passes: 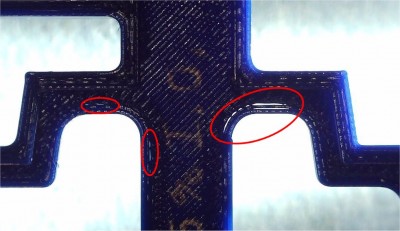 I just started a 16 hour print job, so I have some time to ponder other options & suggestions before I try again..

Things I can try are:

1) Downgrading to a previous version. I'm not sure if the factory files from 4.1.2 are backward compatible, but I can certainly recreate the settings from scratch.

My guess is that this is geometry / cooling related. The curved form of the perimeters ensures that the slightest lengthways contraction of the perimeter extrusions results in a lateral movement => delamination. So would direct efforts to that effect from finding a recipe to print in a hotter environment with less fan, experimenting with higher print speed (adjacent tracks laid down at shorter intervals), trying a different filament etc. Or even changing the curve on the parts or creating two interlocking parts that print with the same process on the same build plate such that they slice to give filament lengths/directions that won't tugging create delamination.

Thanks for the comments & ideas.

I've had the same defects with two different spools of filament; a well use black that had been exposed to humidity for a while, and a brand new spool of blue, both PLA+.

I figure one of the two things is happening: A) It's underextruding for some reason, or B) S3D is spacing the perimeter passes too far apart.

One thing I want to try is to cut apart a model, and remove & measure the thickness of a bad section. I can compare that to the thickness of a single wall cal cube, and see if they are the same. That will tell me if it's under extruding.

I've also tried printing at 3 different temperatures, mostly to deal with stringing, which seems to be worse than usual with the new spool of blue. eSun PLA+ is supposed to print from 205C up to 225C. I usual print at 215C, but I've tried 210C and 205C as well, and it had no effect of the gaps.

It may be related to a problem I ran into with under extrusion caused by oozing during a long travel movement when you don't retract first:

3 things you should do if you have not.
Measure your filament diameter, you will find it is not round. No filament made by Esun is EVER EVER EVER 1.75 round.. it is 1.67 x 1.71 or 1.70 x 1.72 etc.. you must drop your filament diameter OTHER TAB to an average of what it is.. I typically will use 1.68 or 1.70 depending on how under it is. This number is factored into extrusion and if you extrusion multiplier is "perfect" for one diameter of the roll it could be way under when you hit a thin spot and they do exist (thin spots) just pull out 10 or 12 feet and measure it in different places.

The other thing is a perfect .4mm thick wall is under extruded.. a .8mm 2 wall square is under extruded.. you have a .4mm extrusion width, there needs to be enough plastic for those round walls to stick to each other well.. so a wall thickness of .02-.03 larger than model would be best and always us 2 wall models. Using a single layer height square can be very telling as to your proper Z offset and extrusion multiplier. It is better to error on over extrusion and have solid parts that might be slightly larger but have no gaps.

Not sure if you are using a btouch but if not, you need to set your z offset to a happy medium between your highest and lowest point on your bed otherwise you get stuff like this happening in low spot. I assume you when you try and reproducer this you have the same result no matter where you place the model on the bed.

Print the attached .2mm model and hold it up to the light when it is done.. see if you have gaps between the thread. If you you need to do one or more of the above. If I get time I will switch my Pinter over to .35 mm nozzle and print your factory file to see what happens. Did you print the factory file I posted and if so what was the outcome???

Thanks for the suggestions. The third photo in my post above is using your factory file settings. It made no significant difference in the gaps.

The error in the filament diameter is going to be minor compared to what I'm seeing in the print. I get the same gaps, in the same locations from two different spools, with probably over a dozen test prints. There is no way this is a random variation in the filament characteristics.

I cut up one of the recent test prints so I'm using the latest settings (temperature, retraction, speeds, etc.). I measured the thickness of two pieces of perimeter "wall" in one of the problem areas. The results show that the gaps are being caused by gross underextrusion. The inner most perimeter is 0.40 thick, and the next one is 0.23 mm thick. 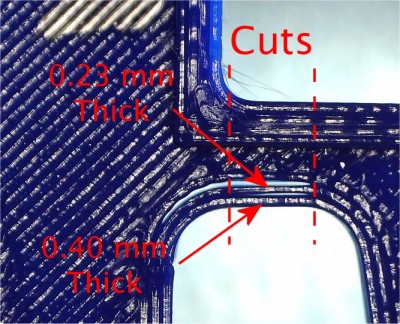 Once you zoom in, you can see that the second pass is WAY thinner than the 1st one. I'm using 3 perimeters, and although it's hard to say for sure, it looks to me like the third pass is also skinnier than it should be.

I'm beginning to think there may be a subtle bug in the thin wall algorithms. It's acting like it is trying to print a thin fill pass when it shouldn't be. That might explain why someone reported this issue appearing with 4.1 after working OK in 4.0.

One last question.. are you still printing at 66mms.. if so pleas try 40 just for fun.. wiping melted plastic around a corner at high speed will stretch it out
Post Reply
41 posts