by exxosuk
Firstly while I can increase the size of the pillars, this causes problems elsewhere..

Auto generating support is of course very useful, but this is a "global" thing. For example the part below.. 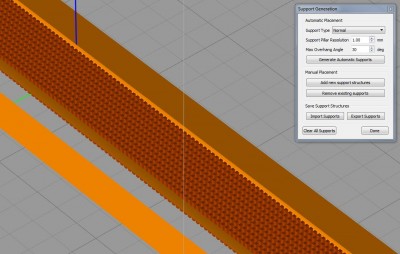 All automatic supports were fine, but I did not actually want internal ones. The only way I could find is to delete them all one by one which took ages.

So a good feature request would be to allow automatic supports but only on user selectable layers. In that if I only wanted supports over a certain height, and I currently cannot do this because it is a global thing.

But also in need some way of deleting unwanted supports quicker. It needs something like the " rubber band box" to allow selection of multiple supports to delete.

Also the pillar resolution only has squares. It would be useful if there was other shapes like rectangles and user defined shapes.

I tried to do a workaround for this. Because I can import and export support files. The problem is you cannot import more than one file at a time. I was using automatic generation from bed only for one file. Then another file with all supports, where I deleted the unwanted ones on the internal structure thinking I could then merge the first file where it had supports automatically from the bed only. However you cannot do this currently as when you import a new support file, it deletes the already added supports. So it would be useful to allow (or not) files to be merged in addition instead of actually replacing them.
All times are UTC-05:00
Page 1 of 1