I am printing a large number of the same scanned bust. Unfortunately, I am having inconsistent results from the support generation, despite all the busts being the same.

Towards the front of the build plate, the support generation seems ok, but as I move towards the back, the support under the nose begins to fragment. It is shown correctly in the preview, 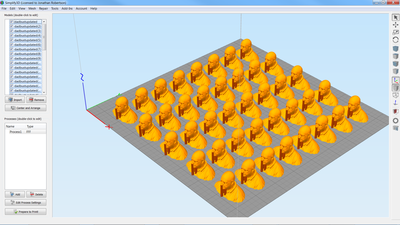 but doesn't carry through to all the models in the sliced view. This is a picture of the models with good support at the front. 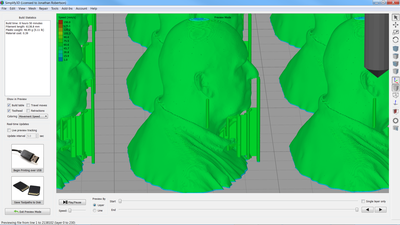 But these ones towards the back are missing the support under the nose. 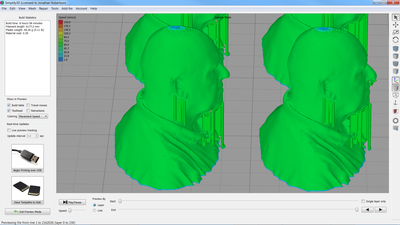 I have checked that the model does not have any errors and have reduced it as much as I can so each model is now a 20mb STL. I have tried enlarging the stl, placing the support manually then reducing it back down and duplicating it, as per a suggestion in someone else's earlier thread on this forum however, the problem still exists. I've also double checked that the program version I am using is 64bit one- the computer that I am working on has 32gb of RAM so I don't think a lack of resources is affecting it.

Is this a limitation of the program when printing many large files or is there something I can do to get consistent support generation?

Many thanks for your help

You might want to try increasing the support infill percentage. I find that gives me a more uniform toolpath

The thread describes how support is generated on a single model.....but its applicable to multiple models as well.
Doug Kightley
Volunteer at the National Tramway Museum http://www.tramway.co.uk
Railway modeller and webmaster at http://www.talkingtgauge.net
Post Reply
3 posts • Page 1 of 1