I am hoping to connect to some users of re:3d's Gigabot. I currently use Solidworks, a modified Flash Forge Creator, and Simplify 3D. I am happy with my results; however, I and am looking to upgrade to a larger printer, if it's a realistic possibility. As 6k is quite a lot of money I wanted some unbiased opinions on what users think of the Gigabot. Does it work well? How often do you run into problems with large prints? Do you feel safe leaving it to run when you go to work? Would you buy it again? How is the customer service? Anything else I should know? Any feedback you can give me would be great. Customers only please!

Anyone in the Las Vegas area that has one?

It's very similar in design to many other reprap printers out there. It's most distinguishing feature is the build volume. That being said, if you find another printer that has the build volume you need at a lower price, I don't see much reason to choose the gigabot over any other.

How big do you really need?

IIRC, the last time I looked at reviews for the Gigabot, the only thing it had going for it was size and it's print quality wasn't that great. Hopefully, it's improved in the last couple of years. To use that build volume really needs the ability to change rolls of filament and a reliability of operating for days on end without stopping. So, if the research backs that up, it could be a good choice as the frame looks solid.

If you don't need something that big, The CreatorBot 3D could be a good choice.
http://www.3dprinterworks.net/

I just started using a GigaBot XL (version 3) at work.

Print quality so far is similar to most other printers I've used (MakerBot Peplicator 2, 2X, FlashForge Dreamer). The machine is amazingly quieter than the smaller printers, which is something I didn't expect. I guess because of the shear mass of the printer, the sound is muffled a bit because it's too heavy for the motors to shake the main body.

Print quality is highly dependent on the profile settings. Re:3D did a good job with their latest Simplify3D profile. I would start with their profile and make needed modifications using it as a base. The Gigabot profile that ships with Simplify3D is not compatible with version 3. Absolutely do not use it, or you will get horribly bad print results. You can find the latest re:3D Simplify3D profiles on this page: http://wiki.re3d.org/index.php?title=In ... th_Gigabot.

With version 3, you get auto filament detection. If filament runs out, then printing is paused. This is a MUST HAVE feature for a large printer. Also, the filament spools for this printer are huge. It can accommodate filament rolls over 15 pounds in size. This is plenty enough for most large prints.

I have only used the GigaBot XL v3 printer for a short while. I don't have any long term experience with it, so I can't make any judgement on reliability yet. So far, I've printed only a handful of prints. I have had no issues YET. But all printers break down and have miscellaneous problems from time to time. This is to be expected. After I've used it to print a few dozens prints, I'll try to update this thread with my experience using it. My long term experience with MakerBot Replicator 2 and 2X, and FlashForge Dreamer printers will give me a good reference point to judge this printer by. Every printer I've used has broken down several times. The worst one being the MakerBot Replicator 2X. The MakerBot Replicator 2 and FlashForge Dreamer rarely break down and have relatively good print quality and print reliability, usually completing maybe 95% of prints without jamming problems. The MakerBot Replicator 2X would give me jam oriented print failures close to 50% after a while of use. It is horrible. It has broken down the most, and has the most jamming issues.

One quality observation I've been able to make so far is the dimensional accuracy of vertical walls is quite good. When printing a tower, the walls are nearly perfect. I don't see waves from layer to layer, which is a problem I see in my other printers to some degree. I think this is because of the mass of the printer. It's so heavy that it doesn't shake like the smaller printers. So vibrations evident in the print are less of a problem with this printer. I am happy so far with the print results.

Yesterday I printed the largest item I've printed on the Gigabot. It was a 400mm tall Eiffel Tower.

This is a FAST LOW RESOLUTION print using 0.3175mm layers. This print doesn't in any way showcase what the printer is capable of at high quality settings. 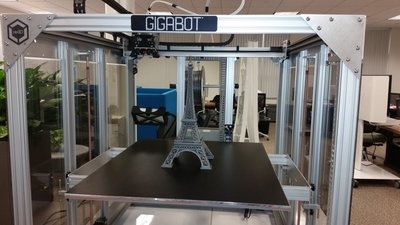 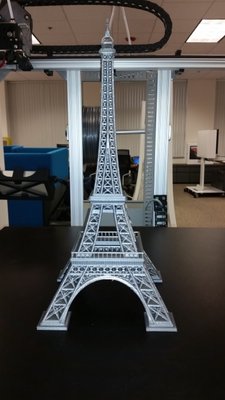 Print quality seems a bit better than a MakerBot or Flashforge for this difficult to print model when printed at the same resolution and speed. I attribute this to the weight of the printer, which prevents vibrations. These other smaller printers I use tend to vibrate a lot while printing. You can feel and hear them vibrate during a print. These vibrations transfer over to the print, unfortunately, and are evident as little waves, or echo-like results in the print. I don't see this much at all on the Gigabot prints. I am overall pretty impressed with the printer.

Anyone familiar with remove a stuck PLA part from PrintInZ?

UPDATE: I was able to remove the stuck Eiffel Tower using a sharp putty knife with rounded corners, which is apparently what PrintInZ recommends. It came off surprisingly easy with the tool.
Last edited by BaronWilliams on Thu May 26, 2016 2:35 pm, edited 3 times in total.

My experience with the Gigabot XL version 3 so far is the following when compared to a MakerBot Replicator 2, MakerBot Replicator 2X, and FlashForge Dreamer: Overall, I am quite impressed. I haven't had a single print failure yet after a dozen prints, which included one very large 400 mm tall print.

High quality settings produce prints that are clearly better than a MakerBot or FlashForge.

The Gigabot XL is currently my favorite 3D printer unless I'm printing ABS, which is best done on the FlashForge Dreamer. The Gigabot is easy to use and produces excellent quality at high resolution settings. Leveling was a real pain though. Hopefully they make leveling easier in the future. Fortunately it stays level. Moving the printer will probably require re-leveling though.

Really nice looking Eiffel Tower print! Great to hear you are enjoying your Gigabot. Keep up the good work

BaronWilliams wrote: Leveling was a real pain though. Hopefully they make leveling easier in the future. Fortunately it stays level. Moving the printer will probably require re-leveling though.

I own the GB-202. I have found my print bed is not flat. I have done everything I can to get it leveled out as close as I can get. But, I still have a variance of over 0.020" across the surface. This problem makes it impossible to reliably print multiple parts or large parts across the surface. In areas on my bed where the nozzle is too close to the surface the build "squishes" out of the sides of the nozzle and leaves a rough surface, while in other areas where the nozzle gets too far away from the print surface the build won't stick at all! So far I have only been able to print small parts on the bed in areas where the distance is just right. I purchased this machine because the company touted its large print volume and because I wanted to print multiple and large parts. The inaccuracy of the build surface makes it impossible.

I have taken the issue up with re:3d support but they refused to do anything about it. They said that the variance was " within their specification". So now I am stuck with a huge printer that I can only print small parts on AND only in the areas on my build plate that is accurate enough to do so. Overall I am very disappointed with Re3D and the GIGABOT. They took my money then left me high n dry when the flaw was discovered. I personally can not recommend this product to anyone. Since the build surface flatness and leveling is key to successful printing, the GIGBOT PRINT HUGE does not live up to it's name.

I am not surprised. The bed is aluminum after all. While the bed I use is not that off, that 0.020" (0.508mm) variation is reasonable for aluminum. The best aluminum typically has a flatness rating of 0.015"-0.020" for 1/4" thick sheets. For better flatness, thicker sheets need to be used. This is one reason some people prefer glass build platforms over aluminum. 1/4" thick glass sheets can typically be much flatter. I prefer aluminum when possible because glass breaks (I've experienced that several times). You can compensate for the reduced flatness of aluminum in your print profile.

I have successfully used a printer with a 0.023" (0.6mm) variation across the build surface. A MakerBot Replicator 2X I used had this issue. It's plastic coated aluminum bed was pretty badly warped, with a bulge at the center 0.6mm higher than at the edges. To get around this problem, I printed the 1st layer at 1.0mm high and 1.5mm thick, and printed it very slowly. In the center the first layer was very squished, and at the perimeters the first layer was a bit thin, but after a few layers everything was printing nicely. I printed hundreds of things on that printer using that profile.

If you want a flatter bed, you could always add a super flat glass sheet to the build platform. That's a very simple and cheap mod a lot of people do with their printers that takes just a few seconds to apply. That's what I eventually did for the MakerBot, allowing me to get a more even first layer.

Beware that glass breaks. If you use glass, make sure to coat it with something like a PEI (Polyetherimide) or PRINTinZ Skin adhesive surface so that in the event of a glass breakage, you're less likely to get cut by the glass. PEI is great for ABS, PRINTinZ is a good general purpose surface. There are several other options to coat the glass with as well.
Post Reply
9 posts • Page 1 of 1