First thing I want to say that although the new 4.0 version in my honest opinion
is not only about new functions but rather about already existing functions but with better
accessability and usability, is a very good piece of software and a big improovement against the older versions.
Second, I own (1 year) a Bizer CTC which I know is not one of the latest and priciest ones but is now
heavily equipped with all the upgrades avialable and very well maintained and dialed in
and makes quite decent prints as well as you could wish a FDM printer to do.

Since switching from Makerware to S3D I have been having some problems with gaps and holes in the top layers.
That could be met with increasing the extrusion multiplier but doing so until those layers wanted to appear closed
it was absolutely impossible to print a decent Marvin with the same settings.
I already got in contact with S3Ds support suggesting an extra multiplier for top layers but sadly only
got directed to the trouble shooting site which does not apply for my issues at all (no underextrusion in general)
or suggesting to increase infill percentage and top layers. The part back then had some 35% or 40% (!) infill.
How much infill should one choose? As for the top layers, 8 for 0,1mm / 5 for 0,2mm should be more than enough
and always have been, at least with the Makerware.
Now with the 4.0 Version this seems somewhat better, I now get decent Marvins and Benchys with closed surfaces.
Thank you for that!
And still I think there should be a way to manually set an extra multiplier for top-layers.
Considering this software now calculating variable extrusion widths for single infill and such should be easily
able to recognize what a top layer is and then to apply an extra multiplier....

Furthermore I printed the "waves for Benchy" with only 10% infill which should be more than enough
for this thing taking no force and weight at all.
I unfortunatelly got holes and gaps and learned checking on the print preview that S3D does not recognize
at all where it placed the infill-walls just a few layers before.
The 1st top layers of the recesses in the pictures are just printed in the pure void!
I remember the Makerware which in my opinion is a simple piece of software recognized those walls
and made the 1st of the toplayers as a bridge to the next infill-wall.
I honestly would say that S3D would do themselves a favor having such basics implemented
in their (otherwise great) commercial software.
Especially while other free ones already use those (important) logics natively.
For the part here I certainly could increase the infill, but I think, that this should not really be the solution... 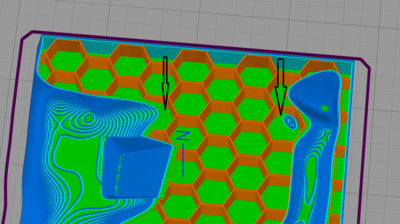 I agree. I have had quite a bit of issues with top layers being "holey" and the extruded lines not overlapping into each other, especially with Nylon, mind you this was with an 80% infill part and everything else was perfectly extruded, with no need to adjust multiplier/filament diameter. I think a top layer multiplier would be very nice, even if it was for the VERY top layer

I've been having the same issue since moving to 4.0. My top layer has spaces between the layer lines. Looking at the bottom layer it looks like it would be the same, except the first layer flattens out on the bed better (transparent filament so I can see the top and bottoms layers). Never had this problem with previous versions.

anyone ever get this resolved or figured out? Same problems here when compared to running benchy from S3D v4 vs Airwolf3D Apex software for my Axiom Dual Direct Drive.

Having same issue, small voids. I just edited a part with different hole dimensions and some features removed to see if that fixed anything. This would be a great feature.

Me too. I really wish they would add ironing (aka neosanding) as an option for the top layer like Cura has... The final print quality difference is night and day better with it turned on!
Post Reply
6 posts • Page 1 of 1