Never posted anything on this forum before as I've always been pretty happy with S3D.

I updated to V4.1 recently as the new and improved features interested me, but I've experienced a pretty big problem since then.

When the printer would end a feature (perimeter, infill,...) and would retract and start printing again, there was a lot of over-extrusion at the beginning of the new feature. Only at the beginning, it faded away as the printer would continue to print. I've started changing coasting settings (I thought there may be a lot of tension in the bowden tube) but I realised that setting coasting to 1mm isn't normal in any way. I started watching the extruders behaviour on those retractions and noticed that it was retracting a lot less than the amount it would push back after the retraction.

I dove into my G-code files and found this:

As you can see, it is extracting only +-1mm and extruding +-3mm when starting a new feature, wich offcourse leads to over extrusion. If you add up these two values you get 4.8mm, and that is exactly my retraction distance. So it is retracting a lot less than it should, but pushing back 4.8mm like it should.

I didn't know of any settings that would cause this, as I personaly don't think anyone would ever want this happening. I do know however that wipe distance, retraction distance and retraction speed somewhat go together. So I was wondering if the wipe distance would be too short to properly execute the retraction command. (although normally in previous versions, S3D would automatically alter the wipe length according to those settings). For testing purposes I tried fully disabling the wipe movement.

This is what the G-code gives me:

Seems to fully fix the problem, and I'm not having these extrusion problems anymore now. Looks like I will be going back to V4.0.1 or just not be using wipe anymore. This little issue has costed me a lot of revenue and time, happy to have found the problem but it's sad that a paid software is having these kind of bugs, when it was all good in previous versions...

Actually i was having really failed prints when "Perform retraction during wipe movement" was checked. Started on this update.

Same here. Spent a day to find it, as it appears only on exact speed/settings and model.

Here is my gcode, you can import FFF profile from it into clean S3D 4.1 with default settings and it should be reproducible, at least with provided benchy model:
https://www.dropbox.com/s/uyq4sfshhvw20 ... e.zip?dl=0 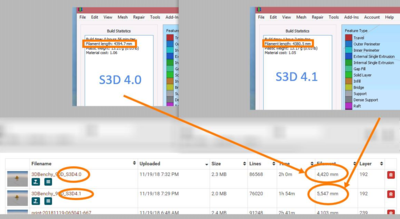 I’m happy to state that this issue with retract while wiping and retract/prime values should be resolved now in the latest 4.1.1 release. Our team successfully tested many factory files from threads mentioning this issue. No changes to your existing factory files should be needed to get the now corrected behavior. We've updated our testing procedures to more closely focus on this feature. This was just one of many improvements to the software. All of which are detailed on our Release Notes page